I wanted to share some local news with the community. A serial rapist who had been breaking into homes and attacking women for at least 5 years was caught because a woman saw something suspicious on her security camera. She wasn’t a victim and it’s not clear if she was even aware of the investigation. But something didn’t look right and she turned the footage over to her local police department. They were able to connect the dots and (after more great police work), the suspect was finally arrested. A multi-jurisdiction task force and countless hours of work finally paid off because of a $100 security camera.

Like many of you, I want a camera system to catch or prevent someone from taking a set of wheels in my driveway or a UPS package from my front porch. But, when you read a story like this, you see the added benefit to your neighborhood.

I recommend Blink which is integrated with ST, but you can also use Arlo. Both are good.

My family really enjoys my security camera setup. I’ve gone a bit overboard with 16 cameras but we like it.

The strangest thing that happened to use on our cameras was…

A family of 6 pulled into our driveway, unpacked their van. They must have been on a long road trip. Brought all of their stuff to our front door and then realized they were at the wrong house. Then they ran back to their van, threw their stuff in and drove away. The whole thing lasted 5 minutes as it took a long time to unpack and repack.

We were home at the time. It was about 9PM. They didn’t ring the doorbell, we saw them on the TV in the kitchen. It was pretty funny. We didn’t bother going outside, I’m sure they were embarrassed enough.

I also had a case where lasership said they delivered an amazon package but never did. I just told them I checked the security feed and there was no driver an hour before or after they said they delivered it. Just based on that they sent someone out to look for my package… They found it.

I am simply amazed at how few homes have security cameras on my block. Out of around 40 houses, only 3-5 (including) mine have them. They have dropped in price significantly and you can get a professional to install a system with a purchase for under $1,000. It’s the best security you can buy for your home.

I also had a case where lasership said they delivered an amazon package but never did. I just told them I checked the security feed and there was no driver an hour before or after they said they delivered it. Just based on that they sent someone out to look for my package… They found it.

Yeh. My wife ordered from Amazon and Lasership did not deliver. They kept on telling us they delivered. So I asked them for the time frame and than sent them a link to the Blink cloud stored recordings for those times. And guess what…They gave us a re-fund and apologized. I guess they got caught in a lie.

. I’ve gone a bit overboard with 16 cameras but we like it.

I see how this can happen! A couple weeks ago I put up on to keep an eye on the car, as there were people breaking into cars all over the place according to traffic on Nextdoor. As soon as the first one was up, I realized that I couldn’t see the front porch. And then it was the side porch. And then the backyard and rear door. . . . So I now have 4 and feel like I need a few more. I’m going to try to resist for now.

We had a small crime wave around here that would have been shut down much more quickly if just a few more people had cameras.

Ha! I have two more cameras to install. My wife keeps asking for more. All of my cameras (well most) are power over ethernet. I am currently investigating installing a few in the yard pointed at the house.

How long do the Blink batteries last? I’m thinking of grabbing a few.

What app are you using to get your video feed into a browser window? I have an old tablet that might make the perfect security cam monitor.

I use a local server running BlueIris. 16 cameras recording 24/7 needs a beefy server and lots of storage.

How long do the Blink batteries last? I’m thinking of grabbing a few.

They last over a year as of the last firmware update.
They have a referral program for those who want to by a camera and will spand minimum $99. If you give me your e-mail which you’ll use to buy, we can both get $25 discount code. PM me if you are interested.

If that offer is for anyone I will PM you, but what all is required to run Arlo? Do the cameras talk to a hub of their own or do they talk straight to the cloud?

If that offer is for anyone I will PM you, but what all is required to run Arlo? Do the cameras talk to a hub of their own or do they talk straight to the cloud?

Arlo and Blink still have their own hubs. However, Blink is basically a wifi camera and only uses its hub which is about 1"x1" sized for wakeup calls. This is what makes it such a low power use device and lets it sip battery juice…Unlike Arlo. Another thing, Blink can also run of a micro USB power cable. Making it more versatile than Arlo in my opinion. And I am speaking from experience. I tried Arlo and they chood through battery juice like a dino. The only 2 things Arlo has for them is they currently have an outdoor cameras while Blink will be releasing them by end of this year and Arlo uses IR for motion while Blink is using an Ultra bright LED for night vision. In my opinion you want to scare your intruders with Ultra bright LED light than have it hidden. But that is just me. Also, Blink will have local storage capability via the USB port on the Blink hub (Not yet released.)

I plan on buying a POE with NVR camera security system soon. Just debating what camera resolution to get.
3mp, 4mp or less, thinking an Amcrest model? Don’t necessarly need integration with ST’s, I would appreciate some opinions.

I currently have 3 indoor wireless cams looking out my front windows (I’m home most of the time & have them live on my 2nd computer monitor). 3 times different neighbors have asked me if they record, they don’t, because of suspicious activity in my neighborhood. Want to upgrade.

I recommend Blink for wireless and recording, but Arlo is also good. But use more battery.

I have a mix of Amcrest and Foscam. I am a little bias because I’ve had a bad experience with Foscam. Maybe I’m over reacting, but I didn’t like the way they handled themselves. I’ll explain.

Basically someone at Foscam thought no one would care if they put a watermark on you footage that you couldn’t remove. Basically it said FOSCAM in the bottom right corner. A firmware update caused this issue. It took them 7-8 months to acknowledge the issue and resolve it. So FYI, it is fixed now, but I still don’t trust them.

As for the cameras, about half of my cameras are the 1080p Foscam POE and the other half are a mix between the 3MP and 4MP Amcrest.

The Foscam cameras had less grainy night vision. I can tell you I have outdoor Foscam cameras that are almost 2 years old, no problem except for he watermark. My Amcrest cameras are close to 8-9 months old, no issue.

Like I said above, I use BlueIris software for camera management.

The Foscam cameras were in the list of devices used in the recent internet outage, mine where no as I always change the admin password and they are not directly accessible over the internet without going through BlueIris.

I bought 4 HIKVision cameras based on their reputation. I started with one to test. I sent my Arlo back soon after.

I’m using Synology’s surveillance station. I like it, but I probably should have bought an NVR. Synology makes you buy licenses if you want to use more than 2 cameras. . . . .

Swanny’s code nicely integrates ST and Synology. It doesn’t store video on ST, but I don’t want that anyway. It does capture an image that I can see in ST. That’s good.

I have the diskstation setup to copy my video files to Amazon Cloud drive. You can get unlimited storage for $60. The Amazon app is good for watching videos. . . .

In any case, I have three HIKVision bullets:

They were easy to get up and running. The field of vision on the 4mm lens seems a little narrow though.

And I put one of their 2.8 mm turrets on my side porch.

I can’t get a video feed on Smarttiles. The HIKVision basic authentication creates a popup that ST can’t handle as far as I can tell. So I have it setup as stop motion video. I have 3 or 4 devices running smarttiles. Two are mounted. The cameras can handle it just fine.

I also put the cameras and the Synology box on their own switch. The video stream isn’t that big, but I didn’t want the traffic causing any issues. I’m trying out one of the cheap managed TPLink switches. It seems fine so far.

Stories like this are always good to see. They also work as a reminder to people that have been on the fence about what system to purchase for too long (me).

I dont really need to integrate with ST, but have been looking for the best camera NVR system for the lowest price (not pieced together) and for some reason, Im landing on the Lorex system. 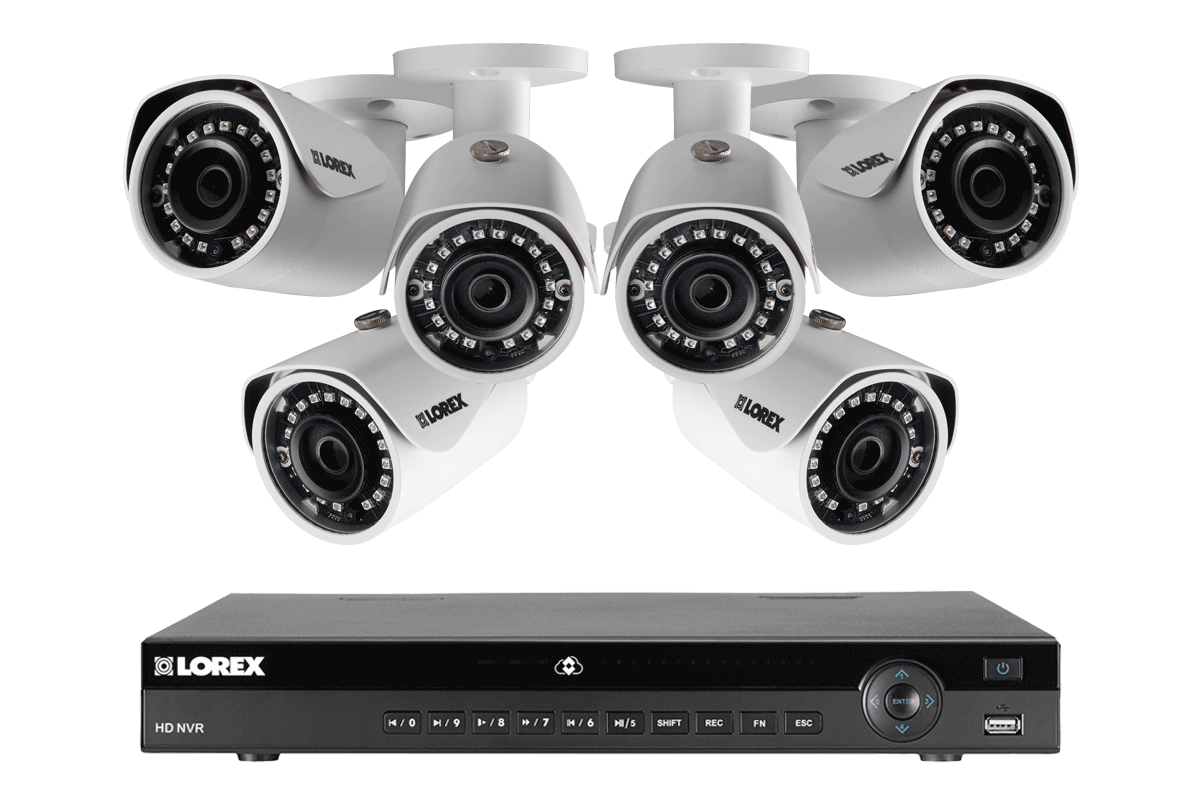 Can anyone provide comments based on the specs of the included hardware?

I’m waiting for D-Link to release a few more IFTTT cameras. What’s nice about D-Link’s IFTTT channel is that is has the triggers and actions you would expect.
Triggers: Motion Detected, Sound Detected
Actions: Record Video, Take Snapshot
I really don’t know why none of the other IFTTT cameras have this.

Anyway having these Triggers and Actions allows you to use it as a motion sensor and sound sensor in ST so one less thing you would need to buy, and you can use any ST trigger to tell the camera to take video or picture.

The D-Link cameras are integrated with ST via the D-Link Camera Manager Smart App. The D-Link cameras also have on board recording available to high capacity SD cards and you can also get their DNR-202L DVR for only $69 which can record up to 4 cameras at once onto two 4TB hard drives (this should last you a really long time). I’m sure you could also set them up to store video on the cloud too if you want.

Also another really cool thing to check out is SightHound computer vision technology software. It can do a ton of recognition stuff. Face recognition, gender recognition, vehicle detection and tracking, person detection and tracking, along with the usual security stuff. It’s surprisingly inexpensive for what it can do. $60 for 2 cameras, $250 for unlimited (free for 1 low res camera).
Sighthound also has an IFTTT channel.