Want to start a smart home, have a few questions about where to begin

So I am a newbie here. I have an Echo Dot and a Google Home Mini, as well as one WiFI controlled smart bulb.

I would eventually like to expand to things like a Ring doorbell, a Nest thermostat, and a smart lock.

First question:
Do I need a hub as well as the Home and/or Dot? Are those, in fact hubs, or are they just ways to access my devices?

Next:
One of the things I was looking to do was to set it up to turn on a couple of lights when the door was unlocked(When I get a smart lock, of course), and if it was after a certain time of day. Is this possible?

Last for now:
If the answer to the second question is ‘Yes’, what are the triggers? Do I have to pick a time, or is the system able to poll things online, like the time of sunset, and adjust accordingly, so that the thing doesn’t come on while the sun is still up? Here, we will have it get dark around 5 or so in the winter, but it will still be daylight past 9 in the summer. A further expansion on this would to be to set up a notification when the temp drops below a certain point. Once it gets below 80 outside, the A/C goes off and the windows get opened. It would need to poll the internet for this info as well, so it kind of goes with the one about sunset…

Anyway, help and advice is greatly appreciated. This seems like I can have a lot of fun with it.

Welcome! Sounds like you’re off to a great start, and doing research first can help you save a lot of money and aggravation.

It’s up to you whether you want a hub or not. Different hubs have different features, but in general, there will be some “locally operating“ (meaning not Wi-Fi) Devices which will require a hub, and also most hubs allow you to set up much more complicated rules than the non-hub systems.

As far as echo devices go, it depends on the model. The “echo plus“ models and the echo show second generation (the big one, not the new little echo five) Do have a zigbee hub inside. But so far, they haven’t really offered the same kind of complicated rules options that the other hubs do, and the biggest advantage really is that you will still have voice control of the zigbee devices that are directly connected to that echo device even if the Internet is out.

At the present time, the Google devices, even the one which is called a hub, are not hubs in this sense.

The following FAQ will explain more with examples about complex rules if you’re interested in those kinds of details:

Most smart home devices allow you to set up a sunset schedule, even if they don’t use a hub. It’s a very popular option. So you just need to look at the specific models you’re considering to see if that option is available from their own app.

As far as temperature, some systems might get it from the Internet, but a lot of systems would get it from a local temperature sensor. So you can definitely do it, it just depends on the exact devices you want to use.

The first rule of Home Automation

But all in all, everything you’re describing can certainly be done even with a very basic system like apple’s HomeKit, so you’re going to have a lot of choices. Which in this context is a good thing.

Cool, thanks for the response. This definitely gives me a direction to go in. Seems like of all of the hubs I looked at, the one that most met the budget/ease of use/features Venn Diagram intersection was the Samsung SmartThings one, and then later I can get more crazy. This lets me know that some of the things I have been thinking of are totally possible. And yeah, if the Google Hub isn’t a hub, then they need to rename it. It DOES look like a nice control panel, but if it’s not a hub, then that changes things.

Cool, thanks for the response. This definitely gives me a direction to go in. Seems like of all of the hubs I looked at, the one that most met the budget/ease of use/features Venn Diagram intersection was the Samsung SmartThings one, and then later I can get more crazy. This lets me know that some of the things I have been thinking of are totally possible. And yeah, if the Google Hub isn’t a hub, then they need to rename it. It DOES look like a nice control panel, but if it’s not a hub, then that changes things.

At the present time, the Google hub isn’t a hub. It’s a control panel. But then Samsung offers its “family hub,” which isn’t a hub in this context either.

It’s a $3500 refrigerator with a Wi-Fi panel, and was named based on the concept that “the kitchen is the hub of the home.” 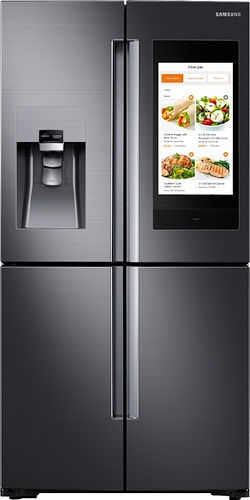 So again, you have to research the features of each individual model.

SmartThings has decent ease-of-use (unless you require accessibility support, which is a separate issue) as long as you have 15 or fewer devices and don’t use any custom code. Which they say is most of their customers. Once you step past that, it becomes a very powerful system, but not necessarily one which is easy to use. And definitely not the most reliable at the present time.

So it really comes down to what your own priorities are. There’s lots of discussion on this in the forum, just search for “reliability.“ here’s a recent discussion:

You might also find the following thread interesting, although it can also feel overwhelming, so feel free to skip it if it seems like too much work.