I have 2 Ivee Sleeks and i can say they seem to work great with Smartthings, Only basic command tho . Just turn off or turn on … But they do work … Hopefully they will integrate more commands or even a talk back…

Just realized we hadn’t included any mention in this topic of the one official smart things voice control solution: an integration with the Samsung Gear S smart watch.

I know SharpTools has been covered a couple times in this thread, but I keep seeing different avenues of voice control that others may not have thought of before. The Gear S comment reminded me that SharpTools/Tasker can be paired with AutoWear to get voice commands on your Android Wear watch (Moto 360, LG G Watch, Samsung Gear Live, etc. etc.)

[quote=“JDRoberts, post:43, topic:1337”]
Now that it looks like the harmony home and smart thing is integration is getting fixed, is anyone using IVEE with harmony home? It would be a very indirect method…[/quote]

You can also use SharpTools with the Harmony hub. Like many other people, my SmartThings → Harmony integration isn’t currently working, but if I remember correctly the setup in Tasker was pretty straightfoward. In Tasker, you create a new ‘A Thing’ Task, select your Harmony Hub, and choose the startActivity command. For the parameter, enter the name of the activity exactly as it was entered in the Harmony (eg. “Watch TV”, “Use XBMC”, or the default “PowerOff”). It sounds like @thegibertchan and team are close to getting the SmartThings → Harmony integration working again and I can post a full set of instructions when I can try it on my hub.

I know you’re primarily an iOS guy, so you should check out Assistant+ (for iOS 8), which just landed on Cydia. You can set up custom Siri commands to trigger activator functions. Use it in combination with Activate Command (also on Cydia) to turn on, turn off, or toggle switches / modes (Big Switch app) / etc. via Endpoint.

Assistant+ also allows you to customize Siri’s responses (so, @DarcRanger, you can have Siri respond in the way you asked on 2/14). You can also create your own third-party plug-in (but I haven’t done anything like that).

@tasmin asked how to use hey Siri to trigger hello home actions through Ifttt.

@kevintierney and @Sticks18 suggested using a virtual switch and the custom app “big switch for hello home actions” that sounds like a very good idea, although obviously it needs custom code.

Can someone modify the big switch app to call Hello Home Phrases?

Got my new Apple Watch sport. It’s a two steps forward one step back situation as far as voice control.

Will Poirier’s IFTTT method does work, and the voice over Wi-Fi works pretty well, so I do have voice command from all around the house, even when my phone is plugged in and charging in one room.

So far so good.

Now the one step back, at least as far as handsfree accessibility. It starts completely hands-free, which is really nice, and you don’t have to use any physical button presses to complete a text message.

However, partway through the process, Siri leaves the building. And you’re back in voice dictation for text message. Unlike the way Siri works on the iPhone, this means that you must make one screen press to actually send the message each time.

It’s not a big deal, and I can do it, but it’s not what I expected or hoped for.

Anyway, I do like it, and it does give me more flexibility around the house, because I don’t need a listener in every room. But there is still progress to be made.

updated October 2015 with the introduction of iOS nine and watch OS 2.0 we finally have totally hands-free message sending from the watch. Once you speak the first text you do you see the little display screen where you can cancel the text if you want to. If at that point, you say “Hey, Siri, Send” The message will be sent without your having to touch the watch at all. So again, a little clunky, but totally Touchfree sending is possible now.

If you have a jail broken IOS device, much discussion of extended Siri options through Assistant+ here:

If you have a jailbroken iPhone you can get a much better Siri integration with the help of a few Cydia plugins. Granted it's a bit tedious to setup, but once the setup is done it works pretty flawlessly. I'm willing to attempt a step-by-step if anyone is interested.

(Jail breaking does void the apple warranty and potentially increases the chance of malware, but some people are willing to do that to get the extended functionality.)

One can always - and easily - “unjailbreak” any ios device simply by re-installing the latest ios software. Warranty is never a concern. And as long and you change root password and do not steal software (download “cracked” apps), there is minimal, if any risk of malware.

Hi Joshua – Do you know if these instructions have been updated recently?

Would be great to give this a try…

Tasker has been updated since the original instructions were posted. You now have to select the App that the plugin was distributed with… so for step 12 it would be Plugins > SharpTools > A Thing

Thanks again, Joshua. Gotcha – but then on Instruction line #14, there is no " ‘tag’ icon at the top of the screen." Sorry to be tedious! Thanks for your help!

@CHallMD can you send me a screenshot? When you are in the SharpTools > A Thing configuration screen (within Tasker) you should see a tag icon at the top of the screen: 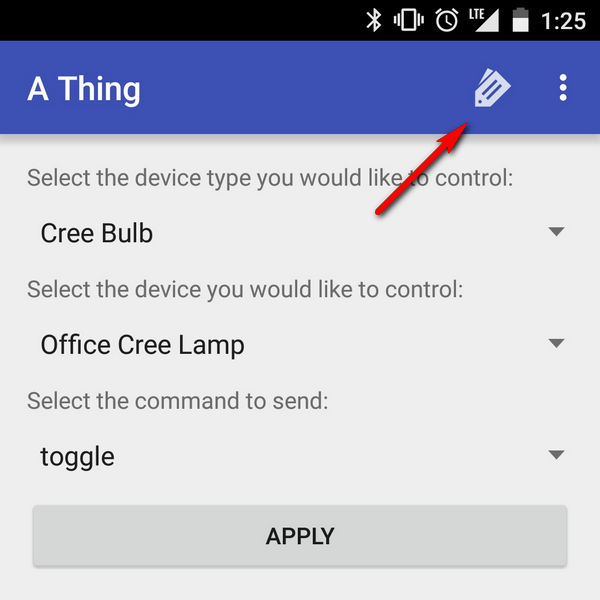 If you aren’t seeing it and you are on a phone that has a physical menu key, try pressing the menu key.

Tapping the tag icon allows you to use Tasker variables for controlling your device. In the case of the tutorial, we are taking a spoken command and capturing parts of it as variables which are then passed to SmartThings via SharpTools. So when we say “OK Google, Turn [off] the [bedroom lights]” we are passing the word ‘off’ into the command variable and the words ‘bedroom lights’ into the device variable. This allows SharpTools to determine that it needs to send a command to SmartThings telling it to turn the bedroom light off. 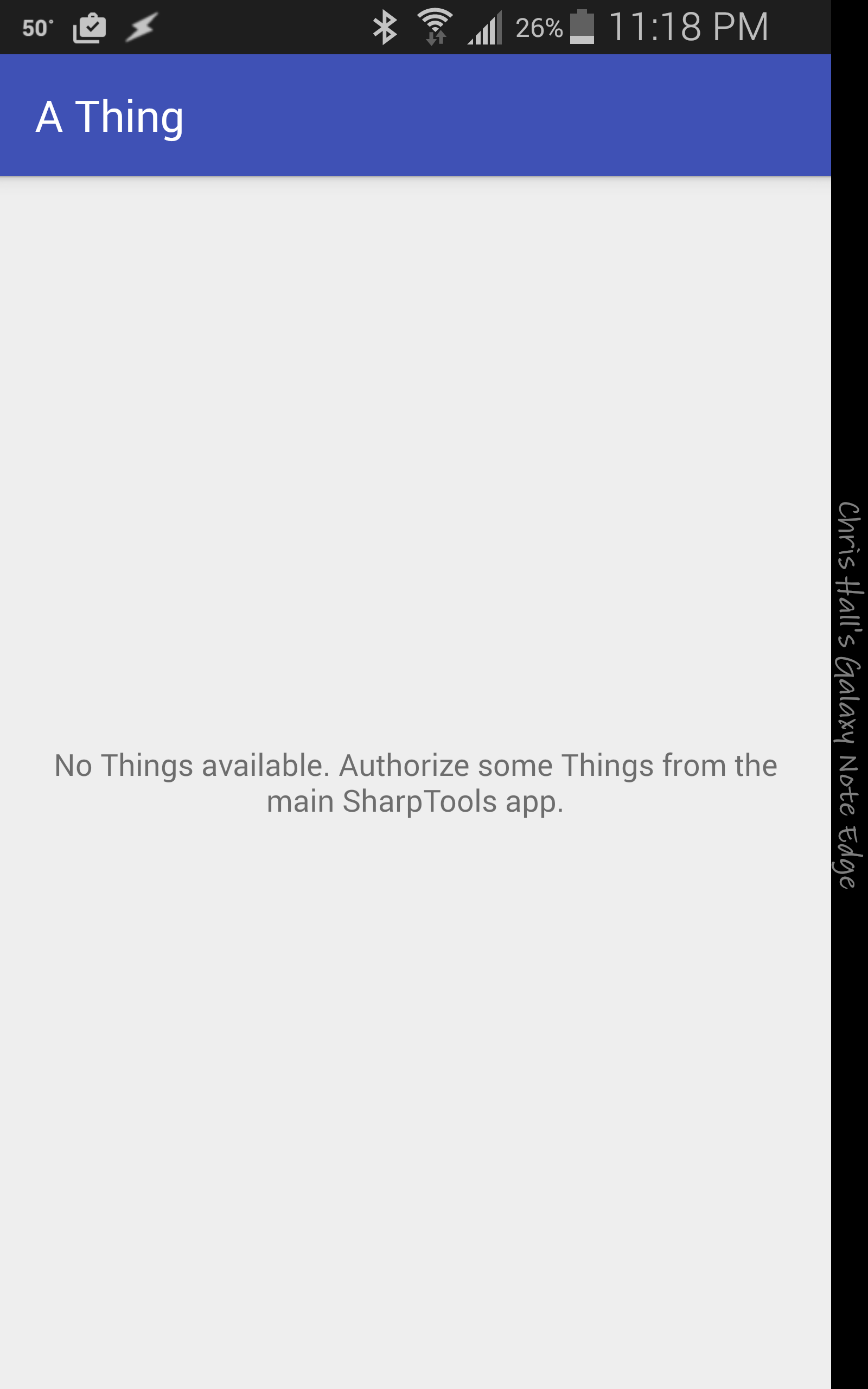 Perhaps @April could move this back out of the “ARCHIVE” as it is a very active, and informative thread…?

Perhaps @April could move this back out of the “ARCHIVE” as it is a very active, and informative thread…?

Yes, @april , I would suggest putting it into Devices and Integrations:

Hi Joshua – Still trying! I authorized some devices, but now this is what I get. Sorry for all these tedious messages… 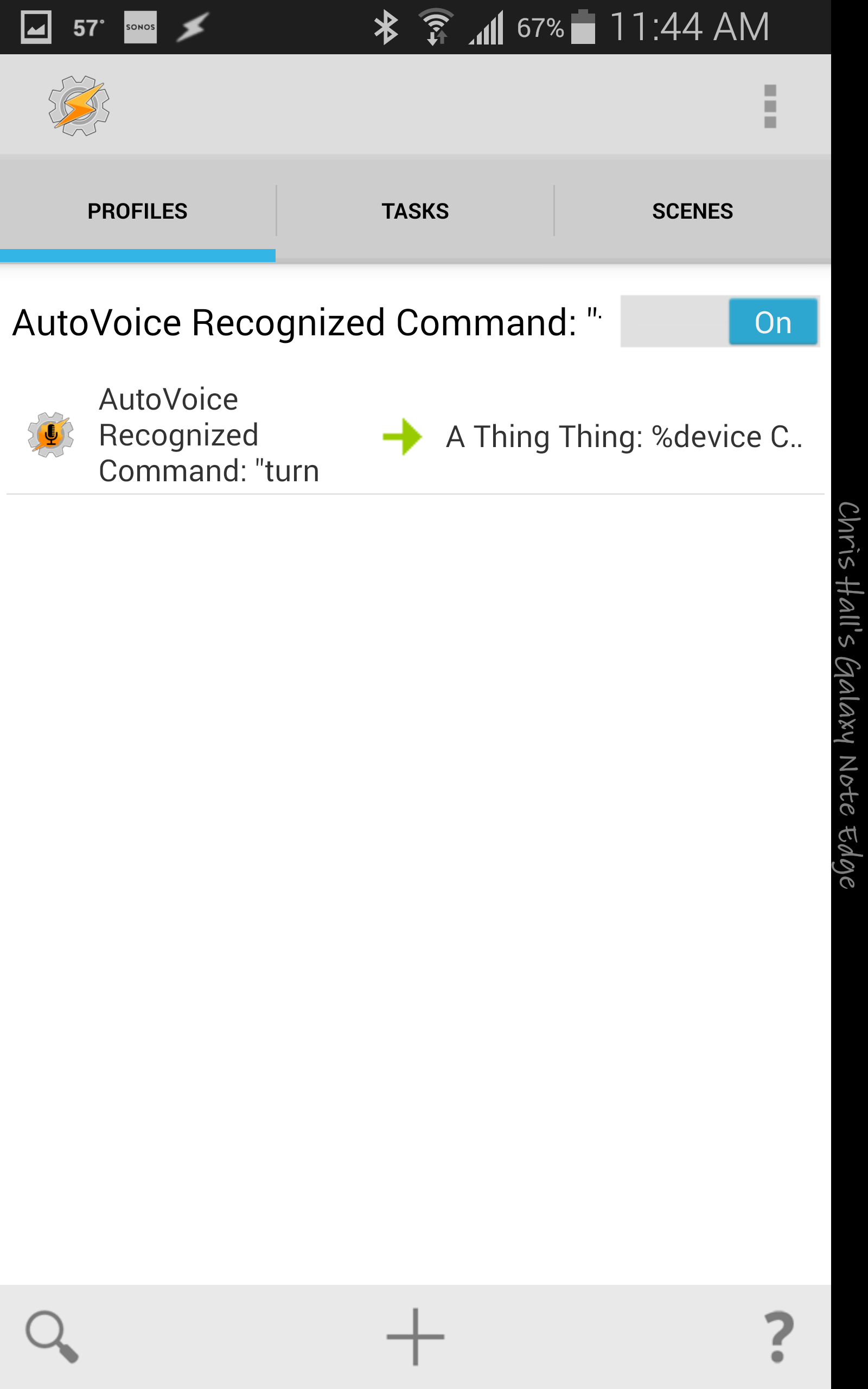 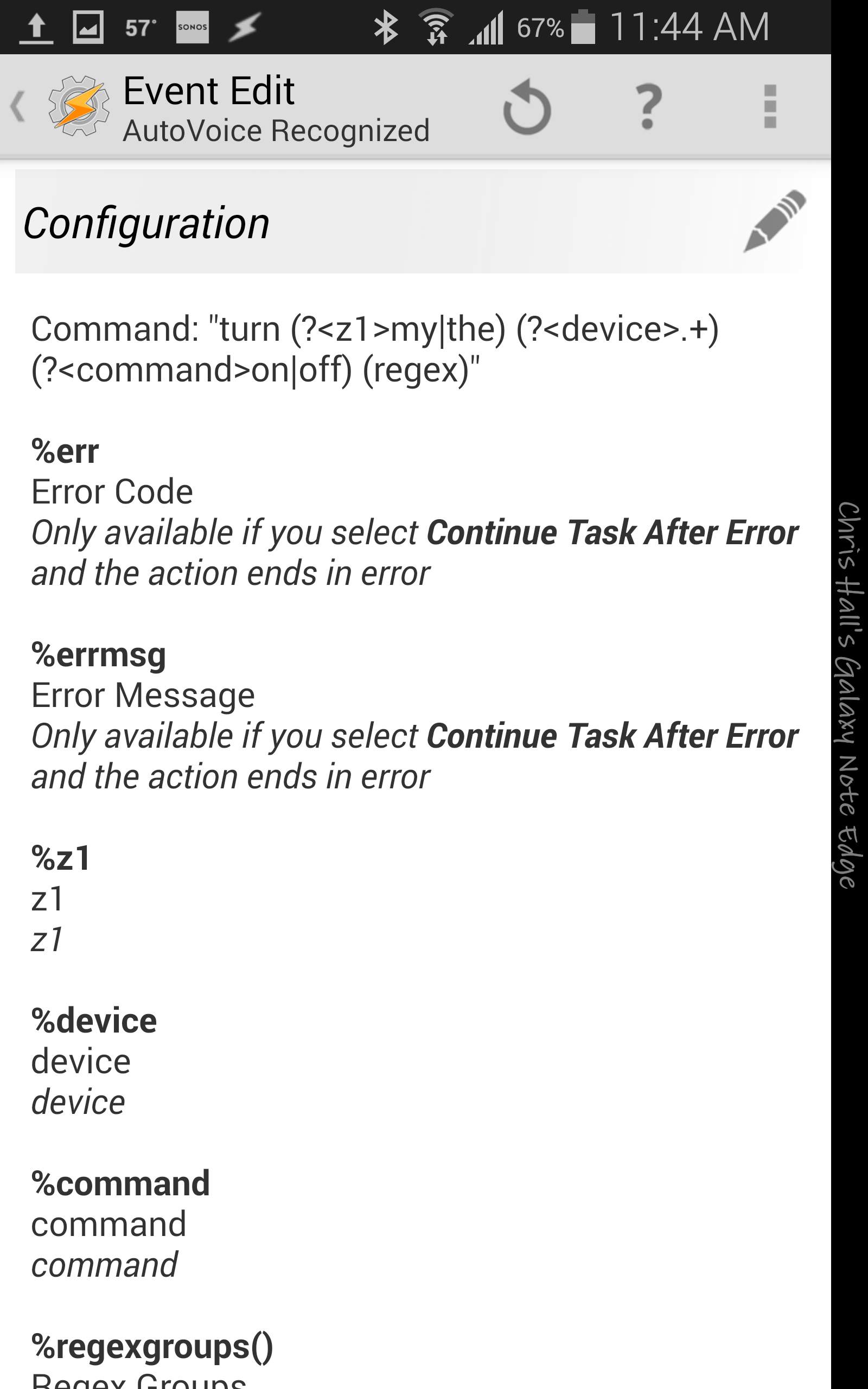 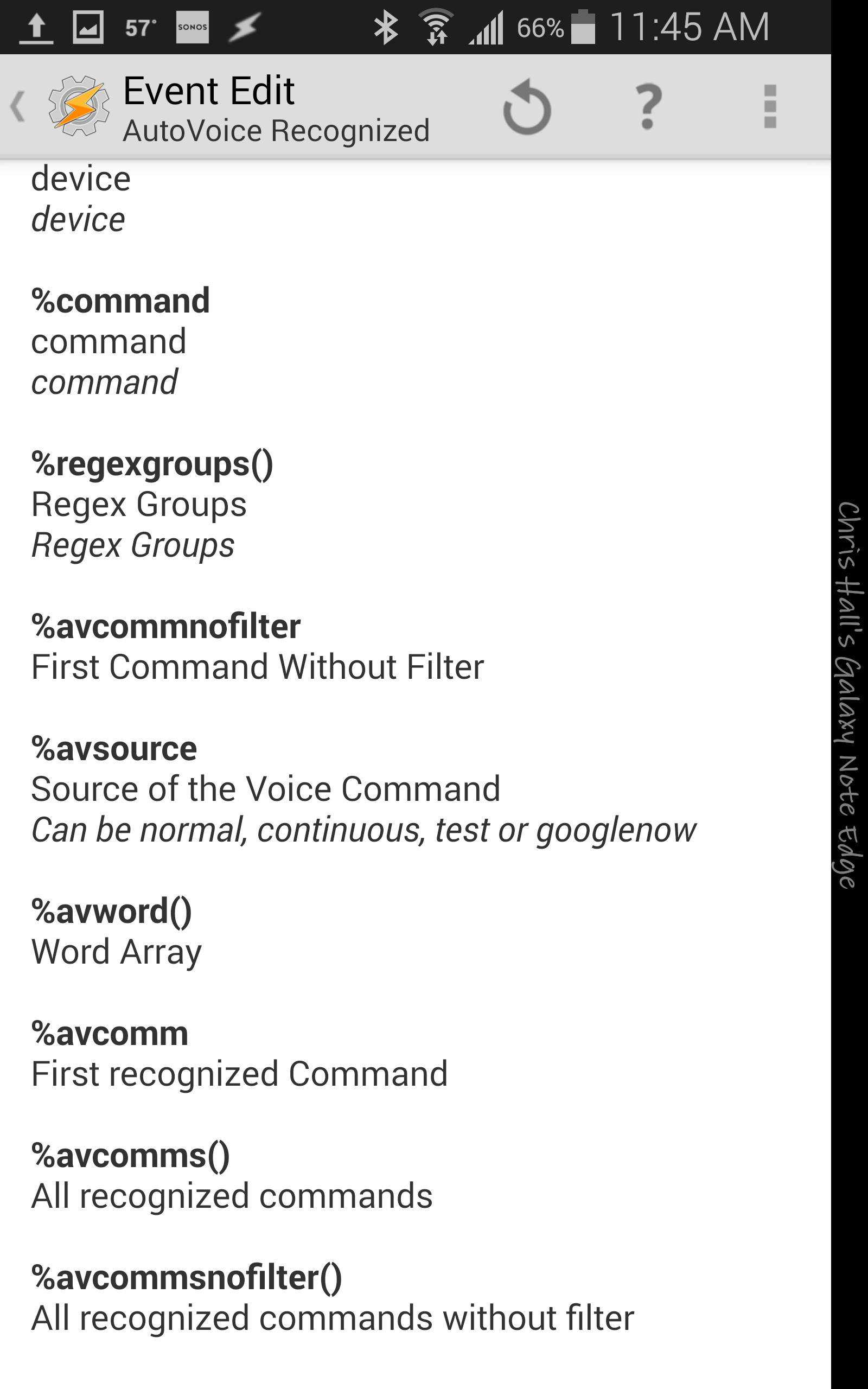 Chris-
I don’t see anything immediately wrong with your screenshots, but I didn’t see any description of the problem you were having either? I put together a really quick video showing me walk through this on my Nexus 9. I go through the steps fairly quickly, so you may want to use the YouTube controls to slow the playback down or pause/rewind as necessary.

One thing to note is that you need to fully back out of Tasker before the profile becomes active - this has bitten me more than once!

For those using the Apple Watch for voice command, just wanted to mention that both the SmartThings official watch widget and the IFTTT Do Button can be brought to the top with voice, then executed with one tap. Way easier than messing with the app selection screen. So:

The watch will then open that widget

If like me you find the physical buttons hard to use, or you have a lot of watch apps, this uses voice to simplify access.

Note also that for IFTTT you have to say “Do Button.” If you just say “Do” it wants to handoff to the phone.

Josh – Thanks for the instructions. Finally got this working. I’m assuming I can add commands to “lock” on “unlock” [door locks" etc., in addition to "turn"ing on various lights?

On a separate note, any thoughts of using microphone module(s) on a room’s ceiling, connected to a dedicated Android device, to pick up a hot phrase in order to deliver voice commands without use of a phone?

Chris, yes, you can use the commands ‘lock’ and ‘unlock’ for door locks.

I haven’t thought much about using a microphone module paired with an Android device, but it seems like an interesting idea. Amazon Echo has a nice microphone array in their device and it would be nice to use a bluetooth version something like that, but I haven’t seen anything reasonably priced on the market.