I’ve read and read. This is so confusing I can’t find any post that actually explains how to do this. It’s spread out all over the place. I’ve been trying to 2 weeks now to get this to work. I bought the Aeon Door Bell put in the custom handler. There is no instruction on how to get it to chime for different doors. I added my .mp3 files and it rotates them for some reason.

All I’m looking for is custom voice messages for each entry. Very simple. Do I need to buy a different speaker? or do something different. Or is there a topic explaining step by step on how to do this?

what do you have going right now that is not working?

There are two different custom device type handlers available for the Aeon doorbell and only one of them can handle voice files. And it’s all a bit fiddly. If you want to continue to work with that device, you certainly can: talk to the people in the following thread and they should be able to help you work through it step-by-step. ( this is a clickable link)

This is a device handler for the Aeon Labs Aoetec Doorbell (ZW056-A). [image]   [image] THINGS YOU NEED TO KNOW If the doorbell button isn’t working, try pressing the up and down volume buttons on the device at the same time. Pressing the Physical Doorbell Button executes the “on()” command, but due to the way the hardware functions, the sound will play before the events are raised in ST. When the device turns on, it automatically plays track 1. Some users have reported the doorbell randomly ringing without the button being pushed, but using a couple of seconds of silence as the first track appears to eliminate that problem. Example of empty sound file: Silence.mp3 The doorbell button doesn’t work if you’re holding it, but it works most of the time if you have it on a hard …

That said, as of late 2018 the easiest way to get this function, and also less expensive, is just to get an Amazon Echo Dot. So if you are still within the return period, You might consider returning the Aeon device and getting an Echo Device instead, unless you need the physical button as well. 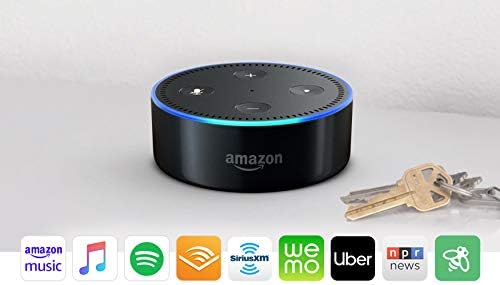 Amazon has their own routines which you set up in the echo app, and they already have the ability to trigger off of a contact sensor that is connected to SmartThings being opened. And they let you create a custom phrase for the echo to say when that contact sensor is opened, by using their routines.

You can even use the “notifications“ feature in the Amazon routine to have multiple echoes say the same thing at the same time.

So it works very well and it costs less than the Aeotec Doorbell and it’s easier to set up.

This will work with any echo device, so if you already have a regular echo or a show you could use that instead of getting a new dot. It’s just that the dot is the least expensive.

And of course you get all of the other echo features as well. But the Aeon has the physical button, too. Choice is good.

How do I setup the Notifications feature so it broadcast to all 3 of my Alexa speakers? It only allows me to select 1 in routines.

BTW… Thanks for the advice I like using the Alexa I’ll send back the Aero Door Bell.

How do I setup the Notifications feature so it broadcast to all 3 of my Alexa speakers? It only allows me to select 1 in routines.

Instead of selecting Alexa speaks in the action, select Messaging, then Send Announcement. It will give the option to select all Echo devices, or any combination of them.

I have to say… That the Alexa voice works perfect! I like I don’t have to make any sound files just type in what I want her to say.