Hello all, first post although I have had SmartThings for about two years now.

I am looking for smart ceiling light fixtures with the following properties:

Does such a thing exist?

See: Smart switch with smart bulb behind it

However, every time I search around the market, the fixtures that are marketed as LED-integrated, are a take-it-or-leave-it proposition with only one shade of white, usually 3000K. There are also a lot of cheap tunable white fixtures on Amazon that are IR or Bluetooth-controlled only, and have poor light quality.

Is there anything out there that might fit the bill?

Philips Hue has some…

The beautiful designed smart luminaires can easily adapt to each situation. Integrate them with the Hue Bridge for even a more enhanced lighting experience.

I’m not sure if they are Smartthings compatible though.

Both Phillips hue and Sylvania have lighting fixtures that work for everything you describe except the wall controller.

I don’t know of a wall controller of that type that can do color temperature. Sunricher makes something close, but it’s for color, Not color temperature, and it’s very difficult to find for individual pieces.

I think most people would just use an inexpensive Wi-Fi phone for this. Then you could use the regular SmartThings app or one of the various customizable dashboard apps. With the customizable apps, you can limit the display to the specific device or devices you want visible.

Regrettably, all Philips Hue products are 80 CRI. Therefore, they are excluded. That is a shame (on Philips) because otherwise they have a full line of fixtures. 90 CRI is not only my personal requirement, it is also a requirement of California’s Building Energy Efficiency Standards, Title 24 Part 6.
https://cltc.ucdavis.edu/publication/2016-title-24-code-changes-residential
https://energycodeace.com/site/custom/public/reference-ace-2016/index.html#!Documents/ja84qualificationrequirements.htm

The problem with a Wi-Fi phone (aka iPod Touch) is that it is overkill for being a glorified light switch, and also lends itself to kids figuring out how to leave the lighting app and play games. It is too complicated, does too much, and does the wrong things.

It also requires constant low-voltage power; I am not aware of a retrofit low-voltage adapter that can fit in a J-box where a switch is supposed to go, that also serves to cut power to the fixture in an emergency.

As far as kids learning how to leave the dashboard app, you can lock it with one of the kiosk or education app overlays. So that shouldn’t be an issue.

As far as cutting power with the WiFi phone, people don’t use them as a replacement for the switch, they use them as an additional control panel. The existing switch should still be in place and meet code.

And While a WiFi phone will definitely have a lot of features you don’t need, you can usually pick one up at Walmart for under $25, which makes them less than pretty much any other control device that has similar lighting control functionality.

With regard to the California code and CRI, check with a local expert, but I’m pretty sure the Hue luminaires are exempt from that particular appendix because of table 150.0-A

The appendix you linked to is primarily used for ceiling recessed downlight luminaires, not flushmount. In addition, the Hues may be exempt because of the “decorative lighting” exemption.

Finally, the initial intent of that code is energy saving, and if you can demonstrate energy saving per foot in the building equal to what the checklists have, usually that will pass. The lower CRI is not going to negatively affect the energy use. But again you would need to consult an expert on that.

It just seems unlikely to me that Phillips would miss a California state mandatory requirement, but it’s always possible. You could certainly contact them and ask.

Perhaps you are right about Philips Hue being exempted.

That being said, 90 CRI is still my personal preference. Philips Hue does not comply, which is a shame given the price point.

I really would like a solution that replaces or at least completely obviates the hard-wired switch. The SYLVANIA Dimming Switch accomplishes this because it goes on top of the hard-wired switch, so nobody can miss it. At the same time, in an emergency, the SYLVANIA product can be popped off to get at the hard-wired switch below. Sadly though, I am not aware of any way to get SmartThings to use that product as a true dimmer; it’s just two glorified buttons that can be pushed or held, effectively making it a “four-button” device. Tunable white basically requires two independent dimmers.

On the Wi-Fi phone solution, what app do you recommend, and with what decorative lighting fixture? The topic is really about decorative fixtures that offer tunable white or RGBWW. You can find quite a large number of tunable fixtures on Amazon…but very few are actually “decorative” and pretty much none offer any kind of whole-home integration path.

We started out talking about color temperature controls. Those are far and few between.

Dimmers, though are much easier to find.

The Sylvania switch that you mentioned can Be used as a dimmer, but only for zigbee bulbs, Only with the classic V2 app, and not with the official integration. See the following FAQ:

FAQ: Sylvania battery-power dimming Switch (model 73743): why there are three different DTHs to choose from

That said, Lutron has a new zigbee dimmer device coming out in a couple of weeks which is much much better looking and more intuitive than the Sylvania device. It also fits right over the top of the existing switch. It’s an official “friends of Hue“ partner so it works with the hue bridge. We don’t know yet whether it will work with SmartThings directly, we have to wait for the release to find out.

If you hadn’t specified color temperature, I would’ve mentioned this one right away. It won’t give you color temperature control, but it definitely gives you a no wiring required dimming switch on the wall which covers the existing switch and looks just like a regular switch.

(It’s very important to understand that while a color control switch might look the same as a dimmer control switch, it is sending completely different commands. This is true whether it is Zigbee or Z wave. So the physical switch itself has to have firmware that will send the right commands if you want to be able to use it for color temperature control.

Alternatively, if you use the “scene” concept instead, then the physical switch can be any design as long as it will send a scene number to the hub. That is what devices which smartThings calls a “button controller” usually do. Then it is up to the hub to have programming which knows what to do with that scene Number.

So maybe Scene 1 is your normal “evening” settings for both brightness and color temperature. Scene 2 is “ movie night” and both dims the lights and makes them cooler. Scene 3 Is “task work” and makes the lights very bright and cooler. And so on. Each scene is a set of presets which could include multiple devices at different levels if desired. And multiple settings for each device.

Scenes work well for many people, and in fact, some people prefer them. They will give you more choices for switch type on the wall. But I understand that you might prefer to individually adjust both color temperature and brightness. Choice is good, it’s just that there aren’t a lot of choices for color temperature control at the present time.

As far as the dashboard app, I personally like actiontiles, which is also probably the most popular.

It has a license fee of about $30 per hub (not per device), but there’s a free trial so you can give it a look.

There are some other competitors as well, and several offered freely by community members. You can find these by going to the quick browse lists in the community – created wiki, looking down towards the bottom of the page for the “project report” section, and then choosing the list for “dashboards.“

There are also threads on that list with discussion of different hardware and mounting options.

If you use the Wi-Fi phone, it’s literally the same as holding a phone in your hand and using the app. It will work with any fixture that smartthings can control.

Also be sure to check out SharpTools.io dashboards which have more features and deeper customization options.

For example, with SharpTools you could have access to quick control of you bulbs / color bulbs alongside helpful information like weather, calendar, news feeds… and even automate those lights!

You can find more details at: 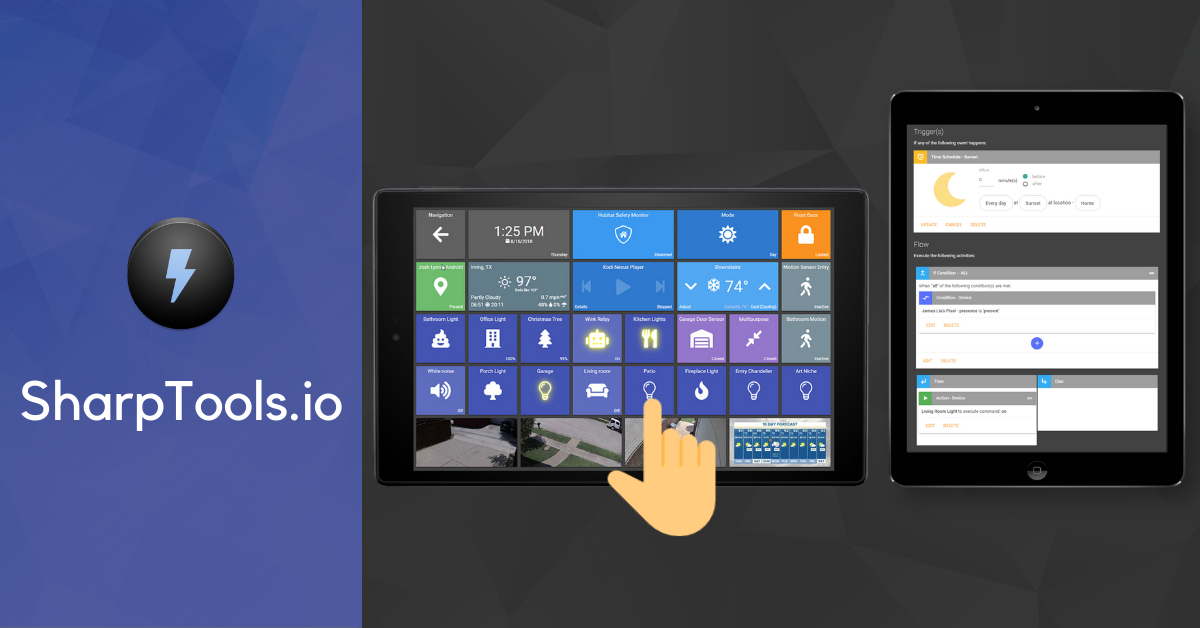 Thanks to both of you.

Well, I want to figure out if there is a “Wi-Fi phone” option that can actually fit in a 1- or 2-gang box. And it turns out, there is! Brilliant replaces any existing light switch to give you touch and voice control over your smart home products — from lights, music, climate, locks, and doorbells to whatever comes next.

The Brilliant Smart Home Control. It looks like they actually made it and it is shipping, since you can order it from Crutchfield. The company bills it as integrating with Lutron, SmartThings, and ecobee, which sounds pretty good to me.

At $299 + $50 per additional gang, the price probably limits some of its market appeal (especially to a lot of DIYers). However, to me it seems like that is not too crazy given the problem to be solved of passing UL requirements and so forth. It’s worth looking into.

You can talk to people who have the brilliant device in the following thread:

Has anyone seen this new product, claims to control SmartThings and Wink, as well as Echo built in. Brilliant Control

It might be kind of hack but could you use two dimmers. One to control brightness as usual and another that controls color via some smart app or webcore setup? Just a thought.

Check out the Home Remote. It takes a bit head scratching but you can set up any arrangement of controls you want and it works well with ST as well as many other smart home systems.

Check out the Home Remote. It takes a bit head scratching but you can set up any arrangement of controls you want and it works well with ST as well as many other smart home systems.

That’s a dashboard app, right? Not a switch itself.

Yes
A good option if one wanted to use a old phone or tablet for a control.