So Samsung owns SmartThings, the Ezon DeadLock looks awesome. What about some integration there?

+1 on pdobrien’s request for a simple (just connect a couple of wires) way to have doorbell chime activations as an input to the SmartThings system.

Smarter: Enable independent detection of activation of each of 2 doorbells (“front” and “back” leads) separately.

It seems like such a sensor should be stupid-simple to create and very reliable if wired into the lead from each button to the “front” and “rear” terminals in the chime. Yet very useful !

Why? I’d like to know if parcel delivery has been attempted when I’m not with earshot of my doorbell chime (out back or running an errand or even out of town), or if anyone else (neighbor, fireman/officer, criminal) tried to see if I’m home. (I’d check a security cam to see who if I’m alerted to the doorbell activation).

It is important it be (1) stupid-simple to connect in, (2) small and attractive (e.g., a sort of dongle outside my chime with small cable into it), and (3) extremely reliable (almost impossible to have false-positives or false-negatives, due to direct wiring, with doorbell voltages 10v to 16v).

FYI - I tried a vibration sensor mounted inside my chime but it usually failed. Seemed like electromagnet triggering the bell killed the sensor, but even before then it was horribly unreliable.

I am not interested in a “hack” that requires I learn how to create an arduino board and custom-program my own app. (I’m slightly more receptive to wiring the water contact sensor of a ST water sensor to the front/rear doorbell terminal leads if that’d work maybe with adding some kind of capacitor or something to the wire to ignore current used to light doorbell button LED.) It seems a major omission that at this point SmartThings still doesn’t have a general-purpose sensor that can be wired into any of many low-voltage sources to detect activations.

Thanks for reading input.

+1 on pdobrien’s request for a simple (just connect a couple of wires) way to have doorbell chime activations as an input to the SmartThings system.

Aeon Labs has literally just this week released their two piece zwave doorbell, a button and a chime. Several community members have ordered it, so the forums should soon know whether it works as expected. If it does, it should meet the doorbell use case nicely.

I’m sure that’ll be perfect for some people, but since that is entirely wireless it doesn’t sound like what I’m looking for. My doorbells and chime already exist, look and sound far better esthetically, and are more reliable (as long as my house has power), so for my needs I just want a simple way to catch their activation signal into my ST system for other purposes and I don’t want to replace them with something less stylish and more complicated that requires technical configuration and maintenance (batteries) just to hear a doorbell ring. Thanks for the heads-up, though.

I’m sure that’ll be perfect for some people, but since that is entirely wireless it doesn’t sound like what I’m looking for. My doorbells and chime already exist, look and sound far better esthetically, and are more reliable (as long as my house has power), so for my needs I just want a simple way to catch their activation signal into my ST system for other purposes and I don’t want to replace them with something less stylish and more complicated that requires technical configuration and maintenance (batteries) just to hear a doorbell ring. Thanks for the heads-up, though.

It’s going to depend in part on the exact wiring of your existing chime.

So as not to hijack the “suggest a device” thread, why don’t we continue this discussion in the doorbell topic?

FAQ: Networked Doorbells as of August 2015 (deprecated--see 2016 FAQ instead) FAQ

FThere are always a lot of questions about the possibility of a networked doorbell. Right now, April 2015, ring is running a lot of television commercials, and that is generating a lot of forum discussion. So here’s a FAQ on what’s currently available. I expect many things will change going forward so this FAQ will have to be either updated or may eventually just get out of date. But for August 2015, it’s current. THE BIG PROBLEM: WEATHER The biggest problem for any doorbell system is the part that outside. Obviously this is less of a problem if you live in an area with temperate climate. But if you live in an area that gets very cold or very hot, many sensors will have difficulty. So just keep that in mind when looking at the options. OPTION 1: PURPOSE BUILT ALL IN ONE UNITS LIKE SKYB…

codytruscott – if you were suggesting that to trigger a z-wave status for a wired door, thank you very much for thinking of that idea but that doesn’t look easy at all. First, it seems to require a power supply from a wall-wart but outlets are rarely available high on a wall at a wall chime, so it would either require an electrician and building permits or a dangling black low-voltage extension cord across the wall, although it might be easier to try to hack something using a 9v battery instead. Then as input it seems to require a DC signal but a doorbell operates on low voltage AC instead, so one would need to hack some way to convert it for the mimo lite. Maybe easy for you, but it doesn’t look easy for me. Thank you, though.

JDRoberts – I think that discussion is about expensive fancy networked doorbell/intercom/cam systems. The topic here is “suggest a device” which seems a better fit for my wishing for something really simple that just picks up a voltage pulse from of an existing wired circuit (low voltage AC doorbell circuit activation in this case, but the idea could be generalized or slightly modified for other purposes).

P.S. – I find that other smart networked doorbell/intercom topic interesting to read, but those just don’t seem ready for prime time yet given the many negative reviews from those who tried them. (I was even an early kickstarter funder of the 1st generation Skybell, but realized it’s performance wasn’t up to reasonable performance yet esp. through my home’s metal siding, so I decided not to waste time installing it.)

There are several doorbell topics. The doorbell FAQ topic I linked to covers a wide range of possible solutions. It does mention the fancy video doorbells, but also links to projects where people have simply wired in a contact sensor or mimolite to an existing chime mechanism. Or used an acceleration sensor, which I know you tried.

Samsung SDS just certified a new zwave plus standalone button for South Korea. Would be awesome to see this on a US frequency that works with SmartThings. 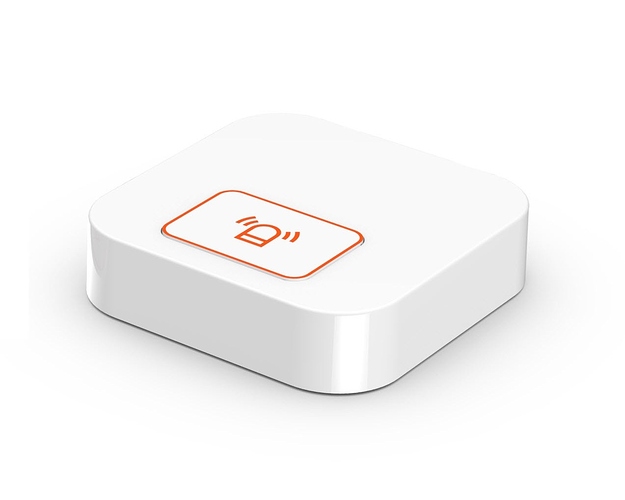 I think the Mimo Can be adapted in a more simple fashion.

First, for power, you can use a battery pack. For instance this one.
http://www.amazon.com/BEME-International-erod-Battery-Power/dp/B00905RV3K

We’ll use this diagram for reference for setting up your chime:
http://www.hrrc-ch.org/images/DOORBELL%20WIRING%20SCHEMATIC.JPG

For the two wires running to the existing button, connect one to the 12V+ on the battery pack, attach the other to the Signal 1 on the Mimo Lite.

The Mimo Lite can be configured to close the dry contact when it receives input from the Signal input. This is all local-to-the-device processing and isn’t dependent upon the zwave network or the smart things network.

With this configuration, you’ll be able to use the button to initiate a chime as expected (even if the network is down), sense a chime and trigger smartthings actions, activate a chime from smartthings.

If anyone has suggested changes to my above suggestion, go for it. =)

I would love to see the Smarter Kettle - the iKettle.
After seeing the kitchen demo where he opens the cupboard for a mug, and the sensor switches the kettle on.
The device pairs on my local wifi network so is this a possibility??

It’s likely possible if there’s an open API, but I’m not sure it’s practical.

If just opening the cupboard turns on the kettle, how do you put dishes away after you wash them without turning on the kettle?

But “your use case is not my use case,” if you like the way it works, you can probably do it if you can get cloud to cloud integration.

Has anyone seen this? Lower your ac cost and tax deeuctible so gov pays for part of the cost http://www.mistbox.com

thanks for your input friend.
I agree with your issues, but would still like it. I could set a delay for 30 minutes on the door, or maybe switch the ‘home’ to ‘brewing’, so if the door opens again, it resets to home. In other words, if I want another mug after ‘brewing’ , I simply have to open the door, close, then open again…

hue is great, but not for main lights… its too damn expensive. I have two blooms on either side of the tv, to add music or movie ambience. The main lights I haven’t done yet, but I hear GE bulbs are cheap and cheerful.

thanks for your input friend.
I agree with your issues, but would still like it. I could set a delay for 30 minutes on the door, or maybe switch the ‘home’ to ‘brewing’, so if the door opens again, it resets to home. In other words, if I want another mug after ‘brewing’ , I simply have to open the door, close, then open again…

The thing is, the brewing step likely takes about 10 minutes. I could more see myself using it the way one reviewer does: I’m watching television or at my desk, tell the kettle to start brewing, it notifies me when the water’s hot, then I go in the kitchen. But everybody’s different.

The I kettle is one of those devices where I really like the features and the engineering, I just personally can’t justify the $300 cost. But I can certainly see people who would love it. (I’m also pretty sure it would be too heavy for me, but
I’m an edge case.)

Any tea drinker will know the experience. You wander into the kitchen to put the kettle on to make tea, wander back to the living-room or office and half an hour later realize you forgot all about it. So the second time you stand there waiting...

Anyway, yeah, write them and see if they have an open API, this would be a cool ST integration.

we’re loving it already. in the uk its 99 pounds, but to be able to wake up with it activated, then set an optional 20mins keep warm. its nice to get downstairs to a ready boiled kettle.

$300 does seem excessive stateside, but it notifies both/ either morning alarm or entry into the house (via wifi).

control over the ittw and audio is the icing on the cake.

What does this have to do with SmartThings? Or are you simply marketing this item?