I can,t get iphones to work on smartthings, only my Samsung android phones

This is a Cadillac of T-Stats… I have 2 that I purchased with my new units up and down stairs. I currently can check in on the house and adjust the temp but I have to use the Nexia app. It does not require me to have the Nexia bridge. Its straight WIFI. I would like to have every thing under 1 app (ST)

I would love to see a ceiling mounted occupancy/vacancy light sensor that uses both PIR and UltraSonic sensors. Presently it is extremely cumbersome to try to rig up a system that will turn on the lights in a given area, but only when they are needed (i.e. not in the middle of the day), when someone enters the room - and turn them off again when they leave. Most of the motion sensors available are intended to mounted on a wall which can lead to less than desirable outcomes when motion is detected through a doorway or in another part of a house with an open floor plan. In addition I haven’t found any that also incorporate a light sensor.

OK, I’ll throw in my 10c worth.
I’m using ST to turn my hot water on and off as required with a load controller.
Since you already have some Leviton devices.
How about a 73A00-3ZB load control. Its basically a switch but there are manufacturer specific commands that allow other helpful things. I can’t get the data out of them and it would be nice to measure current etc.

The load control is great for turning on/off large loads.

how about ecobee3 new thermostat is there any plan in the works for that?

@nucman, see this thread for ecobee3:

Hello, In order to simplify the installation of the My custom Ecobee device for all ecobee users out there, I made some changes to be able to use a similar installation process as the ST stock ecobee device. This is done with a simple SmartApp called “My Ecobee Init” that acts as a Service Manager for the ecobee thermostats at your home. See readme file at https://github.com/yracine/device-type.myecobee for instructions. Here are the main benefits of using My Ecobee Device: Better performance and reliability Support of ecobee3, Smart, and EMS thermostats Support of Farenheits and Celsius Up to date with recent ecobee’s API changes Expose all ecobee API functions to Smartthings such as setClimate Home or Away for smarter automation More UI tiles to show all ecobee information avail…

Someone somewhere had the same idea as I did

The Flash's click-button will integrate across several services as Misfit aims to turn its wearable fitness gadgets into connected lifestyle remotes.

Just curious, how would you use it? It’s a single-button remote, well… two button if you count double press. You could use to switch between two modes I suppose, like “Home” and “Away”. What else? 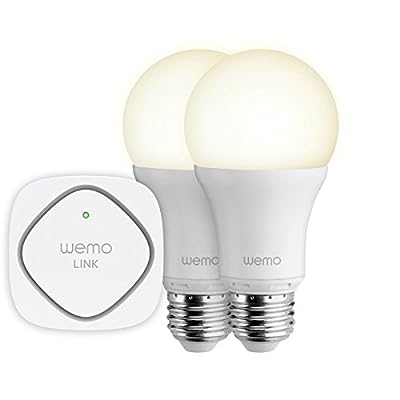 The WeMo LED Lighting Starter Set lets you control, schedule and dim your wireless LED lighting from anywhere. Controlling them individually or as a group is easy and all you'll need is the free WeMo ...

I would bet it’s not stuck to two clicks. If you can use holding the button that’s a third at least. If it could “learn” you might be able to have any number ala morse code

Just curious, how would you use it? It’s a single-button remote, well… two button if you count double press. You could use to switch between two modes I suppose, like “Home” and “Away”. What else?

I’d love to set it to be a Sleep mode. At the end of the day, tap the button to check on your progress as it turns your home into Goodnight mode. Would be nice if it only did that after 9pm etc.

Is there a list of the devices that have been added recently given this thread?

i tested and @Sticks18 programmed the smart pet door

I would like to see.
Orbit Iris Hose Faucet Water Timer
http://www.lowes.com/pd_586530-74985-27087_0__?productId=50140356&Ntt=iris&pl=1&currentURL=%3FNtt%3Diris%26page%3D2&facetInfo=
The timer can join, but something about passing back the date and time. Batteries drain and just keeps adding the same timer.
and
PlantLinks
Was told last year app was done and just needed ST testing.

And keep up the good work with the lab apps. Sonos and Hue’s, both need some love.

These could both be available if ST wanted to make them available but what do you really want to do with them? How would you want to use them? Perhaps there could be a device-type that was each so that the status could be viewed/used as a trigger… The App would head permission to either read or write - but then perhaps you could have a section to “sync” certain items - ?? if that were the case which would they be?

Not long away! It is already tested and working - just waiting to be tested some more before public release.

Have this working also!

It is working for our team but will not work for mass users yet… There are a couple issues with the Oauth and the webHooks that I am sorting out with Automatic and our servers and then it will be ready to go! The delay is due to webHook and Oauth issues.

On that note: What does the user community want to use Automatic for in ST? I am setting it up as a presence sensor - button - and switch for now: presence (home office), sensor for acceleration (running/not), button for ignition, and switch for on/off… This should “present” enough inputs for users’ ? There will also be an accompanying App to configure most of these events to do specific things…

Has anyone attempted integration with the Yamaha Aventage series? The series has ethernet connectivity, a web interface and a smartphone app.

Automatic would be great to use in conjunction with say Sonos. For instance I am driving my car and get inside my designated geofence and it sends a notification through Sonos that Dad is almost home. Nice alert to get the kids to clean up or put away whatever they were doing that they were not supposed to be doing. Naturally a trigger for my nest thermostat but that already exists in the “works with nest” for automatic. Unlocking my august lock and opening up the garage when I arrive in my driveway. To get this to work seamlessly though I think there should be some sort of multiple Geofences if possible. For instance a general fence for Almost home and a smaller one for I am in the driveway. I don’t want my garage opening and closing within a half mile of my house but rather within a few 100 feet but I want the notification to Sonos to occur a little further out from my house.

The Monoprice Z-Wave Electronic Door Lock. It is by far the most affordable of the current options available:

there have been some attempts in the community to get it up and running but it is far from plug and play at this point. It works currently as a general z-wave lock using the ST app but the keypad for user codes does not work: