Struggling with my first automation

I want to do a basic automation - when I arrive at my home, set disarmed status and turn on some lights, but at night only.

First of all, is this an ‘integration’ or a ‘Smart App’ question (for future reference)?

On my phone, I’ve created a new automation ("test’), and set the action to ‘turn on these lights or switches’ … , and set disarmed status, then under ‘additional settings’ I’ve set ‘automatically perform (‘test’)’ when … ‘someone arrives’ - and chosen myself (my phone). At this point, I can also choose ‘and optionally…’ only on certain days of the week’ - but I can’t say ‘only at night’ or ‘only when dark’ or whatever. Back on the ‘perform when…’ screen, I can also choose ‘At a certain time’ or ‘at sunrise or sunset’ … but I presume these are ‘OR’ type operations (in other words, it will run the automation if EITHER I arrive home OR sunset occurs, for example).

I’m a programmer and would be more comfortable with a simple logic editor (if / then, and/or, etc). I see references to IFFTTT but haven’t explored that yet.

Do I need to do create multiple rules for each sub-part of the above elements - one rule just to disarm the system, another rule to turn on lights (conditionally at night), and so on?

I’ve read ‘Custom Automations’ - https://support.smartthings.com/hc/en-us/articles/115002056383 and it says things like ‘tap custom automation’ - but I don’t have a ‘custom automation’ option - clicking ‘add’ just runs a wizard that asks me for a name, then ‘what do you want to happen’ …

So I’m just struggling to get started here …

Try the rules in webcore and you will love that.

For now, all rules/automation questions go in the category under “smart app ideas“ which is legacy language from a couple of years ago, but the mods haven’t quite decided what it should be called now. It’s especially complicated because the two different apps have different rules engines.

Since you have a technical background, you should definitely look into webcore, which is essentially a scripting language for SmartThings. You can do pretty much anything you can imagine with that, including stacked conditionals: it’s very powerful.

Before we can answer your specific question, we need to know which of the two apps you are using: “smart things classic” or “smartthings (Samsung connect)”. They have different functionality.

Meanwhile, you might also find following two FAQs of interest

And here’s the welcome letter for people with a technical background. It’s in the community – created wiki:

Before we can answer your specific question, we need to know which of the two apps you are using: “smart things classic” or “smartthings (Samsung connect)”. They have different functionality.
…

How do I answer that?

? I’m on a Samsung S7 (Android) phone and the App is called simply ‘SmartThings’. Blue circle on white background. I don’t see any ‘about’ type info. My app has 4 main choices / screens at the bottom - Dashboard, My home, automation, and marketplace … if that helps.

Before we can answer your specific question, we need to know which of the two apps you are using: “smart things classic” or “smartthings (Samsung connect)”. They have different functionality.
…

How do I answer that?

? I’m on a Samsung S7 (Android) phone and the App is called simply ‘SmartThings’. Blue circle on white background. I don’t see any ‘about’ type info. My app has 4 main choices / screens at the bottom - Dashboard, My home, automation, and marketplace … if that helps.

That means you have the classic app, which is good, as it has more functionality right now for everything except Samsung televisions and appliances.

I can tell you that you should be able to do this in the routine section. Make one for night for the lights and make another for daytime that does not do the lights and then make sure the time each routine is allowed does not overlap.

For reference, you can also do this with the SharpTools.io Rule Engine which has a nice visual rule builder. Here’s a screenshot showing what I believe you described as a rule: 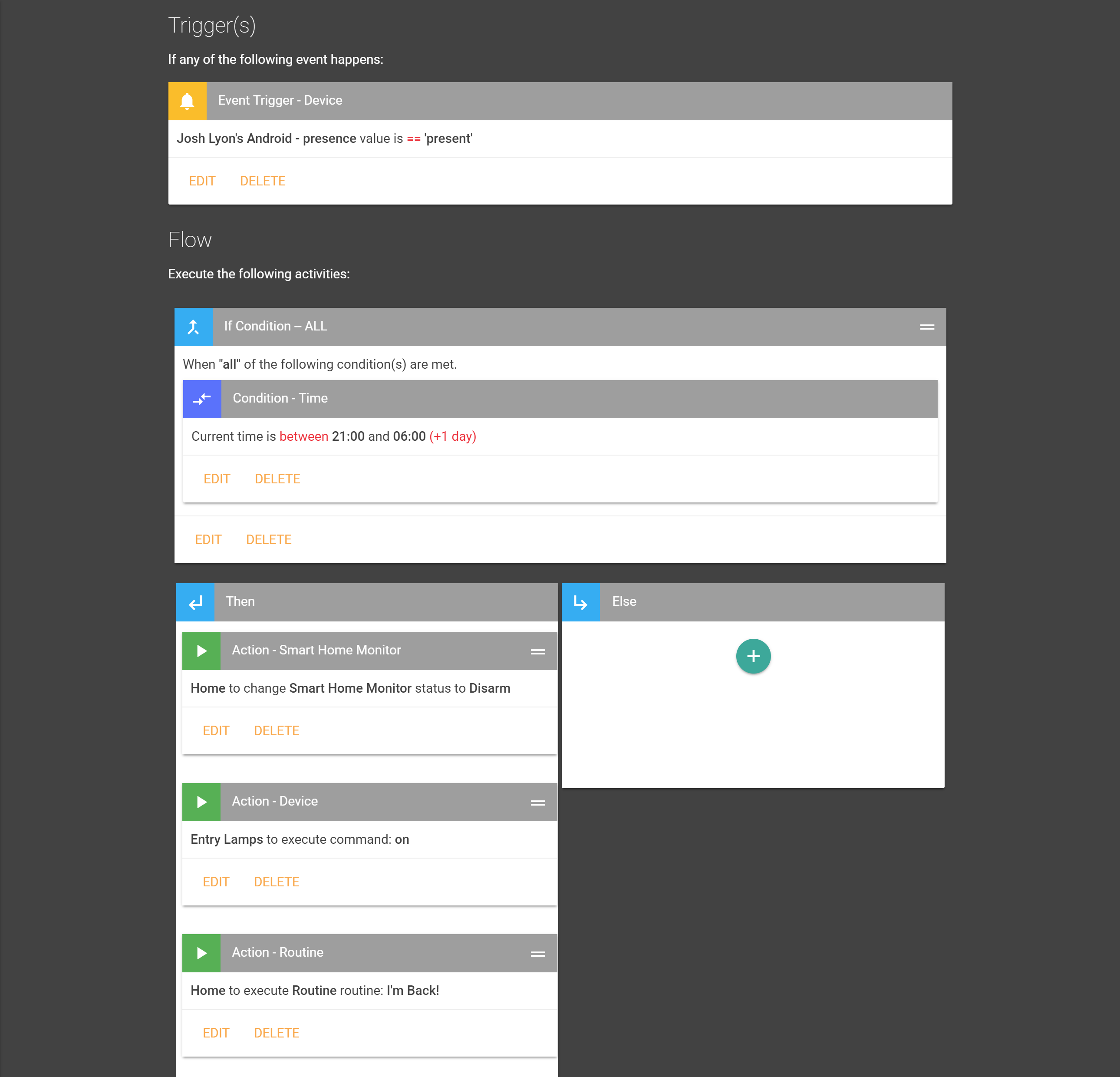