Hi!
I’ve tryed to acess the link but them i cannot find the hub to download… 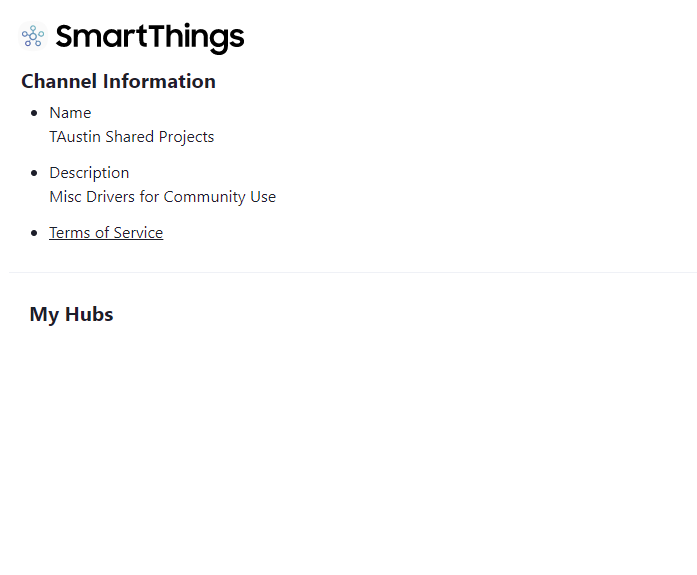 Do you have a hub?

Ok, understand…
I dont have a samsung hub, just a MOES Hub… thats the issue.

Thanks for the great work on this driver.

I don’t know if it’s possible but i could really use a virtual contact that could be set to automatically turn on in a periodic fashion. For example every 15 minutes. It would be nice if it contained a level setting to specify the interval that could be written to programmatically along with a way to stop and start it. This would really help my ability to create a random light on/off show when the house is empty.

I still love the driver even if you can’t do this. It has saved a ton of work converting from WebCore. Thank you!

I would do that with a SharpTools rule, putting whatever you want to occur within a loop that would repeat on whatever interval you specify.

@David_Swope @Mariano_Colmenarejo has a Virtual Appliance driver that you can create random lighting automations with that may be of interest.
Here’s a link to my post with an example of the rule. (The routine does work, I had something else that was disabling it)

Some good solutions already mentioned, but if those don’t meet your needs, let me know. I have a counter utility driver that could potentially be expanded to provide the features you’re looking for.

You can do that with a routine. If device has been off for x minutes then turn device on (then turn device off in x minutes). You can use preconditions to only do this during certain modes or at specific times. I use it to cycle a heater only when the temperature is below a threshold and when in night mode.

Thanks for all the suggestions. I’ll try them out as soon as i get some time.

Hi @TAustin, we live in a wildfire-prone area and in season the air can get ugly fast, and regularly see AQI numbers in the hundreds—and sometimes in excess of 500. I’m trying to improve my monitoring and climate control to adapt to the changing environment and am looking for a virtual AQI device that will work with the higher AQI ranges used in the United States. Any suggestions? Thanks.

I could create what’s called a “custom capability” that would could have a an index with whatever ceiling you want. The question is, how are you setting the virtual device? The current one uses a dimmer control to set the CAQI value, which works out because they both have a range of 0-100. If we have a custom CAQI device, I assume you’ll need some way to set it. Rather than use a dimmer control, I could, for example, just provide a numeric input field. But don’t know if you’d be able to use that in your automation routines. Let me know what you think.

I could create what’s called a “custom capability” that would could have a an index with whatever ceiling you want. The question is, how are you setting the virtual device?

Via the API. And the majority of my automations within SmartThings are rule, not routine-based, which generally gives me more latitude.

What am I doing wrong on the iPad?

I don’t think you are doing anything wrong. This sounds like an app issue. But I’ll try it myself on an iPad when I can.

I can’t proceed, it just stays on this screen.

Were you able to solve your issue on the iPad? I tried it myself, and it works OK for me. Sometimes you just have to exit and reload the app, or give it a lot of time to update before you try anything.

You’re correct, it’s working now. I don’t know, but I cleared the ST app out and forced a reload before I sent the message and it still didn’t work.

Thanks for checking, and thanks for the driver…it’ll help a lot!

Thanks for this driver @TAustin !

I had one virtual switch and six virtual dimmers that I created a couple of years ago using the IDE.

I had no confidence these would be automatically migrated so I used your driver to create replacements. Not one of the more complicated use cases for this but helpful to me!

Thank you for creating this, it’s very helpful!

I have tied an on/off routine to a momentary switch, Alexa discovers them but quickly decides to delete them… it’s not deleting any other type of switch so there’s something about vEdge that it is not liking…

It’s worth noting that the virtual device creator provides a serviceable workaround for a current limitation in the Edge/Lua platform.

There are lots of hardware components that consist of multiple devices. The Zooz ZEN30 is one example, which consists of a dimmer switch and a child relay switch (designed to control ceiling fan/light combos). But the new Edge/Lua platform does not support the separate control of these devices, because the Edge driver cannot create multiple device controllers. The result is that the ST app will only display one device, while the child device is accessed only through the extended/advanced device settings. This limitation means that connected services (e.g. voice control) cannot see the child device and therefore it cannot be controlled.

By creating a virtual switch and connecting it to the hidden, child device via on/off routine, the child device has a separate representation in the ST app and can be controlled accordingly.

In short, @TAustin’s virtual device driver is essential to the new ST platform. Thanks for creating it.