Do you still get these at a discounted price? If so, let me know. Michael(dot)Meeker (at) gmail.

I just ordered some Somfy window blinds that are motorized through batteries. Will the ZRTSI work with this?

Yes, regardless of whether they’re powered from the wall or via battery, any Somfy motor utilizing RTS radios (basically every Somfy motor) can be controlled from the ZRTSI.

I’ve found the same issue where-by all shades report the last event instead of reporting their independent status. It’s annoying.

I created my own device type to get around this issue:

Toggle switches don’t work well without accurate status, so I added discrete Up, Down, and Stop tiles.
I also disabled automatic polling, so the status will always reflect the last button you pressed. 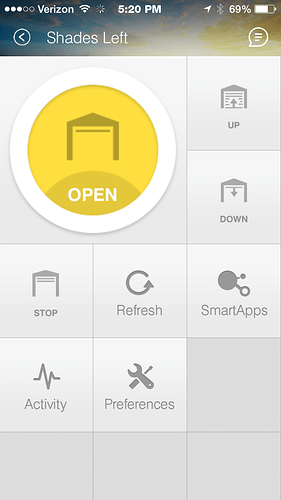 Known Issues:
Pressing a button immediately after another button won’t operate the shade, but it will change the status.
Pressing Refresh will poll the ZRTSI for the current status, which may be inaccurate.
Using your Somfy remote will not update the status.

If any of you have programing experience, please let me know how I can improve this!

I have called two Lowes stores in my area and they can’t even find a Somfy ZRTSI ii listed. Could you tell me which store you called that actually know what they are doing?

My Somfy MyLink hub arrived today! Unfortunately,my blinds aren’t motorized yet as my installer had to order new end caps for them to fit.

When I called Lowes to order the zRSTI ii, they said they would call me back and never did. My local home depot told me I had to order blinds through Bali to get that part with it. I gave up on that…

A quick update on this, and apologies in advance for jumping into this conversation late…

Somfy is now one of our partners as part of our CES announcement; and given this, we will be working with them very closely to integrate their products.

Many of you have asked about limitations and advantages of the different bridges, this is what I know:
Currently the ZRTSII is the best way to connect the somfy to our platform. You’ll need to pair the bridge, and the pair the individual channels (allowing up to 16 channels). This is a little messy right now since we’re treating it as a dimmer. I’m still waiting for my own setup to do some self-testing on this method, but I’ve heard this is possible.
The ZRTSII is the most cost effective since you don’t need to buy individual modules for each blind to control. However there are some drawbacks:

The Zigbee and Zwave Modules does support feedback however, but you’ll need to match the appropriate non-RTS motor and module separately.

The wifi version will likely be integrated much later. The push here is that we want to do a LAN integration with this unit given that our new hub will do local processing. Our goal is for your devices to work when your internet goes down (as much as we can).

My local store is in Amherst, NY. Might as well say Buffalo. Store number 1883. I called back and asked what was displayed with my order. It is listed on their Bali Blind system, under accessories, as “16 channel bridge”.

Thanks! My guess is someone will write an app to integrate the wifi module similar to MyQ before the official one comes out. It is my understanding that the wifi module can control up to 5 channels which can be multiple blinds. In my case, I have 5 blinds in my living room, so if I decided to motorize other blinds, I will need to buy another hub. They are priced cheaper than the ZWave modules at full retail, so I took the chance. I see them on eBay for $180 now. As mentioned, the setup is messy with ZWave as well. My wife will use the remote and ST will be out of sync…

Thanks! I called the same store even though I am in Long Island, NY and for $95 bucks, it’s shipping to my house! Home Depot and Lowes in my local area was useless. Even though I got the Somfy MyLink yesterday, I am disappointed to read in the app store reviews that it doesn’t show state of the blinds. I would imagine they can improve the app over time, but so will ST with the zWave module. If that is the case, for half the price and allowing more blinds expansion in the future, the zWave module might make more sense. I am going to use both and determine which I like better but sounds like the zWave module with ST integration for $95 might be the best bet. My installer is coming next week to install the Somfy motors and I will report back.

Thanks for the info! I called them and have one on the way. Now I’m looking for a video doorbell like SkyBell. Does anyone have any recommendations or good buys?

Did you get any sort of Lowes email confirmation? I didn’t receive any, but I called back and they gave me an order #. However, I don’t think thats the same as the reference # from Bali where you can check the status of your order:

No I never received any order confirmation from Lowes but now that I’m thinking about it, I don’t think the woman on the phone took my email address. All she took was my shipping address and payment info.

Would also be interested in purchasing the Z-wave to RTS (ZRTSII) at your reduced price if you still sell them. Unable to PM (new member I suppose). My email is sdbroyles1@gmail.com.

sending it commands does not feedback to ST

Hey Gilbert, I’m just wondering what your plan is for working around the limitations of ZRTSI? Currently it reports the same status for all 16 channels based on the last event. This makes ST polling one-sixteenth helpful and fifteen-sixteenths crazy making. Can Somfy update their ZRTSI firmware to fix this?

Hey Gilbert, I’m just wondering what your plan is for working around the limitations of ZRTSI? Currently it reports the same status for all 16 channels based on the last event. This makes ST polling one-sixteenth helpful and fifteen-sixteenths crazy making. Can Somfy update their ZRTSI firmware to fix this?

Since the ZRTSI doesn’t actually have a two way communication (reporting back states or closure levels), this would be dependent on the device type that we write for it.
We’ll be working with them directly for better ZRTSI support. We haven’t started actual development yet so it’ll be a few months out.

Bad news folks. Lowes called me to tell me the zRTSI module is back ordered to May!!! Guess I will use the MyLink for now. I won’t be able to return it in May, but can always resell on Ebay.

I have a brand new ZRTSII module that I’d be happy to sell for $75 (the price I paid) + shipping. I ordered one for each of my rooms and it turns out I didn’t need that many. PM me if you’re interested.

[UPDATE] Lots of PM’s, but only one unit. It’s taken now.