Hello all,
I am drowning in the sea of information trying to understand IoT home automation and smartthings. I bought a few wyze devices and immediately realized they rely on internet to work for automated functions. For instance my first need is to control other switches and outlets in a room all triggered from one of the switches. What I am trying to understand is if I get a smartthings hub and some of these cheap devices that say smartthings compatible will I be able to connect them directly to the smarthings hub in a way that will work locally so that they are fast and don’t need an internet connection to function?

Here are the devices I was considering to purchase, would they work locally together.

Thanks for reading and sorry this question is so generic. I am struggling to figure this out.

In the case of SmartThings, “local” control just means that the drivers and automations run on the hub itself. Unfortunately app and voice control still requires internet connectivity.

Local control would mainly have to be Zigbee or Zwave devices, I don’t believe many wifi devices are local. The ones you posted are unlikely to work without internet.

For example, this means that pushing a switch in the app or via Alexa requires an internet connection. However, an automation rule that triggers other switches based on a physical switch, would run without internet connectivity, as long as it is Zigbee, Zwave or has a driver that provides LAN control (rare).

Treatlife and meross use cloud-to-cloud connections. So they do not require a smartthings hub but do require the internet.

I just wrote a detailed post on this topic in another thread, which I’ll link to in a minute, but the short answer is no. SmartThings is still largely a cloud based system.

If you want simple, easy to use local operation look at Ikea Dirigera, Apple HomeKit, or Aqara. (Although each currently offers a different selection of candidate devices.)

If you have a strong technical background you can also look at Hubitat, Homeseer, and Home Assistant. These also run mostly local but are much more complicated to set up than the ones in the previous paragraph.

And if you can wait a few months to start purchasing devices until Matter compatible devices are available, you should get even more choices.

Just as an example, currently the exact same inexpensive Meross smart plug that works locally with Apple HomeKit will require the internet to communicate with SmartThings. It’s just the way SmartThings is designed.

Thank you for the replies! This is what I was suspicious of. I had come to the conclusion that zwave and zigbee could work locally but they are so expensive compared to these wifi devices and not worth it to me. I’ll rewire my house before I pay that just to trigger other switches and outlets from a single switch. I had read that smartthings has local functionality and saw that these cheap wifi devices advertised smartthings but I think what they mean is that they can be bridged to smartthings via cloud/internet and that they wouldn’t have the local functionality like you all said.

@JDRoberts: I do have a technical background so I will look into those options you listed. I actually have some homeseer stuff a friend gave me a long time ago that I never touched. Could be enough to at least try it out. You mentioned Apple HomeKit works with those Meroos outlets which I haven’t looked into at all. I’m seeing that an apple tv 4 can work as a hub for setting up automations. I looked back at the Meross smart plug and it is not clear if it works with apple homekit from the ad. Maybe I’ll just have to give it a try.

I heard about Matter but still don’t know exactly what it is or if it is worth waiting for.

I just looked back at the ad and saw there was another option for the outlet that advertises apple home kit for slightly more cost.

I just looked back at the ad and saw there was another option for the outlet that advertises apple home kit for slightly more cost.

Exactly, Meross has two different model lines. The ones that work with HomeKit are a few dollars more, but still quite inexpensive. I use these in my own home. They have excellent safety certifications (ETL on most models, not just CE) and the US models can handle 15 A, not just 10 A. They’ve worked well for me.

I heard about Matter but still don’t know exactly what it is or if it is worth waiting for.

Matter is a new compatibility standard, which most of the big home automation players are involved with, although maybe only for some models.

Amazon basically brought everybody together and said you’re driving our customers crazy, because they don’t know if the products they see in the online store will work with what they already have.

So Google, Apple, Samsung, and Philips Hue, and a bunch of other companies, including IKEA and home, assistant, agreed that they would come up with a new standard for IP address-based devices (which right now and practice means Wi-Fi or thread) so that any device that was matter-compatible could work with any of the major voice assistants. Apple contributed the bridging and Wi-Fi security architecture, Zigbee contributed a bunch of other messaging architecture, and amazingly, three years later, there’s an actual standard and devices are starting to be certified.

The biggest advantage will be that you’ll be able to use more inexpensive Wi-Fi devices with more platforms without having to figure out each time how to make the integration work.

How important that will be varies: people with stronger technical backgrounds, may not need it. It’s more about the mass market consumer who right now can’t figure out whether the sensor they are looking at will work with the Wi-Fi switch They are looking at.

The Matter Smart Home Standard Is Finally Available: Here's What It Means for...

Here’s the discussion thread in this forum:

Do you have an inexpensive switch that works with homekit? I can’t seem to find one.

Do you have an inexpensive switch that works with homekit? I can’t seem to find one.

A wall switch? I don’t use cheap devices for things that will be wired to the mains. I’m Quadriparetic and use a wheelchair, so I’m more concerned about fire safety than a lot of people are.

I use Lutron Caseta switches, which work with both smartthings, and HomeKit. I really like them, but they aren’t inexpensive.

All of that said, Meross does make wall switches which are ETL certified, and work with Homekit. 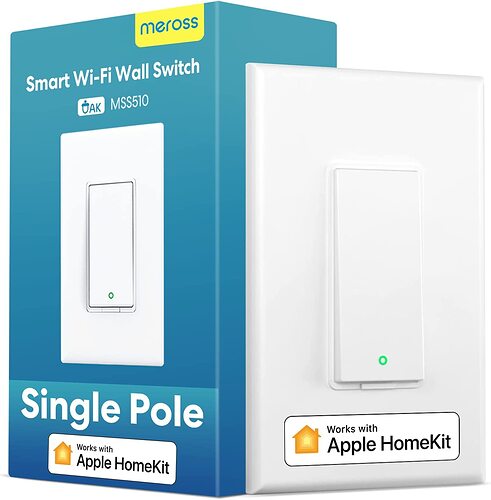 Of course, both of those are only for North America. If you are in a different geographic region, let us know, as the device selection does vary.

And again, once matter devices are available, it’s very likely that there will be quite a few more that work with the Apple Home app.