SmartThings Is Over Party

Yeah, corny, I know, but it’s become blatantly obvious that neither smartthings nor samsung care about actually delivering on their promises and ETAs. They don’t give us updates, and when they do, those updates turn out to be false. Well, I know I for one am just sick of it. It’s time to put our word out. By ourselves, obviously no one cares what we have to say, but if we all speak with a loud voice, I’m sure that we’ll at least be heard. And that’s at least a starting point.

I’ve started the tweet. Please retweet, copy/paste, keep it going. Every retweet sends a notification to both smartthings and samsung to get the ball rolling. We can’t just sit here in silence anymore.

What is the exact problem you faced?

I think it’s pretty clear that the entire community is upset about the fact that smartthings and samsung constantly put out updates and ETAs that they never meet. For example, we’ve been waiting for over a year and a half for a migration tool between hubv1 and hubv2, and nearly the same amount of time for an app for the GearS2 watch. That’s just two examples, and there are countless more. I just think it’s high time for us as a community to come together and tell smartthings and samsung with a resounding voice that we’re tired of the BS. That is all.

Too bad you’re throwing the party now when

devices, schedules, and SmartApps are operating better than ever.

If they can fix the droppig zigbee devices next, I’d really be a happy camper… 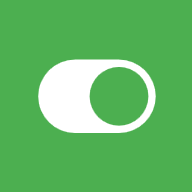 Good luck with that. It is what it is, and you’re either ok with it or you’re not. I think ST has stopped all the promising, and are working on the basics.

Your other topic is about the lack of migration tool. It’s true that ST lacks a needed tool for that, but you did admit to not doing your own research before buying V2. There are lots of topics about lack of migration that you did not read before buying. Samsung is pretty much not involved so your issue is with ST. Samsung bought ST as a platform for a business venture to make them money. They didn’t buy it to take over.

If you don’t get what you want with your protest, where will you go? Revolve? Oh wait, Google bought that brand and they shut it down. What’s left? Vera? Wink?

Well… it’s at another price point, but a bare bones Mac running Indigo is an excellent local alternative. No ZigBee support, but most of my stuff runs on it in my setup, with SmartThings doing the cloud based stuff, and communicating with Indigo via HAM Bridge.

While I have zero experience with Vera, I can be fairly certain that any Wink/St migration is very strongly in STs favor .
ST’s biggest asset is also one of it’s greatest weaknesses. The open platform and ability to interact with almost any other device either directly or through community designed apps and DTHs.
When I had Wink, I had maybe 20 devices, light bulbs, locks and a couple OC and motion sensors. Then on to Securifi and working directly with their engineers was able to add about a dozen more devices over the course of a year. A year with ST and I am at over 150 devices.

Every system has pluses and minuses. There are a lot of alternatives out there, and different ones will work for different people.

Not that I WANT to leave ST as I love the fact that we have access to the IDE and some seriously advanced features; but the reliability of the system and inconsistent nature of it (works one day, doesn’t the next, etc.) is just too much… especially since I have it implemented at my house to use fully, not just as a toy/hobby. Since Wink is dead or dying out; is there anything else out there that is comparable to ST but actually works? I know this is probably not the best place to post something like this however I love what ST in theory should do… just tired of waiting endlessly for what seems to be a one man support show to fix. It’s sad that Samsung doesn’t fund their dev/support better because it’s clearly VERY lacking and I’m sure that poor guy or poor guys are just completely swamp…

I came from Vera so I am not so sure that is going to be an option. It seems like every platform is some issues and people that are tired of dealing with them. I just wanted something that Google home would communicate with. So far I am having fun. BTW Vera lite was working but instead of upgrading I decided to make a change.

It’s become very clear to me in the past few days that the community still loves smart things, but not because it’s an amazing company, but because we’re stuck here and the only other choices are inferior. This certainly doesn’t make me feel any better about ST at all. I’m extremely pissed off as are a lot of people and not over any one thing. I don’t think anyone could rightfully disagree that ST has let us down too many times and the ONLY reason we haven’t left is because there’s not a better alternative.

Curse the day that ST runs itself into the ground, which it will do if it continues along this path, because you and I, we’ll be left in the dust.

As for me, there may be no better option out there, so I’ll find a solution and hopefully i can share it with others, even i have to somehow build it myself. I’m done with ST, there’s absolutely no excuse for their behavior.

I think the openness of the whole system and the (relatively) low price point are the reasons why people just stick around. Even with the problems, you have a “good enough” system that works sort-of well most of the time, and it doesn’t cost you $1k per room like some of the professional alternatives.

After getting abandoned in the TCP boat, I can certainly say that having a system that’s relatively inexpensive but that can communicate with other things is a good choice. Worst thing that can happen is that ST goes down the tubes and you end up having to use the Hue app for this and the Ecobee app for that and the such-and-such app for something else, but it’s certainly a better option than going with a closed ecosystem that doesn’t give you any option when the vendor decides to pull up stakes.

After getting abandoned in the TCP boat,

I too started out with TCP Connected. While I have since replaced all TCP bulbs with Hue, I am fortunate ( I think ) enough to have a couple of the TCP remotes. AFAIK they can still work locally. So I am still debating gifting the whole setup to my parents. They can each have a remote and I can stop listening to my mother complain ( wishful thinking ) that my dad left a light on, she had to get up and shut it off.

not because it’s an amazing company, but because we’re stuck here and the only other choices are inferior.

I think you are right on here. Most of the staff are pretty good too. I just feels like a failure of leadership. There is no excuse.

Just search the #notsosmartthings hastag on twitter. Lots of complaints there. Fact is, posting on here doesn’t get much visibility, posting to social media apparently does.

I don’t need Bluetooth, migration tools… Etc. I wanted them to work on reliability. As long as my time based and better local processing are getting better then they are forgiven for false promises. The people that made those promises are no longer here anyway. Alex, Ben?

The people that made those promises are no longer here anyway

Some people that made those promises are still here and still believe in their dream. That’s why progress is being made! 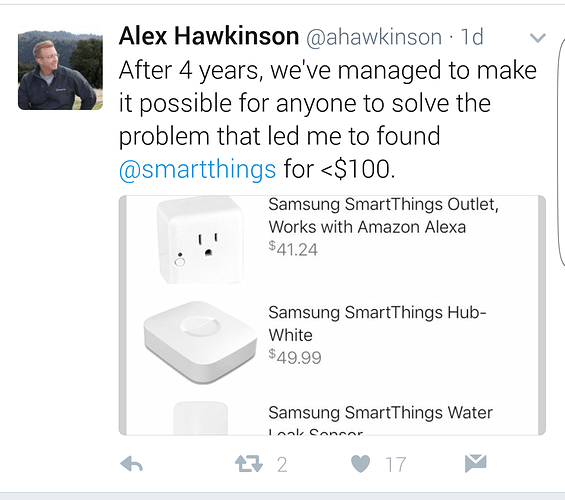 Have they added cellular messaging?

Your experience with smart things?

And the CEO / Founder Alex Hawkinson has subsequent admitted that SmartThings would not have prevented this damage (and still can't?) because the internet connection was also out and thus this cloud dependent solution doesn't even address the inspirational use case.

The proposed solution is a hub plus a leak sensor plus a smartplug. How is the smartplug going to fix a burst pipe problem?

So, what is the smartplug supposed to do when the power is out?

Here’s how @Alex described the original incident in 2014:

Alex Hawkinson just wanted to give his house a voice. In February 2011 Hawkinson, an executive at technology startup ReachLocal RLOC +%, headed up with his family to their remote cabin in the Colorado Rockies only to find it soaked from the inside. Several months earlier the power had gone out and a pipe had burst. Moisture had made its way into every crevice. Fixing the place ended up costing more than $100,000.

“It struck me: I couldn’t believe the house didn’t have a voice,” says Hawkinson, 41, a midwestern-raised serial entrepreneur. “I have a handyman who lives half a mile down the road. He could have shut the water off, and we would have had no issue.”

So what is the smartplug going to do when there’s no power and there’s no way for the hub to send a notification?