Well…it’s been a struggle LOL! I just installed two IP Cameras (still can’t get them to connect to sighthound >_> ) but anyways, that meant I didn’t need my motion detector anymore since my cameras did that. SO, I have a problem with my house and figured I’d try and throw some mud up against the wall and see what sticks. See, our door doesn’t have a door bell. And people in America just don’t know how to knock (they tap, they don’t knock, and it’s ridiculously annoying). SO, I generally would miss important packages and wouldn’t know when someone was visiting. SO, I took to making my motion sensor my door bell, to automatically detect someone’s presense and, through eventghost, ring a door bell for me.

My first challenge was figuring out whether I could just stick it on a window or would have to take it outside. Well, it didn’t work on a window (go figure), but I wrapped it in a zip-lock plastic bag and pulled the plastic tight, it works perfectly!! So I placed it outside and viola! I’ve got a working door bell!!!

So I moved it around and placed it in different locations, but nothing seemed to work, it just read too much information. So, I’m asking for a solution. Does anyone know how I can make its range a little narrower? Like, only detect one area but not others, maybe block its view? I have no idea, someone let me know what you think.

I originally went the motion detector route myself, but as you have noticed it can be like using a sledgehammer to do surgery, kinda messy. Ive had a lot of luck with using wiring up a pressure sensor to the leads of a contact sensor. I have 1 under my front door mat to turn the light on for visitors, and another under my mattress in my bed to turn off devices while i’m sleeping. If you really want to keep the motion detector you have on your front patio, glass will help narrow the view. Also the Enerwave ZWN-BPC comes with stickers to narrow the detection field. IDK if any ol sticker will do, but i do know the ones that came with it do a great job.

I don’t think any of the official smartthings contact sensors have the headers needed to connect a pressure sensor to it, but this is a write up i did a while back for a “smart chair” that goes into plenty of detail.

Honestly any zwave contact sensor with contact headers for preexisting wiring will work, but i used the Fibaro Z-Wave Door/Window Sensor cause they come in a bunch of colors along with the Ideal Security SK630 Pressure Mat Alarm with Chime mat, its thin and relatively inexpensive. The Everspring Z-Wave Door/Window Sensor and the Ecolink door sensors should also work. I’m sure there are others but those are the ones i know have the headers. When i do this for my sofa cushions so my butt can turn on my entertainment system i’ll probably use the Everspring or Ecolink cause they are cheaper and won’t be seen. [image]

I figured it out. I just laid the sensor pointing up, so the only motion it’ll detect is the radius around the door and not straight out to the street.

My current house also did not have a doorbell. I made a Z-wave doorbell button with an ecolink contact sensor. The contact sensor has a terminal block that allows you to wire up any kind of button you want. I used a dremel to make the hole for the button. It operates as a simple z-wave button to trigger sounds on vlc/sonos, send pushbullet notifications, etc. 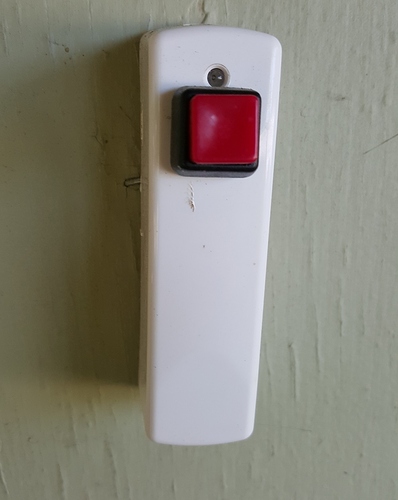 You can partially mask PIR lense with electric tape. That doesn’t cure false alarms. I think a good solution is requiring 2 PIR motion sensors seperated by some small distance looking at the same target area in front of door. Then you need some logic to require both to report motion before announcing a doorbell.

I heard that someone has already hacked the amazon button device that allows you to press a button and re-order whatever it was you wanted to order and you can make it do what you want. Do you think we can figure out how to make this maybe use the Maker channel in IFTTT to make a push-doorbell?

Check this hackster project out. For a little bit more than the amazon button you can have this. The Amazon Dash button, it’s all the buzz lately. Regardless whether you think it is the greatest invention or just a passing fad, it is a nice little IoT device. There is already work underw…

It may be cheaper to build, but it won’t be cheap to run. Wi-Fi eats batteries. The Arlo Wi-Fi cameras for example typically need new batteries every two or three weeks.

That may be fine for you, it depends on the use case, but there’s a reason why there are very few battery operated Wi-Fi devices now.

As we discussed in the dash topic, you pay seven times more for the BLE flic button then you do for the WiFi Dash button, but it’s likely you will get 60 times more battery life out of the Flic, plus it’s very hard to change the batteries in the dash.

Amazon marketed the Dash button as a replenishment gadget, so it’s likely that people would only be using it once or twice a month. That would give it about a two-year battery life. But if you’re using it as a doorbell or switch where it gets activated multiple times a day, it’s going to die fast.

If you just want to play around with it for fun, go for it. But if you’re looking for practical, reliable home automation switches and buttons, battery-operated Wi-Fi is unlikely to meet the need.