SMART OUTLET: How to keep light button always on?

Hey guys, i purchased some smart outlets by Teckin and they work great. But one issue I’m having is how I can enable them to turn on my ring lights.

The issue is that the ring lights have a separate button to turn them on/off in addition to just being plugged in.

Now the smart outlet can turn them off no problem, but it won’t be able to turn them on as I would still have to push the on switch.

Does anybody know a way where I can have the switch adjusted or manipulated so that it is constantly on? Any other recommendations are appreciated. Thanks.

I’m not super duper sure what the ring lights look like, or if they’re the outdoor ones or what, but I’ve personally been toying with the idea of a switchbot button pusher to manage things like that.

Wow that’s actually pretty neat, didn’t know something like that existed. I’m wondering how much pressure that has to push a button. See attached photo for the ring light switch. It’s definitely a lot more pressure then a regular light switch. 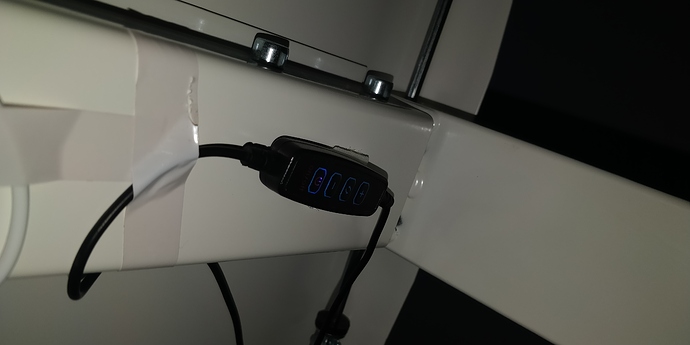 I only discovered its existence about a year or so ago! After I chose devices that didn’t have any buttons to be pushed… I don’t need one for my bread machine right? Right??

I’m not sure how much pressure it exerts, but I linked the amazon one specifically for the reviews and Q&A section. I wouldn’t be surprised if someone has either asked or had a similar button to that set of buttons that they used it on!

They’re also decently active on FB. I backed a Kickstarter project of theirs and they’ve got a group for their products. I feel like they’ve got an active enough presence that I’d feel confident about reaching out to them and getting a response!

I’ve been thinking about getting one for my CPAP. “Alexa, turn on fighter pilot mask!”

Wow that’s actually pretty neat, didn’t know something like that existed. I’m wondering how much pressure that has to push a button. See attached photo for the ring light switch. It’s definitely a lot more pressure then a regular light switch.

I reviewed the SwitchBot for this forum last year. I’m quadriparetic, So devices like this can be of great use to me.

It’s rated at 1 kg of force, but I have found them pretty consistently to be closer to 0.8. That would typically be enough to push most buttons, but not all.

And here’s the community how to article on how to measure force required. However, it does require a special tool which you might not want to purchase for a one off.