I’m not sure this is a valid scenario, but if there are a decent amount of SmartThings users that aren’t on the Facebook group or this forum, there could be a lot of hubs that will be ruined without a way to backup and restore to a new one. Which means those users go to a new platform.

I’m not on facebook, I had no idea until I saw this thread and then searched the forum. Mine were badly leaking too. Smartthings really should have made an announcement here or contacted users by email of this potential problem.

Checked mine and they leaked too. Thanks for the heads up. Same brand of batteries

I am so glad you and others commented on this. This is crazy!

I had to clean my cover too, due to the leaking/corrosion on the cover of the compartment. Its drying off right now. I have 2 over powered battery backups running my media center, so I may just leave these out. High risk…

What in the world is causing all of these leaking batteries. Are the batteries which were included bad, or is it the hub itself? How can a device cause its batteries to leak?

As someone who uses a Lumia 950XL as my main phone, and used a Surface Pro 2 for years (only now replacing it with a no-name Chinese tablet also running Windows 10), I have to laugh when people say things like this. Just because computers are now on W10 doesn’t mean the majority of people are using the Store. And even developers who do have UWP apps are frequently deciding that it’s not worth the time to release for phone, let alone someone who would have to start from scratch.

But even if the Windows Store was heavily used by people, how many people want to control home automation from their desktop? Or on their Xbox? Or from VR? Sure, there’s Cortana, but you know a lot more people are using Amazon Echo / Alexa.

Even though SmartThings is owned by Samsung, it always has sounded like they’re still a pretty small team with relatively constrained resources… maybe a bit larger than before the purchase, but I doubt Samsung gave them a blank check. With that being the case, there are far more efficient ways to achieve some of their goals, and there are more important things to be focusing on. Or have you forgotten how much we all were desperately begging them to spend more time focusing on stability instead of reach only a year ago?

(That being said while I understand the decisions, like I said before… I still wish the WP app would keep me logged in instead of having to re-sign in every time

How can a device cause its batteries to leak?

Top result in Google for "why do batteries leak" says the following: Source: […] All batteries will slowly gradually self-discharge over time. This will occur whether they are setting on the shelf (a much slower process) or installed in a device (which often occurs much quicker) – and dead batteries will eventually leak. Very high temperatures can also cause batteries to rupture and leak (e.g. in hot car during the summer). The “alkaline” of the battery is potassium hydroxide […], and this will leak out, forming a white “fluff” of potassium carbonate, typically on the negative end of the battery cell[…]. Why do batteries leak? A reason for battery leaks (e.g. alkaline batteries, AA, etc…) is that as batteries discharge — the chemistry of the battery changes and som…

In this case, it appears that at least some of the V2 hubs may be draining the batteries much quicker than you would expect, which then would lead to this dead battery problem because people wouldn’t realize the batteries had gone dead and would leave them in the hub, that’s leading to the leaking problem.

edited to update: originally I thought both issues had already been discussed in this thread, but they were discussed in the other batteries thread. My bad.

And even developers who do have UWP apps are frequently deciding that it’s not worth the time to release for phone, let alone someone who would have to start from scratch.

With respect you do understand what UWP apps are right? It is the common app platform available on every device that runs Windows 10. So developers don’t need to determine any longer if it’s worth to release for the phone like you are stating. When a developer releases a UWP app it runs on any Windows 10 device automatically including the phone.

FYI: How are you liking your 950XL? Mine was acting a little finiky with the mobile app. I use a Windows 10 tablet as the home interface with SmartTiles which I found more convenient then having to pull out a phone and load the app, etc.

I just purchased my hub over the holidays. Mine were not Rayovac batteries. I didn’t read the manual but I am curious if lithium AA batteries can be used? Either way, may have been a bad batch of batteries from Rayovac? 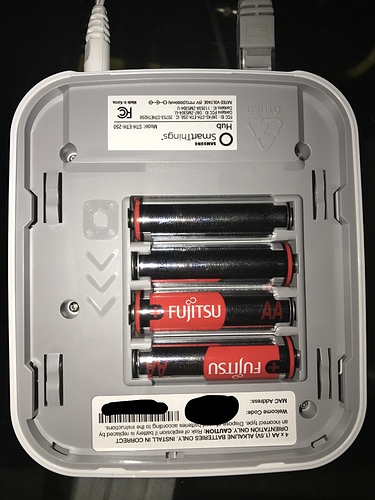 Is ST following this battery issue? An announcement should be made to at least check your batteries!

I fully agree. I just checked mine after reading this form and found they were starting to corrode also. I purchased my V2 hub In November 2016. 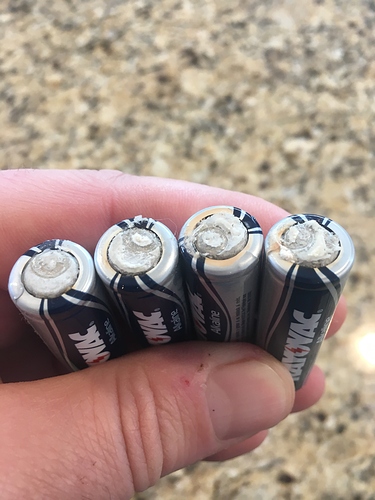 I last checked by batteries about a month ago, they were perfect.
I checked a week ago and found they were leaking.

It’s interesting that many others are experiencing this also! I did not realise that this is a known issue!

I purchased my hub in Dec 2015 and had the original Rayovac batteries still in mine.

Rayovac here and that’s what mine looked like. Glad I saw this thread. I’m just leaving mine out now, not sure what good the backup does anyway with very little local execution options.

My ST is running along with the PI and the router and the nas and the security system and the (why am I listing them all?!) off of a 1500VA UPS so it has no batteries in it. The UPS can run everything for about two hours when power is out…

Rayovac here. Just checked. Horribly corroded. Took a while to clean off cover (no permanent damage thankfully) and even longer to clean the terminals. I put Duracells back in but hope this doesn’t happen with all batteries.

@slagle I have a feeling you can’t say but I am curious if the announcement is due to a newer version hub launching?

recently stated that there was no v3 in sight…

Thanks for the response!

For those of us who don’t stare at code for a living and/or understand Groovy, v3 should be for the stupid people, like myself.

I just pulled 4 leaking rayovac batteries from my v2 hub as well. I’ve had it since the v2 hub launched.

I did the same thing just now from my 14 month-old V2. It’s a good thing I read this thread.

No leaky batteries, but then again I took them out when I first got the hub and had to do a reset in the first month. Didn’t put them back in as if I lose power to my hub, I also lose internet so I do not see the point. Not sure what make they were though.