Quick question to see if anyone here has setup Philips Hue with some sort of smart relay as well. I really love the Hue bulbs both the coloured ones and the new much cheaper white ones as at £15 they almost rival some “dumb” bulbs.

Clearly the Hue bulbs can’t be dimmed by a dimming relay so would want to go careful there, but was thinking I could have all the benefits of the Hue bulbs combined with the convenience of smart relays.

For me the fact the Hue’s can’t be turned on and off if they are off at the switch is a deal breaker at least to put them anywhere other than lamps but with the correct logic a combo could work or do people think it’s over complicated to have two smart devices per light?

Has anyone else done this? 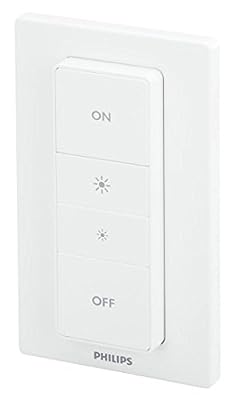 Change the way you control light at home with the Philips hue dimmer switch with remote. Quickly dim or brighten up to 10 of your room lights for games, parties, and movies from the comfort of your co ...

And please divide that price by 100.

Thanks for the link I’ve actually ordered one of those but I think it still won’t stop the inevitable situation that the lights get turned off by the switch. Sometimes its more inconvenient to use your phone to switch the lights off when there’s already a handy switch on the wall for it. i.e. on the way to bed. Then in the morning if you have a motion routine to turn them on or an alarm to wake you they don’t work because they have no power.

I think this switch will help somewhat but still won’t fix the problem, hence looking at combining relays and philips hue. Do you have the hue bulbs? Do you find this annoying as well or have you trained yourself better?

IF relay off, THEN relay on AND Hue ON.

Although I already foresee a problem in that the Hue bulbs reset to 100% brightness so if you routine set them to 20% it would send a signal to the relay to turn on if not on which would set the brightness to 100% then tell the Hue to dim down to 20%.

You can definitely combine a relay and wall switch with a smart Bulb, but you usually want the smart bulb on a different circuit because ordinarily the relay will cut all power to the bulb. So you have the same problem with SmartSwitch or a dumb switch.

In the United States, it is legal in some jurisdictions, but not all, to have a loop at the switch so that the bulb always draws power. The switch communicates to the hub which then communicates to the bulb and tells it to turn on or off. I don’t know if that’s legal in the UK or not. That said it does solve the problem because you can turn the light off with the switch and the bulb goes off, but the bulb is still actually drawing power so it can hear the next on command.

The battery powered switch option really is the simplest. You can put it next to the regular switch, or in a completely different place in the room.

Many people put a childproof lock over the regular switch as a reminder to others to not use it except in an emergency. These are widely available and generally inexpensive. They often come in different styles. In some cases you replace the whole switch cover with one that has a built-in lock and in other cases you put an inexpensive piece over the top of the existing switch.

So it comes down to decorating style really.

At my house, I am have a number of healthcare workers come in and out, as well as my housemates’ friends, and I don’t care that much about looks, so I just got very inexpensive ones. They cost around one euro. But you can get much more elegant ones.

Here are some inexpensive UK examples. These are typically found in the baby department, but people also use them to keep freezers or Aquariums from being turned off accidentally.

I know you’ve probably already seen this but for those coming first to this topic, the following topic is the FAQ for lighting controls for the UK. So if you did use a switch cover on the existing switch, then the following topic shows a number of alternatives for actually controlling the smart bulb under option 2)

Here are the ways I’ve thought of doing this:

Removing a manual control by bypassing a switch will leave you without a way to operate your bulbs if you have network problems, your hue bridge fails, or smartThings is having problems.

Now I live in the US, so I am kind of out of my element here. However, you may be able to take what I’ve given you and apply it to your needs.