I’ve recently decided to add some hue bulbs to a circuit that already has wave switches on it. The idea being that the wave switch is handy if someone inadvertently turns the switch off I can turn it back on remotely to make sure my bulbs still work. What I want to do is have it so if the switch is on and someone presses the on switch again that the hue bulbs will turn on. Has anyone ever done this? If so,how?

It’s generally not a good idea, but if you just want it for an emergency use it should be OK as long as the switch is just an on/off switch and not a dimmer.

Smart bulbs are intended to always be on power. If you have a power outage every once in a while, it’s not a big deal, but if you regularly cut power off at the switch then there’s a danger of damaging the radio with inrush current when the power comes back on, which can significantly shorten the life of the bulb.

Thanks for the reminder on the hue bulbs. I have actually been following that thread for a while. My family is pretty well trained to not use the light switch the only time they do is when the internet is down or smartThings is being stupidThings for that day. I have one scenario where our cleaning service continually turns off the bulbs by the switch so I am trying to make it so the one time a week when they are here they can hit the switch to turn the lights off I can turn the switch back on after hey leave.

What I am concerned about is the very thing you pointed out which is they come in and hit the on switch but the switch is on and the bulbs are off. The first Thing they do is flip the switch off and then back on and then when they are done they switch the switch back off. This kills the power to the bulbs two times. Which doubles the chances of the bulbs being damaged.

To reduce this risk I was hoping to use the zwave switch on to send an on to the bulbs as well as a backup invade the internet is down.

I hope this makes sense. If it’s not possible, I can just mount tablets over the switches so they can be removed if needed, but in the cases where I have three switches on once circuit that could be expensive.

I also have people in and out all the time. I just use the one dollar switch locks on the switches that I don’t want them to turn on and off the switch. 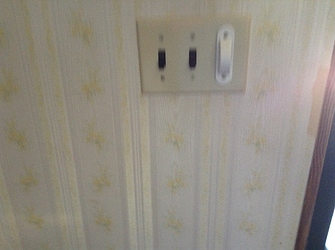 For ( roughly) the same price as a GE switch you can get a Hue dimmer, just mount it by the switch. Give them the switch they want, have local control for internet/cloud issues and not have to worry about messing up mesh or reduced bulb life from cutting power to them.

I use covers on my wall switches just like JD for my smart bulbs.

I use covers on my wall switches just like JD for my smart bulbs.

Yeah. I wanted something that was more aesthetically pleasing, but so far my wife hasn’t complained about the Hue dimmers. I am going to mount a tablet over the double or triple gang boxes and put switch locks on the others I think. Then put philips dimmers next to the locked ones.

I am one of the other guys that have z-wave switches and Hue. Having them for a year and it not much problem at all. I don’t use the tap up for color but I don’t see it’s a problem if you have HomeSeer switches because they support double tap.
For me. I use ST smart lighting smartapps to sync my hue to the z-wave switch so when switch off/ hue off and when switch on/hue on. By doing this. The Hue will response to your next command in the ST app when the switch is On.

Curtious about this one.,… if power is killed to the bulbs by the physical switch, could you have a rule that turns it back on and then issues a hue off instead? If you issue the ‘hue off’ first and then power is restored via the zwave switch would it turn on the lights momentarily first?

if power is killed to the bulbs by the physical switch, could you have a rule that turns it back on and then issues a hue off instead?

The cost to do this is really not worth the benefit. But yes, you can do this.

If you issue the ‘hue off’ first and then power is restored via the zwave switch would it turn on the lights momentarily first?

Hue will always default to on and full brightness when power is restored and the switch is on.