Is it still the case that the scenes from Hub v2 are saved always as “SceneX ON” & “Scene X OFF”?

I have a v1 Hue Hub, but there’s nothing about that functionality in the Philips Hue API documentation.

UPDATE: there’s also nothing like that in the scene data from a v2 scene created in the CLIP API Debugger. Buuuuut - v2 scenes have an “appdata” parameter in which I could store on/off state. Bottom line is that I will do it, but after the functions I’m working on now.

That didn’t help me. Same problem of not updating. I am using a V2 Hue bridge and the V2 ST Hub.

when I tried to remove an added bulb.

Ok…I run off mostly from my Android phone. I just tested removing / adding a bulb on my iPad and…lo and behold it didn’t update like it does on my Android - which indicates that its an iOS app bug. I’ll see if there’s a workaround.

Any chance you can change the status of the Hue Bridge listed in the Things section from “Hue Bridge” to “Online”?

Not sure what you mean. If it was offline, the app wouldn’t see it.

Thanks. Not a big deal, I got all of the bulbs added and the real functionality of the smart app is working great so far. 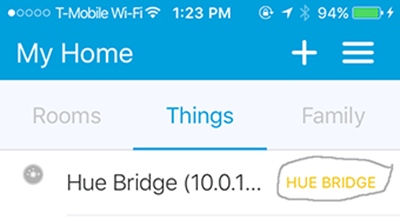 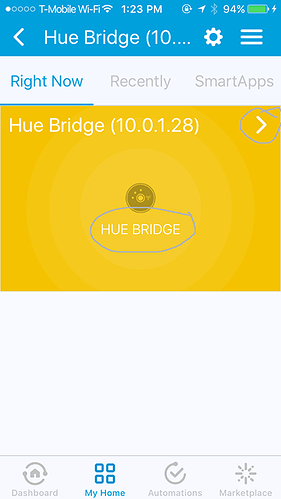 Same on this page, change the Hub Bridge to Online. Also, the directional arrow circled, leads to no where, loops back to same page.

I’ll be adding push light state updating. The current beta only updates the light states on a pull instead of a push basis.

How often does it pull?

Can you two either post or PM me the IDE log of when you add / remove a bulb? Adding / removing a bulb, group, and scene automatically updates on my system so I’m a little confused on why this is occuring for you two. Also - let me know what version of Hue Hub and SmartThings Hub you are using. Thanks!

Both logs are the same as @Michael_D. I am also running this on a iOS device. When I try it on an Android emulator on my PC it works fine. Both hubs are V2

Thanks, so is it equivalent I just use a core Piston to hit refresh? Or do you use some more internal, efficient implementation?

That should work. Or use Pollster smartapp.

Switched over last night all working great on multiple bridges

What are quick fixes? I try to add them but can’t due to not having a device handler for them but there isnt one on your github

Quick Fixes - it’s my attempt to integrate schedules from the Hue Hub. I use a Hue Hub schedule to restore the light state (color/hue/saturation/level) of a scene after a physical switch off–>on within 1 second. It offloads the processing to the Hue Hub and it Restores the light state faster than ST can. Haven’t released the DTH yet.

Does this work along with hue connect? Or do I need to delete all my bulbs and my bridge to make itstrong text happend?

You need to delete your current setup and install the smartapp and the associated device type handlers.

Install yesterday and all seems good so far. Only issue I have run into was trying to setup a core piston with 2 x hue White Ambiance and a ST Motion sensor which didn’t work, started off only turning one light on and would not turn them off after a wait time. But this could be a Core issue rather than Hue B Smart.

Keep up the good work! And let me know your thoughts on the Core issue.
Cheers

If you are still having problems, could you send me Piston and IDE log?

I’ve not installed this yet and will probably wait until V1.1 just because it’s a PITA re-configuring bulbs… but looking forward to using it!

I do have a question though and suspect it’s not possible… but is there any way to pass a scene change from Hue to ST or does your app do this already?

Basically I have a Hue Tap and Remote and I’m writing a HA app from the ground up to do very many things, but ideally I’d like to stop some of the automatons if it detects that a scene has been set by the Hue Tap or dimmer… Even with latency from Hue this would be better than nothing!

Thanks for the app. Love the way the scenes/groups work, but I do have 2 questions: