When I first started my home automation journey I installed a ton of GE branded switches. After they all started failing about a year later I replaced them with Inovelli switches and those have held up well so far. Now even the stupid add-on switches are dying on me! Is there any other brand that makes add on switches for Zwave switches in a 3-way setup??

Have you considered filing warranty claims on your failed jasco switches? They’ve replaced 3 or 4 of mine that failed over the years.

Inovelli’s White series are add-ons. I wonder whether the Jasco/GE add-ons are technically compatible with Inovelli switches - if they were working for you then probably yes, but I haven’t read anything about mixing them.

I wonder whether the Jasco/GE add-ons are technically compatible with Inovelli switches - if they were working for you then probably yes, but I haven’t read anything about mixing them.

They are compatible. Inovelli’s web sites says so. I use them for exactly that purpose with my Inovelli Red Dimmers.

Note: You can use this switch with an existing (dumb) switch or a special auxiliary (add-on) switch made by GE or HomeSeer.

Thanks for confirming. That situation hasn’t come up for me so I never needed to look it up.

I’d rather find another brand that I hopefully don’t have to replace every couple years LOL! I’ve done the installations myself instead of having to pay someone thankfully but it is still a hassle.

I’ve been switching my stuff to Zooz switches as the GE switches die. One minor inconvenience is that I have to replace the accessory switch back to a standard switch. Still works just fine with the same wiring (neutral+1 wire). And Zooz developed their own Edge driver that works well.

Zooz has amazing customer service; when you e-mail them they respond the same day with someone who actually understands their products, which is more than I can say for GE/Jasco. I also got some Eaton z-wave switches at Lowes when I needed a new switch right away and didn’t want to wait until the next day for Amazon. Eaton customer service is decent, but their device support in ST is not great (no edge driver) 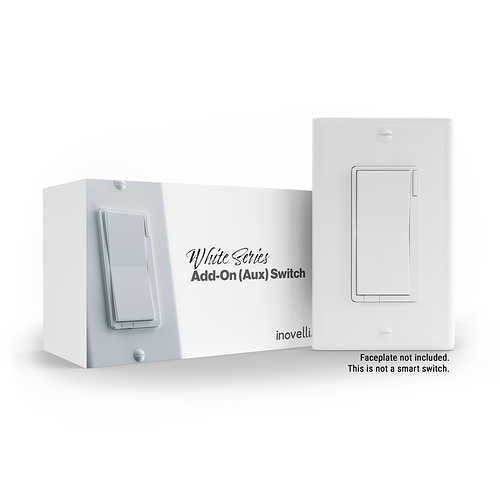 This is a special non-smart switch that connects directly to your Inovelli smart switch for use in a 3-Way (or multi-way) setup.

Back order, but the end of December is pretty close.

I have a bunch of them that I bought on clearance at Lowes for about $10 each.

Yeah I saw that they are back-ordered and not shipping till mid to late January. It’s funny that I’d looked on Inovelli’s site for an add-on switch and didn’t see the White switch, maybe because it was back-ordered? That would be my preferred solution but I’m not sure if we can hold out that long.

I have a few Zooz things, love their scene controller switch and power strip with independently switches outlets, but I already have the Inovelli switch on the other end that’s working fine so I don’t really want to have to replace that too

I’ve yet to have the GE Add-on switches fail on my … some have been installed 4-5 years (initially connected to a GE Z-Wave switch, which I later replaced with a Inovelli Red). But I only installed the Add-ons because the locations were originally 3-way. Once I automated the lights (usually tied to some collection of motion sensors), the Add-on switch got almost physical touches anymore. They could be failed and I wouldn’t notice…

I’ve yet to have the GE Add-on switches fail

Same here. I have some GE Aux switches (around 15 of them) that I bought in 2015 that are still working. The connected smart switch has changed a few times over the years but the Aux switches still work great. Other than the 2017 models (date code 17XX), the GE smart switches have been great. Jasco 5 year warranty allowed me to replace all of my 2017 models for new switches. If you are within the 5 year warranty reach out to them.