Continuing the discussion from Devices we don’t have:

I am developing a medical SmartHome and there are several devices that we could use. Probably the most significant would be a medication box or dispenser. Right now we have a portable electronic med tray that we can detect tilt. Would be nice to have Zigbee med tray that can detect tilt and control when meds are available.

Also we are using the moisture sensor to detect when a patient is taking a shower, but I am not sure that is the best device. Perhaps a more water proof version and / or a flowmeter (that can also go into a sink etc)

A sensor that can confirm that a door is locked without having to buy a smart lock.
Sliding glass door and front door.

Sensor to detect a hot stove. We plan to look at power draw right now.

I’m putting together a list of devices other people support, but we don’t. Specifically I’m looking for something that there is no alternative in the SmartThings Universe for. An Example is Lowes Iris has an Irrigation controller and SmartThings doesn’t.

So anything that jumps out to you that SmartThings is missing that other people have?

Home automation and people with disabilities
Logic to detect person not responding in bathroom
I have been given a project (medical wellness check)
Monitoring Elderly Parent - Need a little help and advice
Home Automation Options for People who are quadriplegic/quadriparetic
No Motion for a period of Time- Elderly Care
JDRoberts February 25, 2015, 9:48pm #2

Pressure sensor mats require a little wiring to connect to ST, but there are some community members doing that. On the other hand (literally) if the person will wear an UP fitness band, you get a lot more information and it works if they fall asleep in a recliner as well.

Door sensors to confirm the door is closed are easy with SmartThings, but I think locked will probably require a smart lock.

I’m sure a lot of people who don’t live with someone in a wheelchair will immediately come up with creative ideas about door openers, but as someone who is myself wheelchair dependent, I rely only on commercially produced purpose built products for these to be sure I’m getting a full set of safety features. “Move fast and break things” is not the right project development philosophy for automatic door controllers.

I have heard of several people using the Open Sesame (which you’re probably already familiar with) with zwave controllers, but I don’t know if anyone’s tried one with SmartThings yet.

(ST’s hub is certified for zwave basic command classes, which should give you on/off capability with most zwave certified devices, but that doesn’t necessarily mean you get access to all of an end device’s networkable features.)

In the current generation of SmartThings, nothing except some light switches will work if the power goes out or the Internet goes down. The next generation, due soon, will offer more local operating options, but we don’t know exactly what. I would assume an 80% reliability in the current setup, just based on my personal experience, but it does vary a lot right now.

never had high BP till the time I got into this hobby.

Seems like this is a good topic for this. Does anyone know the communication protocols for the two remotes for the Drive Medical Doormatic?

One is a keyfob with buttons, the other is a motion sensor.

Since this is made by a German company I wouldn’t be surprised if it’s a short range proprietary, maybe on a zigbee antenna but not open to anyone else.

But if anyone happens to find out, could you let us know?

I know this could be kluged very easily with a controllable fan to trigger the motion sensor, I’m just curious.

I’m considering developing a Z-Wave pressure pad sensor so you just plug one of the many types of pad sensors into a hockey puck sized device and then you’ll get OPEN/CLOSED notifications each time the pad is pressed.

I am developing a medical SmartHome and there are several devices that we could use. Probably the most significant would be a medication box or dispenser. Right now we have a portable electronic med tray that we can detect tilt. Would be nice to have Zigbee med tray that can detect tilt and control when meds are available.

What’s your budget for the medication dispenser? There are some existing wifi and zigbee units that could probably integrate with ST, but you’re looking at $300 - $900 per unit.

If you don’t need to actually limit access to the pills, you just want to monitor daily compliance attempts, a drawer or box or cabinet with an open close sensor is easy, and brings the cost way down. (Of course that doesn’t guarantee the person actually took the meds, just that they got as far as opening the cabinet. But that’s always an issue with unsupervised dispensing.)

Back to actual dispensers:

Medfolio’s wifi unit has a ton of features and costs under $300, but has a $10 monthly fee and you’d have to integrate it as a web service, which would mean custom code. Also, it’s not a certified patient records device as far as I know, in case that matters.

And speaking as a quad, I would find this physically impossible to use on my own. Which would sort of defeat the purpose. More for cognitive issues, I think. 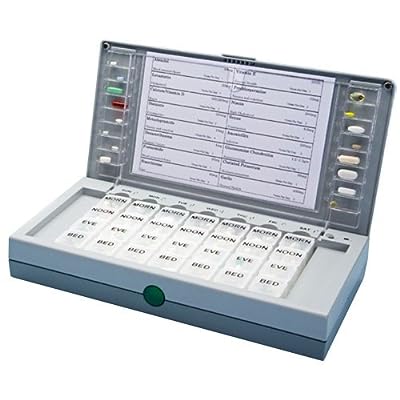 With built-in WiFi, the MedFolio Wireless Pillbox offers caregivers and family members a convenient way to monitor a loved one's medication adherence. Like the original MedFolio Pillbox, this wireless ...

For my own purposes, a reminder light that comes on and stays on until an easy open cabinet was opened would work best. But that’s not limiting access to one dose per day.

Pivotell, a UK company, had a really great certified zigbee dispenser that NHS used for home patients. But a couple of years ago they switched to GSM cellular with monitoring, so now it’s just a UK solution.

I don’t know if they even still make the zigbee version, but it might be worth looking at them as a proof of concept model since it is in the field, even if it’s England.

Also check out how their tilt dispenser works. Soooo much better than those little cup tunnels!

On the other hand, that’s also an expensive unit, it may be out of budget.

And this one is more longterm, but a fun approach to compliance…

If you have clients who are able to stand, then one form of wellness check is to have them incorporate a smart scale into their daily routine. They don’t have to do anything but stand on the scale and it can trigger some messages.

ST has been doing an internal closed Beta on one for awhile ( @Ben knows the details) . 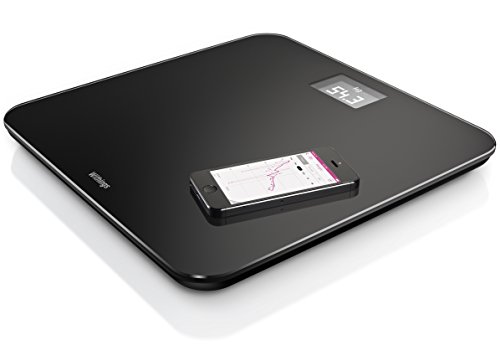 Staying healthy has just been made easier with the WS-30 Wireless Scale from Withings. With features such as wireless syncing, accurate weight and BMI tracking, and multi-user capabilities, the WS-30 ...

For people who would make this an automatic part of their routine and who, for whatever reason, don’t want to wear an UP fitness band, this would at least give you some data points. And obviously has a high coolness factor.

Not sure this is something you’d use with everyone. But I could definitely see it as one option for a medical SmartHome.

medication dispenser for potential tilt sensor use case: Woke up this morning and realized a tipper like the one pivotell has would solve a bunch of problems for compliance attempt tracking. (Again, no way to know for sure if the person actually took the pills or not.) And you could build something similar probably quite inexpensively to hold any large rotating dispenser.

So the dispenser does its work without needing any networked features. Instead, just tilting the tipper triggers the tilt sensor, and that becomes an event ST can capture.

The only question is how to handle false alarms. If it was me, I’d put the entire setup, tipper + dispenser, inside a cabinet with an easy open door. But low enough to be used in place. That would also hide the dispenser, which is not exactly cool.

Anyway, just seemed like a lower tech, lower cost approach to tracking compliance attempts, but physically easier for the client than having to lift something big enough to attach a tilt sensor to.

BTW, I just today added totally hands free voice control from an iOS 8 iPhone with Siri for anything that’s controllable through the IFTTT SmartThings channel. If the client already has an an iPhone with iOS 8 Siri and unlimited SMS text messaging, there is no additional cost or custom code needed to add this.

It works! It works great! Totally handsfree voice control. I had briefly looked into IFTTT before, but dismissed it as an option because I thought it was too limited. As mentioned before, I love my ipad, but didn’t have any smartphone as physically they were too hard for me to use. (I’m quadriparetic with limited hand function.) But @Will_Poirier brilliantly noticed that you can use one SMS message to IFTTT to trigger multiple SmartThings channel requests. And with iOS 8 and handsfree Hey Siri I can now do everything handsfree. No custom code, just the simple IFTTT rules engine. As for hardware and costs…if you already have an iPhone and unlimited text, this adds zero cost.

I had messaging for my iPad 2, the one on my wheelchair, but no Siri. Coincidentally, I got an ATT…

touch screens: I know you said you wanted solutions that didn’t involve a smart lock. Not sure if that was for cost or other reasons. But just in case someone else reading this topic does have an interest, I just wanted to mention that there are different types of touch screens on different brand locks, or any devices with panel controllers.

The Schlage locks I looked at all had resistive touch screens. This is the older, cheaper touch screen technology, and requires an actual press.

Some other brands have capacitive touch screens. These are like an iPad, you can even register a “touch” just above the screen.

Many people with limited hand control will find a big difference between usability with the two technologies, but will have different preferences.

Resistive screens can be worked with any kind of mouthstick, for example, while capacitive screens require a special kind. On the other hand, not everyone can generate the controlled pressure required for a “light press” on a resistive screen.

So just wanted to mention if you’re buying something with a " touchscreen," the usefulness may vary for different clients depending on the type of screen and their particular physicality.