I’m about to start my first foray into basic home automation, starting with some switches for light timers (replacing rockers) and wall plugs.

I’d prefer to make everything blend in and match what I already have (no logos or extra buttons). For example: my current light switches are basic rocker switches similar in appearance to these. My wall outlets are as basic as you can get.

Anyone have any suggestions? Most of what I’m seeing when searching online either has an extra button or two, or a logo (z-wave or zigbee) printed on it.

Thanks in advance for any suggestions!

I’d recommend the new homeseer switch line. These are well engineered switches, the newest Z wave plus generation which will give you the longest range, and have a nice double tap and triple tap feature which no one else has. Very simple design similar to what you currently have, I think.

Monoprice also carries a bunch of no logo devices, but to be honest they’re usually the least expensive for a reason, and not necessarily very well engineered.

As far as in wall outlets, I think they’re all fairly similar looking. zwaveproducts.com has a pretty good selection:

I believe it’s part of US electrical code now that networked outlets do have an indicator that they are networked. So you are going to see some kind of LED or logo on many of them. This is supposed to alert someone working on the outlet that even if it seems like it’s off it might be turned on remotely. So they are not going to be completely plain like the wall switches can be.

Also check the descriptions carefully. And maybe search for additional images. Sometimes the Z wave or zigbee logo is just an overlay on the picture to call out the protocol, it’s not on the actual switch. For example the blues zwave plus logo on the homeseer picture up above isn’t on the actual switch.

Here’s a pic of the GE switches next to some plain rockers for comparison. The homeseer ones would look very similar I think, maybe even a little closer to the rockers as they don’t appear to have the air gap pull-tab on the front face like the GE ones do. .

Thanks! I’ve seen switches like the ones on the left- what is the small button on the bottom left for?

That’s an air-gap tab. Here’s the best description I could find of what it’s there for

The “air gap” is just a manual way to shut off power so you can change the bulb without worrying someone else in the house with turn your switch on just as you are licking the bulb socket clean with your tongue.

Oh, I see. That would explain why they’re not present on “add-on” switches for lights with multiple controls.

Also, if you hate the LEDs, sometimes you can turn it off programmatically, but not on all models. So check for that feature if it’s important to you.

Or you can cover the LEDs. At our house we use cover up stickers that are made for this purpose. They peel off cleanly and work way better than electrical tape. 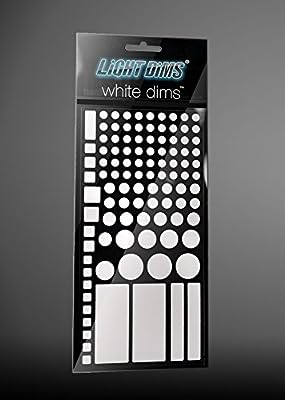 Search for “LightDims Get all 6 Kinds” to get all our products at once for 45% off the retail price. White Dims ™ LightDims blend well with White Electronics, such as Baby Monitors, and Smoke Alarms. ...

My family has learned to ignore them. In fact I put the smart app in that keeps them turned off on fan dimmers. Then set the overhead light switch so led was off when switch was off. I asked my daughter if that helped with keeping the light down in her room. Reply was huh? Didn’t even notice.

Need less to say, I was feeling the love. Ouch!!

Also with the GE ones I like that I can go to my local lowes and pick one up if I want to. I have over 25 right now with about 4 more to do.

I just went through the same thing. I have a bunch of on/off toggle switches though. Ordered a few GE toggle switches ($39) and dimmers ($39) as well as some [Zooz on/off toggle switches( $25)] (http://www.thesmartesthouse.com/products/2-zooz-z-wave-plus-on-off-toggle-switch-zen23-2-pack) and dimmers ($25). The Zooz switches look similar to the GE, but the GE has a nice tactile feedback when you click the switch that I like. The GE also comes with a white/neutral jumper that is required (you need to make your own with the Zooz). The Zooz are Z-Wave Plus which is nice and they are a lot cheaper, so I went with more of those for the rest of the house, even though I like the feel of the GE better. The Zooz (and maybe the GE, don’t recall) need to have short srews when you screw in the wall plate as the screws actually go into the body of the switch. Both switches stand out a bit from the wall, making the wall plate stick off the wall a bit. I had to shave down the screw holes in the wall plate so it would sit flush against the wall. 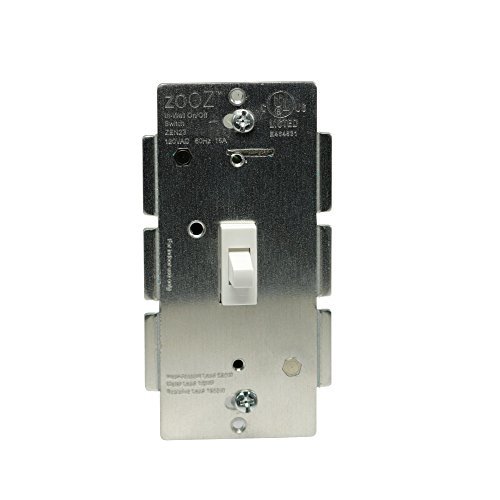 Note that most of these switches and outlets do not come with wall plates or hardware. I bought a bunch of these $0.65 wall plates as they fit the paddle style switches as well as the Z-Wave receptacle outlets. They also come with the short screws required by the switches.

The air-gap can be useful for troubleshooting as well. This isn’t nearly as big of an issue as it has been in the past, but we used to run into situations where the switch would stop responding to commands and get “stuck”. Pulling the air gap for a few seconds would get it working again. It’s also an easy thing to try should your light switch fall off the network. You can think of it like rebooting the light switch!

I picked up one of the basic GE branded rocker switches at Lowe’s just to get my first one up and running. I’m amazed that once I had everything connected the SmartThings connection was so simple. I’ll probably go with HomeSeer for future rockers. Thanks for your help!

How reliable are the GE in-wall outlets turning out to be?

I have now had three separate GE smart plugs go bad on me, and since I now have a good idea where I need Z-Wave controlled outlets, I figure I might as well install in-wall outlets (and upgrade to Z-Wave Plus at the same time. But I’m a bit worried that the problems their smart switches have might be common in their other devices too.

Good to know, thanks. Now I have to decide whether to wait until they offer Z-Wave Plus versions.

I have over 20 switches about two months now mix of paddle and reg like. No issues at all.