I know there have been a lot of posts about the GE 3-way dimmers. I can’t seem to find someone with my same problem though.

Existing conditions:
Switch 1
2 black wires (twisted together with a wire nut) a single black wire coming out of that into the switch
1 White wire - into neutral
1 Red wire
1 Ground wire

I successfully installed 1 of the switches into a non 3-way switch using the Red wire as the Line and Black as Load (with neutral and ground installed as well).

Any chance anyone can walk me through how I should wire this correctly?

(Pics of Switch 1 below)

check your wires with a meter. Most (not all) 3 way switches have black (load) white (switch return)
and red as traveler. you’ll need an additional neutral.

Agreed. Check the wires with a meter and see if you can figure out what goes where. This site offers good diagrams of possible 3-way switch wiring - http://www.easy-do-it-yourself-home-improvements.com/3-way-switch-wiring-diagram.html

Switch one the white is most likely NOT neutral but load or Hot (must be measured with meter. Normal switches do not require a neutral and they are usually ganged together and in the back of the box if available. Most likely the Red is the traveler (again needs to be measured).

Switch two (replaced with the add-on switch)
The add on switch does NOT actually control the Light it talks to the master (switch one) to control the Light. on these the Hot and load are wire nutted together the red Traveler connected to traveler and the Neutral in the box tothe neutral.

again you will need a meter to confirm the wires properly…

That switch in the photo doesn’t look like a regular switch. I’d be inclined to believe that white wire is indeed neutral.

That switch in the photo doesn’t look like a regular switch. I’d be inclined to believe that white wire is indeed neutral.

You are correct. That looks like a GE switch he installed and it’s not working.
@deeandmaribel, is it possible to put back the old switch so we can try find out load, line and neutral?
Here is how to check for line and don’t know neutral yet. On one of your switch. Put the + probe of your meter on the common screw and the - probe on the ground. Do you have 110v? If you do then flip the switch to the opposite position. The voltage should still be there. Also do the same with the other switch. If voltage is always the regardless of switches position then that’s your line hot. If voltage drop to zero when switch flip then that’s your load. Now do the exact same thing on the other switch.
Once you know you line and load. Here’s how to check for neutral. Well disconnect the line from the switch. Flip on the circuit breaker. Put the + probe on the line wire and - probe to one of the white wire. Keep doing that too all the white wire until you find the meter reading 110v. That’s your neutral. Second confirmation of neutral by measuring resistance between neutral and ground with the breaker off. You should get less than 10 ohm.
The wiring at your box 1 looks like a bird nest in there. That’s a lot of wires

The picture is what the GE’s are wired like not the original switch.

@Navat604 @jarettp You’re right, the original switch is a 3-way Lutron (shown in the picture in it’s functional configuration). 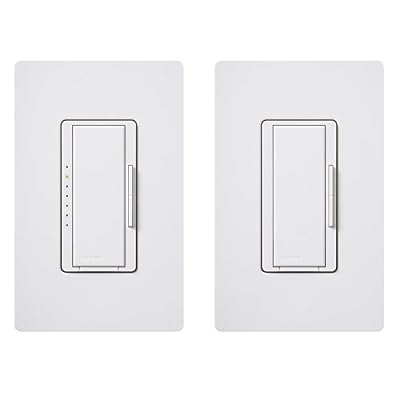 Full range dimming possible from up to 10 locations. LEDs show preset light level when product is off. Lights fade up and down smoothly allowing your eyes to adjust to changing light levels. 10 second ...

I’ll get the multi-meter going when I get home from work.

I’m pretty sure the Red wire is the hot wire, since I got the GE dimmer switch connected right in another non-3-way switch. I’m also pretty sure that the White is Neutral because of the way it is connected to the Lutron 3-way.

But then I’m wondering which wire would be the traveler?

Thanks a ton for your help!

The lutron 3 ways pair you have usually don’t use neutral wire for their hookup. They usually just control the load hot and the neutral is connected to the other side of the load but that’s just a standard hookup. The trick is to look at the black common screw on the switches on a 3 ways. That’s where your line and load live. I can’t guess the traveler unless you have a picture of the original hookup.

The black or red wires are the traveler more than likely. You should be able to connect the first switch, turn it on, and test both at the second switch. Honestly all you need is a voltage detector to do this.

That is a picture of the original working hookup.

A picture of the second switch would be helpful.

I’ll post one when I get home from work.

Thanks again everyone for all of the help!

Then I would guess the red and white are the travelers.

Edit : black wire is your line hot. Neutral hidden somewhere in that box and your load is at the other box. Of course they are just guess.

Honestly all you need is a voltage detector to do this.

I never recommend this method to anyone actually. It’s a great device for checking if there is voltage there or not but it’s not meant for identifying wires. One example would be if your line hot is going to your light bulb then down to the switch. That detector would always beeps even though we know that’s not line hot. Not to mention open end wire close to live wire.

How common is it for the hot to be wired directly to the bulb in that fashion? Seems like that would be a huge electrical shock hazard.

You are right. I screwed up on the writing. I meant the neutral going to the bulb and down to the switch.

Thanks everyone for the help. I ended up having my uncle (an electrician) come out and get me squared away.

He moved all kinds of wires around and I got lost trying to follow what he was doing. But it works now!