Hey all! I have been for the last month slowly building my smart home. I have 5 GE switches and motion sensors and door locks. Just about everything has gone really smooth! Up until I tried doing the 3 way switch in the kitchen today. Here is my issue, I’m gonna have to spell it out and I can put pictures in tomorrow if necessary. I have two switches in the kitchen. One by the sink which is the add on and one by the door as the primary. I installed a ge on/off switch in the add on spot since there is a neutral wire. In the add on spot there are 4 wires. The load, line, neutral and traveler.
However in the primary switch by the door there is no neutral wire. There is only a traveler a line and load. So that switch I’m assuming is not able to be upgraded at all without a neutral wire.
I tried for about 2 hour today multiple combinations of the add on by the sink and the primary by the door and nothing seemed to work to get both as a smart switch. Aside from having a regular smart switch in the add on spot and leaving the primary door switch as is. Does anyone have any suggestions that would work for my scenario? Thanks in advance!

With GE switches, the master smart switch (switch with load) must always go where the power from breaker is (where the neutral is). The GE add-on switch (one with just traveler/neutral) goes in the other.

It probably would be helpful to see pictures.

The add-on doesn’t require power, so uses on of the wires in its box to connect back to the neutral in the main’s box.

Or tell us which option # you have here and we can help:

So the first pic is of the add on I assume. The second of the primary switch in a double gang box. (In next post bc only let me add one image)
The add on has 4 wires. What I don’t understand is when the double is switched ON the white it the hot wire. And when the double is switched OFF the red is the hot wire.
The double may be a little hard to see what’s going on. There are 3 wires coming out of the back of each side. A black red and white. They wired the black out of the right one and the wire out of the left one together, which neither have power. Then used the black from the left one and spliced it and use it to run the right one.
It’s a huge mess but I hope that helps a little. And that you all forthe information!!

Double gang box with the one on the right controlling the same light as the pic above.

With GE switches, the master smart switch (switch with load) must always go where the power from breaker is (where the neutral is). The GE add-on switch (one with just traveler/neutral) goes in the other.

Actually, if you tie the line where it comes in to the box to the black leaving the box for the other switch you can then place the GE master switch/dimmer at the other location.

Edit: reading the post you replied to again I see the issue in this case. But in general, it’s a misunderstanding by many that the master switch must be located in the box the line from the breaker box comes in to.

I do have the master switch installed in the box with four wires now. but it only works if the double switch is in the On position. If I switch the double switch to the off position the blue light goes away and the switch is rendered useless.
Edit: typo (got off and on confused) haha

There is some drawings / images in this topic around post 12 that will help visualize how to wire up a 3 way.

Doesn’t have to always be this way. For me a visual just helps wrap my head around it or figure out what I need to do to get to where that drawing will work.

OK so I think I see your issue.

Because of this, you can’t use normal 3-way switches with smart switches.

You need to replace both switches in a 3-way. You can’t use regular switches with smart switches.

Here is the GE add-on switch for 3+ way setups. 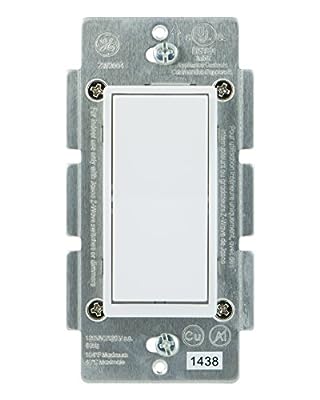