In SmattThings Classic I regularly fired routines manually. For example, I have a routine that runs at 7pm to trigger changes in lights and thermostats, which is around the time we eat. If we sit down to dinner early I can always trigger it. I do this with a number of routines at of times.

However, there appears to be no way to trigger an automation manually. Am I missing something?

Setup a Scene that has all the actions you want to fire.

Create a scene. You can trigger it manually from the app or make a widget on your home screen.

I agree that the scene is the easiest way as long as you can get all your actions in the scene. In addition, it overburdens Scenes. For example, you may have a lighting scene, “Evening” and you may have an “Evening” automation that also sets thermostats. So there are 2 Scenes for Evening. If you have a lot of automations and lighting Scenes
by the time you cray 2 for each you really have a lot of Scenes to deal with.

You can have the automation call the scene so you’re not duplicating anything.

This goes back to the very most basic level of smart home automation.

Scenes are POINT IN TIME, Automations are CHANGES.

Use a scene to manually trigger changes (I do this all the time, have it as the very top of my ST app list) then have automations fire scenes automatically based on a trigger (time, presence, etc.).

Perhaps different than classic app (not being able to fire automations directly), but more common sense if you ask me.

Also, if you are manually firing changes all the time, perhaps figure out triggers or a device status that could change to fire it off. The entire point of smart home automation is to make your home do what you want, when you want, how you want.

I finally made the migration to the new SmartThings last night. So many things broke. I’m in pain.

Manually triggering Routines was my thing in Classic. As advised here, I’m trying to do Scenes instead, but there seems to be limitations on what I can do. For starters, how do I change status of SmartThings Home Monitor in a Scene?

Here’s how & why I would manually trigger Routines in Classic. Do any of you smart guys know how to solve for this?

Ideas? Solutions for these?

Ideas? Solutions for these?

The easiest way for all your use cases is a virtual switch which then triggers an automation which does whatever you want, including change the STHM security.mode. 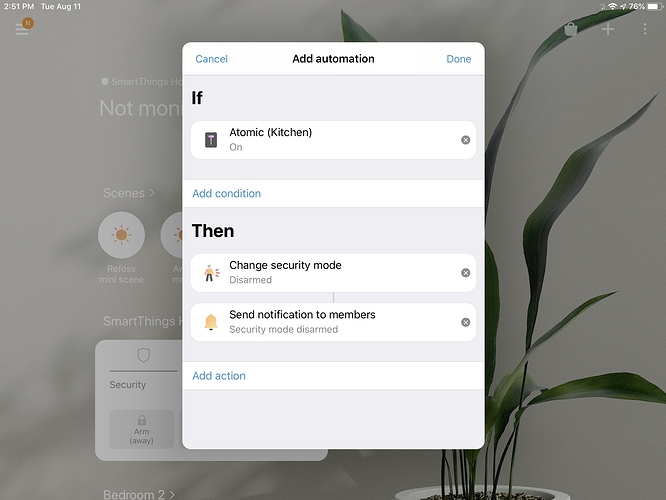 If you want to use it as a scene in order to make a widget out of it, just have the scene turn on the virtual switch.

I personally use the power allowance feature to have the virtual switch turn itself off again after a minute so it’s available for the next time, but there are also other ways to manage that.

It’s a little clunky, but it works.

This makes sense, but I’m struggling to figure out how to add a virtual switch in v3. Still via the IDE?

yup, unless you happen to have installed the virtual device creator in the Classic app. Then it shows up in the new app, too.

Aha! Thank you. I installed that in classic, created a switch, and “migrated” again. Now I can do my “vacation” automation that was originally a scene but couldn’t migrate over because it disarmed SHM.

Ok I might have figured out how to fix the problem I had with this. I think it is the same problem! Mine was not being able to manually run automations which in turn set the alarm status.

My work around was as follows…

This might not work for all cases and I need to try and get it to work for arming too. But give it a try.

I will continue to use it to see if it solves it.

Screen recording of end result if this forum lets me post it. https://youtu.be/ISGDkgDA02A