Looking for a chime

My doorbell situation is seriously lacking with a broken chime in a hard spot that can’t really even be heard when it works. On the plus side, I have hardwired doorbell buttons at each door.

So! It seems that it should be easy to find some dry contact sensors that notify ST when a button is pressed. Then ST can trigger some kind of chime, send a text, whatever. I read a bunch of threads about doorbells with all kinds of bells and whistles and so on, and I read the brief “let’s make our own doorbell” thread. I really just want to detect button press and have a device make a noise.

I saw someone used door sensors, that seems to make sense. But are there any small dry contact sensors? Also, is there a simple little device that can be told to make a noise?

This is the same concept. Program ST to play music, turn on a light, or blast a siren when the contact is closed.

Hi, Just figured I would post the other thing I’ve made so far. I found this instructable through a friend at work: And bought a few of those door sensors from MonoPrice because they were relatively cheap at 24 bucks and they had the 3rd unused switch that was unused internally and had it’s own screw down block. So from there I did the following: drilled two small holes wrapped two lengths of bare wire double helix style down a length of nylon rope (so they never actually touch) zip tied both ends to keep the bare wire in place on the rope attached the two bare wires to each of the screw down terminals closed up the mono price door sensor, hot glued and duct taped it to make it water “proof” wrote a new device type based on the zwave water sensor (had to reverse some logic and chan…

Honestly the easiest thing is just to get the Aeon doorbell. It has two pieces, a button that you push and a sound player. The sound player can have up to 99 different recorded sound files, and you can upload your own and have different sounds play for different triggers or even at different times of day So it’s really useful.

For $50, it’s hard to beat the functionality. Pre-order the Gen 5 Doorbell Now! Your Aeon Labs Z-Wave Plus Doorbell Gen 5 supports playing MP3 music files with a press of this Doorbell.

The Amazon reviews aren’t great on it because it can be really fidgety to pair the first time. But after that it works very well. There are a couple of custom device type handlers which expose all the features.

If you just want to wire a sensor to the existing doorbell, there are several ways to do that, as already discussed in the forums. But because of weather and size considerations, you’ll generally put the sensor on the inside of the house and run the doorbell wires to it.

There’s a quick browse list under projects in the community – created wiki for “doorbells.” You can find several different examples there of how people wired an existing doorbell.

Thanks @JDRoberts, can the sound player be triggered by the ST hub without it’s buttons?

Thanks @JDRoberts, can the sound player be triggered by the ST hub without it’s buttons?

Yes, that’s one of the very cool things about it. You don’t need to use it as a doorbell at all, you can just use it as a sound player.

Or you could trigger sound based on a pressure mat under the welcome mat at the door, or a camera detecting motion, or even time of day. One community member is using it as an hourly clock chime. Quite a few people are using it with core.

Here’s one very popular device type handler for it.

This is a device handler for the Aeon Labs Aoetec Doorbell (ZW056-A). THINGS YOU NEED TO KNOW If the doorbell button isn’t working, try pressing the up and down volume buttons on the device at the same time. Pressing the Physical Doorbell Button executes the “on()” command, but due to the way the hardware functions, the sound will play before the events are raised in ST. When the device turns on, it automatically plays track 1. Some users have reported the doorbell randomly ringing without the button being pushed, but using a couple of seconds of silence as the first track appears to eliminate that problem. Example of empty sound file: Silence.mp3 The doorbell button doesn’t work if you’re holding it, but it works most of the time if you have it on a hard surface. The tra…

Is it loud? It says 80db but I have no sense of how loud that is.

Can I connect two of them to the same ST hub?

Yes, you could have two of them. It’s just like having two lightbulbs or two light switches, each one has its own network ID so SmartThings can tell them apart.

For comparison, a garbage disposal or a small blender are also typically around 80 dB. (They used to say a dishwasher was 80 dB, but the current ones are much quieter.)

You would have to raise your voice to be heard over anything that was in the high 70s or above, but you probably wouldn’t have to yell until you got to the high 80s.

Thanks again @JDRoberts you’re a fountain of great info!

I have been reading the reviews on it at Amazon and there are many poor ones, but these seem to all complain that the range of the button and overall quality of the button is poor. So as you said, it sounds great for my plan (to use my existing doorbell buttons). I also saw that it can be made to play different MP3 files, so now I can have a different alert for the front door and back door.

Just FYI, what I did for the doorbell is to buy this: 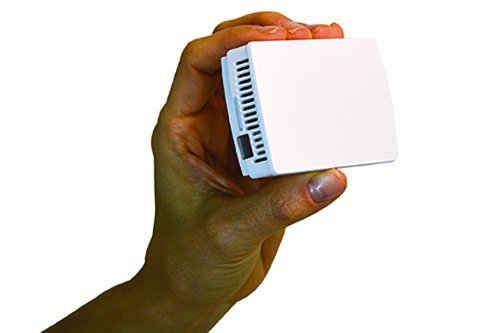 Nexia-compatible smart home devices. The doorbell sensor connects directly with your doorbell chime and communicates through nexia's web or mobile app to let you know when someone is at your door. Cer ...

I read up on it and at first it was hard to get the right driver but by the time I bought it I just used the standard ST “button controller” and then I got a chime audio mp3 and I use the notification to trigger Tasker to play it. But only when I’m not at work (based on cell id of the cell towers near my work). That’s the power of combining Tasker, android and SmartThings together. Who wants to know the doorbell rang with a chime while at work? (I do still get the notification on the top notification bar of course, just no audio)

Let me know if you want more info, I’d be happy to take some time to write it up.

This nexia thing is really convenience for me also. I was able to connect it up down by the transformer for the doorbell instead of on the wall by the actual chime. So basically infinite WAF (wife acceptance factor).

Before I got into all of this fancy ST’s stuff, I bought a Honeywell RCWL300A1006 Premium Portable Wireless Doorbell / Door Chime and Push Button with their motion detector. About $63 total on Amazon. No need to install the push button. One of my best low tech purchases.

If somebody walks to my front porch you can hear the portable chime anywhere in the house. I usually make it to the front door before they ring my standard doorbell button. The motion detector is rated for outdoors. Had these for about 3 years & have never changed the batteries.

Yea, no way to hook them up to ST’s, but I think low tech is sometimes better than high tech.

Edit: Yea, I like the low tech stuff for somethings, but do have a Ecolink motion sensor on my porch that turns on a bunch of lights & hoping to get Ring for Christmas. When you get hooked on the fancy stuff, it never ends!

2nd edit: forgot to mention. My neighbor dog learned if she came to my front door, I would know it (couldn’t reach the door bell but the chime would go off) so I could give her a needed belly rub. She passed last year, but still have my 2 grand dogs.