It’s also great for other products. For example, I have links to Harmony, Ring, Sonos, Rachio, etc. As much as I love Alexa, sometimes, it’s easier when walking by to press a button 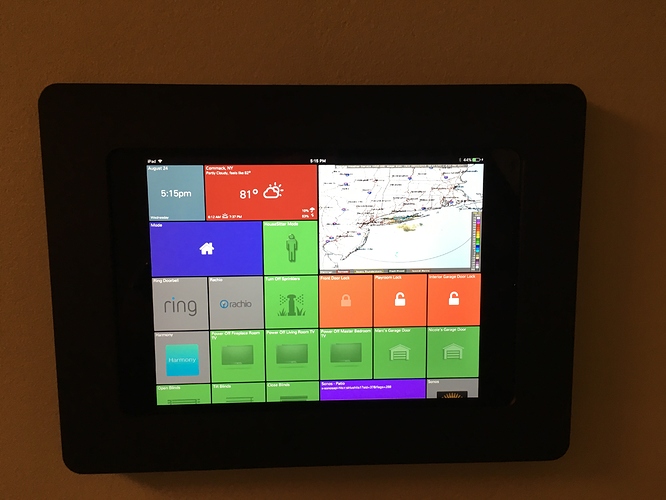 Hmmmmm… i like that for ring… how good is that thing?

Did you ever do door locks? I installed them on each of the outside doors after our cat escaped when an unlocked door blew open during the night. Seemed to escape with just a nasty coyote bite on his rear … Ad I guess now has only 8 lives.

Anyway - the locks have been a big hit - not just the ability to control automatically and know what’s secure but simply replacing a key and being able to just open the door when carrying groceries etc has been a big hit - I was very pleasantly surprised!

Only worth doing once you’ve got a reliable mesh and over the initial tinkering IMO.

Did you ever do door locks? I installed them

I hanger not done locks. I want to but my wife is solidly against them… I plan on them in the future.

I haven’t used it for Ring yet, but it’s nice to know it’s there. I would literally have to be walking right by the tablet while someone is at the door which is up a short flight of stairs and 5 feet away. The mostly used tiles on my tablet are weather (who doesn’t like the weather?), Harmony app link, power down tv tiles as well as the Sonos ones.

Ha…makes me think of Bones and Spock in the new startrek.

Spock : “Lieutenant Uhura wears a Vulcaya amulet which I presented to her as a token of my affection and respect.”
"McCoy : "You gave your girlfriend radioactive jewellery?"
Spock : "The emission is harmless Doctor, but its unique signature makes it very easy to identify."
McCoy : “You gave your girlfriend a tracking device?”
[Long pause]
Spock : “…that was not my intention.”
"McCoy : “Well I’m glad he doesn’t respect me!”