How to keep people from manually turning off switches associated with smart devices?

This morning, I found my wife had gone through the house and turned off all the light switches, taking it all offline.

So I followed back through, turning the switches back on, and sadly, I had to use a strip of clear packing tape to keep the switches in the on position.

Is there a more elegant solution to keeping folks from being forgetful and by habit manually turning switches on and off?

Long term plan for the lighting, but what about the floodlight camera?

People most typically run into this with smart bulbs, so there are a couple of FAQs in the forum that should give you some ideas. The same principles apply whether it’s a Wi-Fi camera, a pump, a smart bulb, or any other device where you don’t want the power turned off at the switch.

The main solutions all come down to a couple of basic categories:

For a device which should be turned off only in emergencies, probably like a camera, there are also switch locks available which are intended for use with things like freezers or medical equipment. Very similar to the child safety locks, it’s just that they lock completely.

But again, read the FAQs first, they should help.

FAQ: Looking at a good Wall Switch for my Hue Bulbs (2020 Short FAQ) ( also applies to other brands of smart bulbs) FAQ

Looking for a wall Switch to replace the one I have atm. What i need it to do is -Turn on Off -Be integrated with Smarthings and Alexa (No wifi if possible) -If it mathers be compatible with Hue Lights

No cost approach is to:

Best solution is to use Smart Switches.

I agree… they also make switch locks which screw into the plate screws and keep the switch in either position: 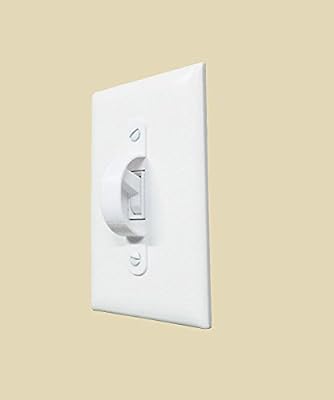 I’ve got Decora switches… But that’s a pretty solid idea. Ugly, but solid… 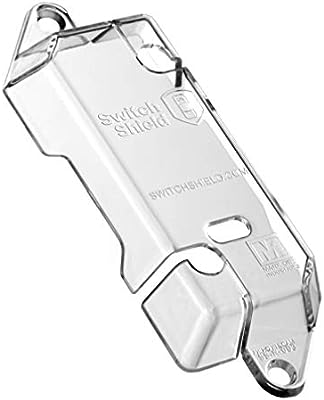 I was looking for a more elegant solution, ugh… Oh well… I only need the switches blocked long enough to break the habits… Clear packing tape it is for now…

I agree… they also make switch locks which screw into the plate screws and keep the switch in either position:

This is what I use. I just moved not too long ago and I have set up a couple of lights in the house with smart bulbs. I had to run neutrals to many switches in my house as it did not have them. But on some switches the smart bulbs worked well and were cheaper and easier than running new wire.

Even though I know not to turn off certain switches, I find myself reaching for them from time to time as I leave the room . These covers remind me not to.

There are many different styles of switch locks. This one is almost invisible: 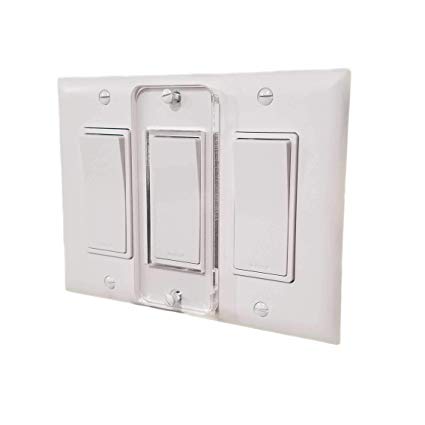 Your local Home Depot will probably have several choices.

Something like that would likely pass the “wife approved” test! Thanks!

My wife turns off the switch that controls the Hue lights in the upstairs bathroom. Does this virtually every night.
Then she asks why the nice motion-based night light arrangement I did with them does not work. lol

Like this: Turn on/off smart light bulb when physically off?

Like this: Turn on/off smart light bulb when physically off?

Sort of the same idea as the clear packing tape, but boy does that make me happy I have Decora switches!

I put some clear cellotape over the switch button, and its 95% invisible to the eye. I like this solution because sometimes i need to reset some of my bulbs, so i need to be able to turn the switches off and on. Forget my wife, a few times I have tried to turn switches off, just did it about 30 mins back lol

It doesn’t have to be much just a little tiny bit of resistance where it should move freely usually should be enough of a mental cue to say whoops that’s not what I wanted to do.

Amazon sells switch covers for strict Jewish families (not supposed to operate machinery on the Sabbath). For some reason these keep popping up on my Facebook feed 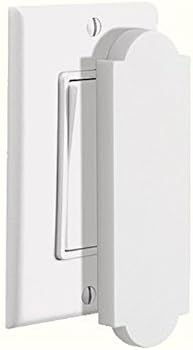 It's the perfect way to avoid the "Ooops... I accidentally shut the light on Shabbos!" Built-in magnet attaches to switch screws - no need for tools or electrical shorts.

Paintings. I have been using things like paintings, hanging planTs and even Floating shelves with ornaments that mark it. House looks much nicer and the lights are available when I need. It alp makes a person who is residing at the house remember not to switch them off

You could set up an automation to turn on those that should be on with a smart switch even if someone turns it off. … IMHO, the best way is to re-wire the box to make the circuits live full time and repurpose the switches (or remove them if not needed).

I have that with a couple of my smart plugs. But it’s a great thought for any circuit that has dimmable smart bulbs: a smart non-dimming switch that turns back on if it’s been turned off, followed within a few seconds by a command to turn off any smart bulb on that circuit. In fact, I think that’s my next development cycle.

It would accomplish the goal of the person turning off the switch: turn off the lights.
It would sidestep the problem associated with this. It’s a ‘system’ approach to a behavioral issue that really should not be considered a behavioral issue.

Well folks, the low budget, almost completely invisible solution to the problem was a simple piece of clear 3M packing tape that I already had at home (I do some Ebay stuff on the side).

What I did was simply clean the switch, and the wallplate off of any contaminants that might be exaggerated by the tape, with some lens cleaner alcohol wipes (had those too) and then applied the tape with a rubber squeegee, making sure there were no air bubbles as I went, or at least as sure as I could be…