I currently have setup some Hue lights all over the house along with some motion sensors. For example, on the stairs leading to the living room/kitchen, I have setup a motion sensor that turns on the lights as you approach the stairs.

I setup Smartthings to turn off the lights automatically after 20 min, but there are periods of time when someone is in the kitchen for more than 20 min. How can I setup the motion sensor and lights to turn off, to let’s say when I leave the living room/kitchen.

So that brings me to my question: how do I make use of all those sensors to turn off the lights in the living room when no one is in the room?

Brand and model of the motion sensors?

A few Iris Motion Sensors and a few Philips ones.

A few Iris Motion Sensors and a few Philips ones.

Are the Phillips motion sensors connected to the hue bridge, or connected directly to SmartThings?

OK, smartthings doesn’t have any way of controlling the Hue sensors which are connected to the hue bridge, so you just have to do whatever you can do within the hue app.

Hue offers the “Hue labs formulas” with some app options that are still in beta. They have a whole bunch of these for the motion sensor, some of which sound like they might fit some of your use cases. So you should definitely check those out.

At HueLabs you can try out new Philips Hue features and scenes for your Hue system. Check them out and let us know what you think! #Philips #Hue #HueLabs 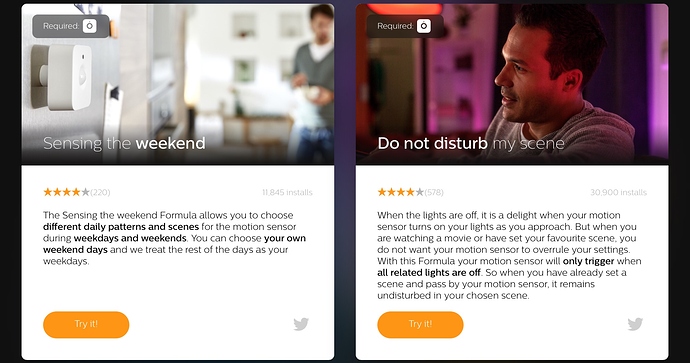 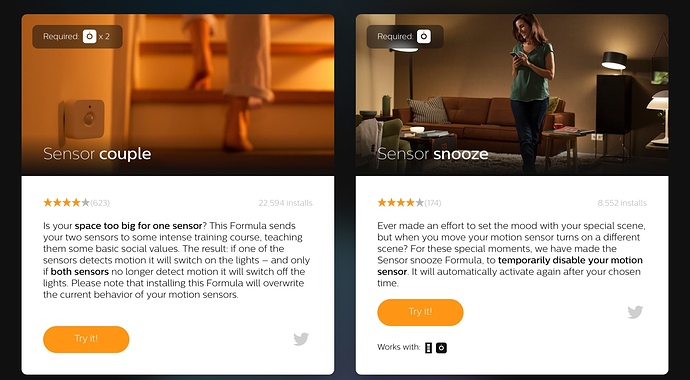 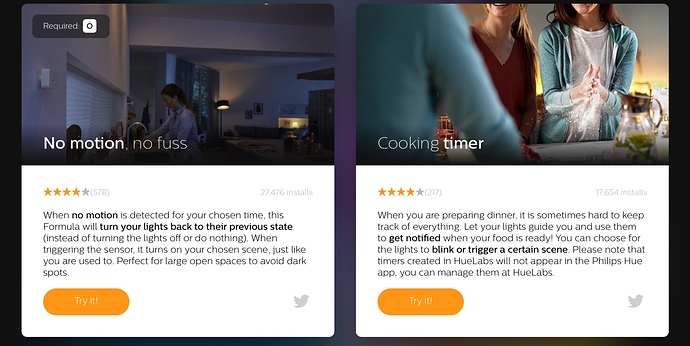 As far as the other sensors, you’ll be able to do much more complicated rules with those, just depending on how you want to set them up.

see the following ( this is a clickable link)

I was actually able to use a code found on this forum and connected the Hue sensors to ST, so they work that way also.

I was actually able to use a code found on this forum and connected the Hue sensors to ST, so they work that way also.

OK, if you have them controllable by SmartThings, then they fall into the same group is the other sensors. For some of these cases you’ve described, you will probably need webcore, it just depends on the details.

Ok, so I’ll look into webcore. I guess I’m struggling a bit with the use case and the scenario of turning them off.

When Motion Changes to Active
With Light1, Light2 …
Do
Turn On
Set Color/Leve
Wait X Minutes
Turn off

You might look at the rooms manager smart app by @bangali
I have found it much nicer than a collection of disconnected rules for managing my lighting automations.

![](upload://5BbAhma9lFbuNablm0YgohPwByI.png) Rooms Occupancy and Rooms Manager While ST has a concept of rooms it is essentially a grouping mechanism which does not enable personalized automation. In contrast rooms occupancy considers the room as a meta device and automates common tasks associated with a “room” physical or virtual. What makes it really useful is not just the room's occupancy state but the ability to manage automation for rooms in a set of rules for the room based on the occupancy state of the room and data from various sensors. When creating a room device through the smartapp you are able to create these rules for the rooms making your rooms really smart. What these rules enable is many common tasks around rooms which most users go through automating at some point. Us…