Help in "talking" about open door´s or windows

I want to know which windows / doors are open. So I create a virtual switch, that verify the open windows, but it doesnt work…

Why does´nt work, because the identified device is the music player…

I want that the piston announce all the open devices, but I dont know how to do it…

In your If argument, expand to select Save Matching Devices to and select the variable openwindow

For your Virtual Switch, it should be something like this:

Notice that the two “If” statements are under the first “Then” section
You could also use an Else with VS, turn off but I just rather do it like stated above.

I would just get rid of the VS and do a Piston something like this:

I had to do something similar but for 4 sets of blinds. This is the only way that I was able to get it to work. It required a little bit of work but it’s rock solid. 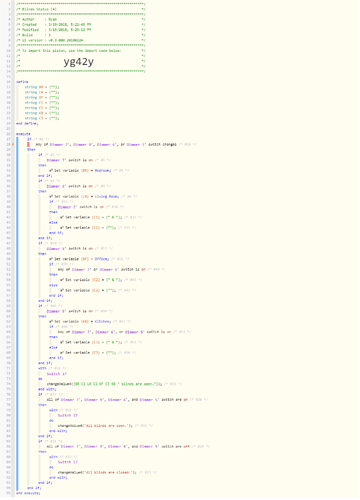 download.png1178×1632 180 KB
It would work just as well with spoken command. Just remember, the longer the list the longer it will take to run. You might want to group them by room. The connectors are there to add the "and"s in so it looks/sounds right.

Also, don’t make two “speak text” requests. It will start the first and then be interrupted by the second. You have to group everything into one. Use an expression like this:

Also, just FYI, when you call out “currenteventdivice”, that is actually your switch, not the windows.