Announcing Project Brillo, the operating system for the Internet of Things. D...

Announcing Project Brillo, the operating system for the Internet of Things. Derived from Android and able to run on devices with a minimal footprint. Co... - Google Developers - Google+ 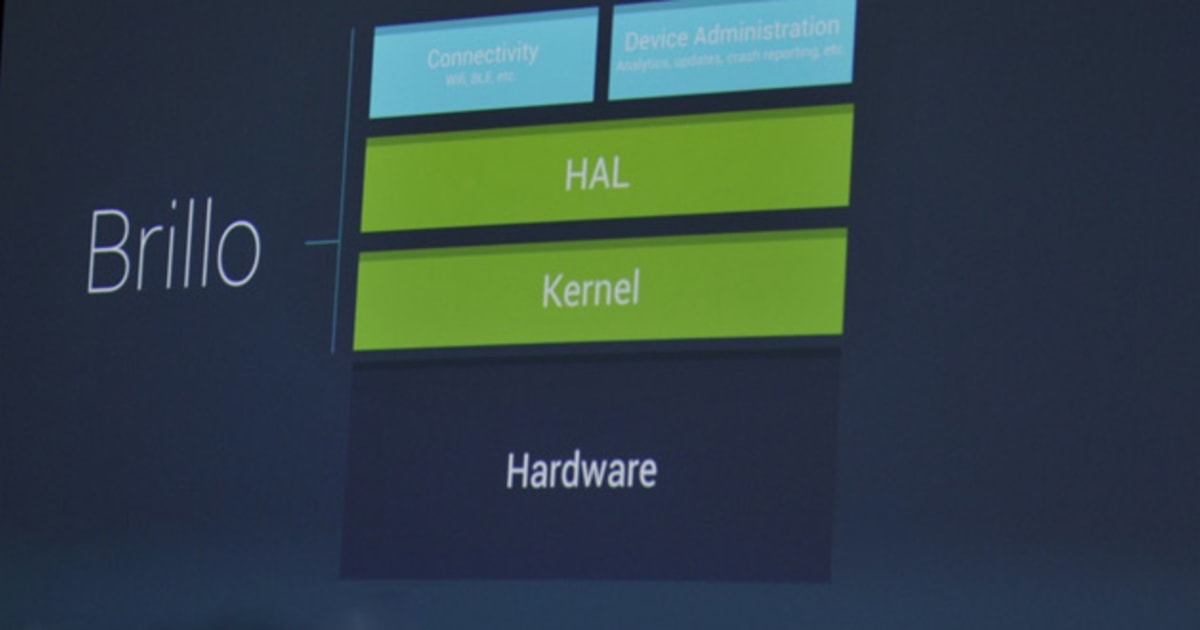 Project Brillo is Google's platform for the Internet of Things

Google wants to be everywhere in your home, not just hiding inside your thermostats and smoke alarms. That's why, as rumored, it's just announced Project Bril...

I saw that bit too. It appears that they want the phone to be the hub of your smart home, not sure how well that will work out. The glue for IoT is certainly a problem that still needs to be solved, but someone needs to start working on the user facing experience/intelligence behind the platform. Getting your phone to talk to a light bulb and then be able to turn it on and off is where the “high tech” is at right now.

The problem of: how to grab their piece of the IoT and Smart Home pie, of course!

That is, by summer 2016, HomeKit will be a mostly hubless IOS-only ecosystem for home automation. That will run on WiFi and Bluetooth in a bridge and tunnels tree topography. Voice control. The phone will run most stuff, some third party apps will provide a tablet UI. Apple TV will substitute for the phone when the homeowner is away. The ecosystem will include Philips bulbs, switches, a garage door opener, a couple of locks, and some HVAC. Maybe with zigbee sensors. Plus whatever other third party device manufacturers want to join in,

And Brillo will be a mostly hubless Android-only ecosystem for home automation. That will run on WiFi and Bluetooth in a bridge and tunnels tree topography. Voice control. The phone will run most stuff, some third party apps will provide a tablet UI. Not sure what will substitute for the phone when the homeowner is away, maybe a tablet. The ecosystem will include Philips bulbs, switches, a garage door opener, a couple of locks, and Nest. Maybe with zigbee sensors. Plus whatever other third party device manufacturers want to join in,

Hmmmm…seems pretty clear what the strategy is.

Hmmmm…seems pretty clear what the strategy is.

I understand the strategy… what problem are they solving? Nothing new. Same old stuff new name

From a consumer point of view, it’s the same unsolved problem: plug and play reliable easy to use DIY home automation under $3,000 that doesn’t require technical expertise and that offers instant update status, built-in voice control, and forced sequencing.

That problem is not yet solved by anyone, including SmartThings. But will be solved by several offerings soon, I think.

The phone will run most stuff, some third party apps will provide a tablet UI. Not sure what will substitute for the phone when the homeowner is away, maybe a tablet.

This is THE major obstacle for a friction free smart home. Voice integration on a phone or tablet is an easy first step. However, taking the easy road eliminates entire swaths of people from being able to have a smart home. My dad does not carry a smart phone nor does he use a tablet. Amazon echo has the best interface for someone like him at this point, but it is very beta and still in limited supply. The smart home that my dad needs is not the one I have seen offered by most companies. There are a lot of offerings that seem to come close if you squint while looking at them. Problems to solve.

Of course, I must say that what we know about Brillo so far, barely scratches the surface!

Of course, I must say that what we know about Brillo so far, barely scratches the surface!

Too many questions need to be answered first… First of which is… Does brillo/weave work without internet? I suspect… No

Currently neither does STs… but… thats being remedied.

I am so amazed by the Amazon Echo. The thing worked straight out of the box, super easy setup, great voice recognition that covers 9 rooms for us (basically 1,000 square feet), handles many different people’s voices and is pretty smart from a DWIM standpoint. We’ve shifted all our lighting control (.as opposed to schedule automation) over to it. Runs on WiFi 5 ghz. Has demoed perfectly every time I show it to someone (not true of any other system.) Now we just want it to do more stuff.

Echo is obviously not a full HA system (yet). But it’s setting a clear usability standard for consumer devices in that segment. The app still sucks, though. That’s why I am really curious to see what Apple’s Home app will look like.

Invisibility: If it seems obvious or cumbersome, people will not adopt smarthome technology. The tech should fade into the background, leaving the user with feeling that stuff just happens magically.

Amazon Echo automatically sends “cards” to the connected mobile App; which should eventually be the closest connected screen if necessary. Audio responses are well supplemented by visuals.

We see this in science fiction all the time. Reference “Extant” TV miniseries.

99% of home automation should be exactly that. If it’s automated, the only time you need an interface is when you are setting it up. The other 1% of the time when you want manual control, it needs to be easier to use than the alternative methods. Voice interaction is the ideal interface because even very small children can use it.

Now at Nest Developer session… And guess who’s on the presenting panel? @urman !

Nice to see to see a familiar face to connect with, right?

(I didn’t see SmartThings in the huge slide of icons of integrated vendors (not the above photo … a different slide), but … well, it was a huge slide, perhaps just missed it.)

But this page doesn’t include SmartThings in Works With Nest:

And guess who’s on the presenting panel? @urman !

But this page doesn’t include SmartThings in Works With Nest:

What this is trying to fix is having a functional smarthouse because thats where SmartThings falls majorly short. Locks unlock and lock on their own, presence sensors randomly “leave” and “arrive” at whatever times they feel like. I’ll be sitting on the couch and suddenly my 99% battery life presence sensor leaves and arrives multiple times. Doors report being “opened” at night and set off the alarm for no good reason. I’ve deleted and readded everything and the level of support from SmartThings has been terrible. Spent $1,000+ on a bunch of things that work 20% of the time.

I can’t be the only one?

Like when I go to bed and tell the house “Good night” it’ll only shut off 80% of the lights its set to. I’ll have to go into Things and turn the light on, then off, then on, then off and one of those times it’ll eventually actually response.

I know my internet and my router are fine, this is a ST issue and I’m hoping so hard that the V2 hub solves all my issues or else I’m going to feel like I flushed money down the drain. Hopefully all us poor V1 junkhub owners don’t have to pay like $200 for something that MIGHT fix all the issues.

Maybe with Brillo/Weave we can all have what SmartThings promised.

Edit: Sorry if I come off as upset, but its difficult to be upset when you spend so much money on something that doesn’t work as advertised.

Great to hear Amazon Echo is working so well. I have had my finger on the buy button more than once. I’m trying to wait for Apple’s WWDC15 in June and then Thread’s all hands meetings in July down in Texas. Your not helping!!

Hot damn it is great to see @urman at NEST. This just even peeks my interest more in Thread!! Keep up the good work Terry! @tgauchat

Wow man, definitely sucks when you spend money and something doesn’t work as expected. Truly sorry this has been your experience.

This is what I’ll say:

Have you worked with support and exhausted all options with them?

Have you done the due dilligance to make sure there isn’t a signal interference issue? (Moved the hub, repeater, managed WiFi frequency, etc.)

Will it have local processing? (My guess is no. STs will)

Do we want google knowing when our refrigerator is empty and selling that info to target so they can send us a cartwheel notification?

Will Weave have a community of third party devs that work for free to help fellow community members fix and solve their problems and write code from scratch to solve new use cases? Again… All for free to you at the expense of our time.

What if you have one of these use cases… How do you get it solved? With STs it’s simple… Come here ask Pat, Mike, me, or any of the other community devs, and we will do it for you.

I guess with Brillo you would have to write an entire android/iOS app?