So I have been doing a ton of research and I am down to choosing between the GE Zigbee dimmers and going with the Lutron Caseta (and bridge).

My question is… which is going to be the better long term investment? I know the GE operates in mesh mode and cane be firmware upgraded but I am not sure if the Caseta operate the same way? I have neutral wires available everywhere so the Caseta not requiring them is a non issue.

Zigbee devices sometimes have problems in fixed location setups, such as light switches, because WiFi can drown out zigbee. So the stronger you make your Wi-Fi signal, the more likely you are to lose your zigbee messages. This is probably the main reason why zigbee Has not been very popular for do it yourself residential light switches. It is used in commercial installations, including office buildings, but they tend to use a lot more devices per room and professional installers have tools to help locate and deal with potential interference which are not available with SmartThings.

Lutron uses its own proprietary protocol which is in a different frequency range and does not have these interference issues. It is not using a mesh, but it generally doesn’t need one.

In my own home, I use Lutron Caseta switches and zigbee sensors. I like both protocols, but Lutron is an engineering company focusing on lighting. They hold many patents and as an engineer, I just really like their devices. But Lutron doesn’t make standalone battery operated sensors, and I find zigbee is a very good match to that use case.

So there are certain people who are using zigbee light switches successfully, you Just need to be aware of the potential interference issue.

Interesting… never heard or seen of folks having issues with Zigbee and WiFi… I have a couple of those devices but most of my WiFi gear is on 5ghz so out of range.

So Lutron isn’t a mesh… does it have the ability to update firmware on the devices (not just the hub)?

Wi-Fi and zigbee interference has been discussed many times in this forum. See the FAQ (this is a clickable link)

Regarding Lutron, it’s a bridge, not a hub. And you have to have the Lutron SmartBridge ( or the smartbridge pro) in order to use the Lutron switches with smartthings, as the smartthings hub itself does not have a radio on the right frequency.

So any firmware updates are handled via the SmartBridge.

Just curious why you ruled out GE Zwave dimmers.

I have nothing against Zwave, I think it’s a viable option. I don’t currently have any Zwave devices so makes sense in my case to build out into the mesh I already have. I am not too worried about WiFi interference as I haven’t experienced it. Interestingly there are plenty of devices that live on the Zwave band too (wireless phones, baby monitors, irrigation systems etc). Point being no band is interference free these days.

Zigbee is included in the Amazon Echo Plus and the GE Zigbee dimmers are directly supported. I do like that.

Having said all that it’s hard to ignore how positively folks review the Lutron Caseta system. It’s very nice and appears to integrate very cleanly, I might pick up the starter kit and play with it.

If your current ZigBee mesh is stable then I would rule out adding more ZigBee for the sake of adding it. As someone with 10+ GE Z-Wave dimmers and another 4 standard switches I’ll just mention the fact the GE ZigBee stuff seems to never go on sale and retails for $45+ while the Z-Wave equivalent goes on sale pretty regularly. I mention this because you said you’d be looking at buying 12 of them. Also if you don’t mind getting Z-Wave instead of Z-Wave Plus you can find some of the older switches still pretty cheap. I got 4 switches @ $19 each and 2 dimmers @ $21 each from Walmart on clearance.

That and it opens you up to more choices. With 12 Z-Wave switches/dimmers I’m sure your house would be fully covered and it wouldn’t interfer with the existing ZigBee mesh you already have. Some automation devices simply don’t come in a ZigBee version so having the choice might be a good thing.

EDIT: Not sure where you are located but WalMart might still have some in your area: https://slickdeals.net/f/10156108-walmart-clearance-on-home-automation-ge-smart-switches-plugs-sensor-ymmv-b-m . Just checked my area…no dimmers but still switches left at $19 each and motion sensors at $15 each. Trying to resist the urge to buy more…

My next house will definitely be Lutron Caseta Bridge plus. Yes, it’s expensive but it’s more manageable and reliability.

My #1 reason for caseta is device state updates without polling.

I have ~25 GE zwave+ switches and have been happy after using the updated handler. I’m sure the Caseta stuff works great but I find the switches terribly unattractive and busy.

I also have gone with GE Z-Wave switches. I would have never considered Zigbee for switches for the reason @JDRoberts has already mentioned. I find my Zigbee sensors can occasionally drop out and then re-established. It’s one thing for a sensor, a whole other issue for a switch.

For a completely different take, I really wanted to go w/Caseta, but aesthetics are important to me and I don’t want a mix of different switches that look and operate in dramatically different ways. Since there are no “dumb” Caseta switches, unless you are replacing every existing switch with Caseta, you will wind up with a mix of different looking switches. I finally decided to go w/Leviton so all my switches will look and operate (manually) the same way. Of course if the look isn’t as important to you then this isn’t a consideration.

Different things work for different people, and aesthetics are an important part of the decision. As long as you end up with something that works for you, that’s what matters.

Funny you said that…it also was one of the reasons I went with the GE. Each place I put in a GE switch that had a “dumb” switch next to it got a Leviton paddle. They arn’t identical but close enough where it looks good together: 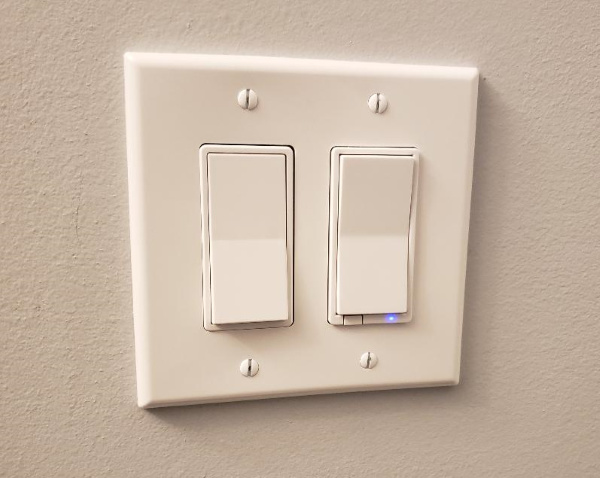 I see you also make sure that all the screws are vertical to match the aesthetics of the switches. Props to you, my OCD soulmate!

IF you have a horizontal plug instead of vertical, do you put the screws vertical… or horizontal?

how to occupy an OCDer

IF you have a horizontal plug instead of vertical, do you put the screws vertical… or horizontal?

how to occupy an OCDer

I use snap on plate to drive them crazy

I went with Caseta switches with the bridge over the GE. One big thing to me is that the GE switches are “maximum Spec” in size. If your electrical box is a challenge, like some of mine were, there was no way to get the GE switch in there. I was pulling out small manual switches and there was simply not enough space for the wires, wirenuts and pass-through wiring plus the huge GE brick of a switch!. The Caseta switches are a lot smaller. And the bonus was, I didn’t even need to “wire” in the 3 and 4 way switches as they were all wireless. Plus, I was able to add a “gang” to a switch location by slapping a Pico on the sheetrock and upgrading to the next gang size switchplate. The standalone remotes are wonderful.

I also liked the telephone tech help. Easy to reach and they seem to be able to handle every question that you can throw at them.

After 6 months, they are “bulletproof”. No issues! Great integration with SmartThings and Alexa.