Easiest way to create a widget for an individual device?

i’m more than a little disappointed by the Smartthings widget on Android which just seems to link to the app unless i’m missing something?

i’m wondering if there’s an easy way to create a virtual button to toggle a Smartthings socket? Is there an easy way to have a widget with an on/off switch with status on android?

Just for clarity, SmartThings does allow you to create virtual devices, including buttons, but when you do they only show up on the things list inside the official SmartThings mobile app. What you are asking about is a “widget,” not a “virtual button” in smartthings terminology.

Anyway, the easiest way to create different widgets for an android phone is to use a combination of Tasker and sharptools, which is a third-party app specifically designed to link Tasker and smartthings. 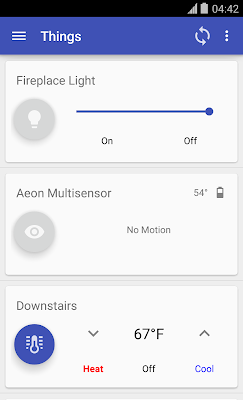 Both of these are paid apps, but they add a great deal of functionality for android users of SmartThings and are very popular.

The developer of sharptools, @joshua_lyon , is very active in this community, and I’m sure can answer any additional questions.

Is there a SmartThings Classic widget?

People do use the official widgets feature particularly for things like arming and disarming smart home monitor, or just for the “I’m back” routine. But not usually for individual devices because of the toggle issue.

thanks (as usual) for taking the time to reply. i already have tasker so i’ll take a look at sharptools. your help is very much appreciated.

this is the kind of thing that makes smartthings a hard sell unfortunately. my wife has taken to philips hue as there’s a simple widget that works consistently but to toggle a smarthings switch she either needs to install and configure 2 apps on her phone or fire up the smartthings app and jump through various screens to operate when she’d be quicker turning on the switch manually. sigh. apologies, end of rant.

I highly recommend Sharp Tools - I have a whole screen of widgets setup on my phone and use them all the time, rather than going into SmartThings.

Is there an easy way to have a widget with an on/off switch with status on android?

Anyway, the easiest way to create different widgets for an android phone is to use a combination of Tasker and sharptools, which is a third-party app specifically designed to link Tasker and smartthings.

It looks like @JDRoberts has you covered – just one minor clarification that if you just want to use the widgets feature of SharpTools you don’t need Tasker. So for your wife, she could use the SharpTools widgets standalone… and since you already have Tasker, you might enjoy some of the extra Tasker integrations that SharpTools provides! (Widgets and Tasker are each their own in app purchase depending on which you want)

When adding your new widget with SharpTools, make sure to select the Yellow/Gray widget as that’s the one that displays state. The Blue widget is technically a shortcut which has it’s own benefits like being able to group shortcuts together in folders and act more like a normal app shortcut, but it doesn’t display state like the Yellow/Gray widget does.

Thanks very much for your response - I’d actually managed to find the buttons when I purchased the widget add-on for sharptools last night so my wife now has her button.

I’ve been adding the ‘shortcut’ blue widgets because that’s all that I have - I can’t see any mention of the stateful yellow ones. My only option is under Widgets and then Shortcuts on my Android 6.01 phone - there is nothing under the Widgets where I’d normally expect so see widgets.

My only option is under Widgets and then Shortcuts on my Android 6.01 phone - there is nothing under the Widgets where I’d normally expect so see widgets.

What kind of phone do you have and are you using the stock launcher or a custom one? Feel free to PM or email me if you prefer.