It claims only incandescent compatibility but has a nuetral wire. I’m using an incandescent GE dimmer with some LEDs (about 25 of them totaling over 100w) and the non nuetral dimmer is causing excessive flickering which I’m worried will destroy the bulbs. It’s weird because I didn’t get any flickering when it was hooked up to a different circuit with 4 LEDs totaling 60w. Different brands though.

Anyway before I buy the 3002 aka 45607 can anyone confirm it works perfectly with LEDs and tell me the brand? The dimmer I’m looking at is used and would save me $17 and I just dropped a couple hundred on switches so I’m trying to save here if possible.

I can’t tell from your post if your circuit has a neutral wire or not, but I would expect if you are using a non-neutral dimmer you are not using a neutral. From what I understand and my experience, the flickering is caused by not using / having a neutral.

The 45607 is a now discontinued model which was really weird. It’s only rated for incandescents, but it does require a neutral wire. This was an evolutionary step for GE/Jasco as they were experimenting and was pretty quickly abandoned for a newer model which required a neutral wire but did work with LEDs.

These were strange switches to begin with. If possible, I’d just return it and get one of the newer models instead. The new ones start with a 12.

All of that said, if you mean you have 25 bulbs all on the same switch, you’re not going to be able to use any of the GE’s.

The thing about LEDs is that they don’t draw in the same way that incandescents do. There’s a surge when you first turn them on. The rule of thumb is to count that surge as 100 W even though the LED itself may only be rated at nine.

This is the reason why almost all switches show a higher rating for incandescence then for LEDs, typically half for the LEDs. So a switch that is rated at 600 W for incandescents is typically rated at 300 W for LEDs. That rating is a lie, what it’s really trying to do is protect the switch against the surge from an LED.

So the first thing to do is to check the draw, but not just the total draw– – you also have to consider the surge for each individual LED.

There is a neutral in the box. I was using the non neutral dimmer after moving around son switches and hoping I could place the non neutral somewhere with a high wattage so it wouldn’t sit in a drawer.

Basically what I want to find out is if the 3002 is equatable to a led compatible dimmer seeing as t has the neutral, but it’s just so old they didn’t market it for LEDs and CFLs.

Basically what I want to find out is if the 3002 is equatable to a led compatible dimmer seeing as t has the neutral, but it’s just so old they didn’t market it for LEDs and CFLs.

Unfortunately, no. They used the neutral to power the radio, but they didn’t change the type of current management for the light. That came in later models.

Switches designed for LEDs have to be able to handle the inrush current. The following passage is about sizing inverters, but the same applies to dimmer switches.

Inverter solutions for LED applications must take into account LED inrush current when sizing the inverter to the load. LED drivers often draw an initial ‘surge,’ or inrush, of power for operating the array. Depending on the number of LED fixtures on the load, their various inrush demands, and the load capacity of the emergency inverter, this initial load requirement could potentially exceed the inverter specifications, causing premature shut-down of the system. Installers of inverters can determine system size by using the inrush specifications as the maximum load requirements of the circuit.

I have several of the older style GE dimmers that do not require neutral wires. I’ve found them to be rather disappointing when controlling led bulbs. When I get to 81% or higher, the switch turns off. The is a slight hum and sometimes the flicker.

So, since I’m only using a few of them, I use then where an incandescent bulb is acceptable; in the closets and where I have chandeliers with those stupid little bulbs in them.

This one buzzes with led’s but otherwise it’s just the flicker at certain levels under maybe 50% dim. I’m actually using this on a chandelier with 25 bulbs. I went led and it took the power draw from 1000w down to 100w (97.5w real word). So there’s no way I’d go back to incandescent!

I’ve decided to just buy the newest version of the dimmer and not risk the 25 bulbs being damaged. It’s not worth it as they’d cost waaaay more than $15 to replace.

I’m just going to buy the newer one and not risk anything. It’s not worth the $15. I do however think you’re entirely wron about not be able to use any GE switch on a load with 25 bulbs (3.9w real world). Or theoretically more than 6 if I understood you correctly (6 any watt bulbs=600w “surge” and anything more is too much for the switch?)

I do however think you’re entirely wrong about not be able to use any GE switch on a load with 25 bulbs (3.9w real world).

It’s not me, it’s just physics. Like I said, the 100w is just a rule of thumb. But I’d think you’d get it least a 30w surge on each of the chandelier bulbs. 30x25 is 750 draw, and there aren’t any GE zwave switches rated that high for dimmable LEDs. There are some from other manufacturers.

Write and ask the manufacturer and see what they say. If they say you’re OK, go for it.

I think JDRoberts is correct, but this is something that can be measured if we want to know for sure.

I think JDRoberts is correct, but this is something that can be measured if we want to know for sure

Yep… Time to break the o-scope out of the closet!

So what exactly am I measuring? Peak watts? What setting do I use?

What are you using to measure it with?

So what exactly am I measuring? Peak watts? What setting do I use?

Easiest way is with a clamp on current meter. Then do the voltage x current = wattage. Depend on the meter. It could be tricky to set the trigger point for the current rush.

That’s all I have
An auto ranging multimeter

Oh my… You’re not find to get it with that. You’re talking about a surge that is going to last milliseconds. About the only way you’re going to get that is with an o-scope or a meter that had volts RMS.

If you had a high end fluke meter, you might be able to see the surge… Doubtful though.

Or, if you have one of those cheap 10 buck meters with the needle gauge…

All I have are volt meters and that’s the most advanced one I have. 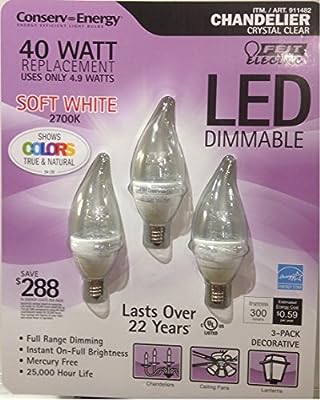 For Chandeliers, Ceiling Fans and Lanterns. The Candelabra Base LED is high performance and very energy efficient light bulb, which is direct replacements to incandescent light bulbs. They are RoHS co ...

Here’s how inrush is typically measured: