Let me just check I’ve got this right:

Two switches with 3 wires between them, no Neutral at the switch?

If so, Fibaro totally works with that.

A common problem with Home Automation devices is working out how to connect them up when matching your existing wiring configuration.  While the product manuals will almost always offer some simple wiring diagrams these are often difficult to follow...

Is the box that’s giving you trouble a master or an aux switch? If it’s the aux, you can probably use one of the travelers for the neutral. The aux only needs one traveler and the neutral. You should already have (at least) two wires for a standard 3-way.

Can confirm this as I’ve installed both (bridging the neutral connector) and only the dimmer works.

However, it will only work with halogen or incandescent bulbs, not LEDs.

Check model numbers carefully to make sure you are getting the one you want.

Transform any home into a smart home with the GE Z-Wave Plus Smart Lighting 1,000-Watt In-Wall Smart Dimmer Switch. This wireless dimmer switch allows you to wirelessly schedule, control and adjust the brightness of any hard-wired, dimmable halogen... 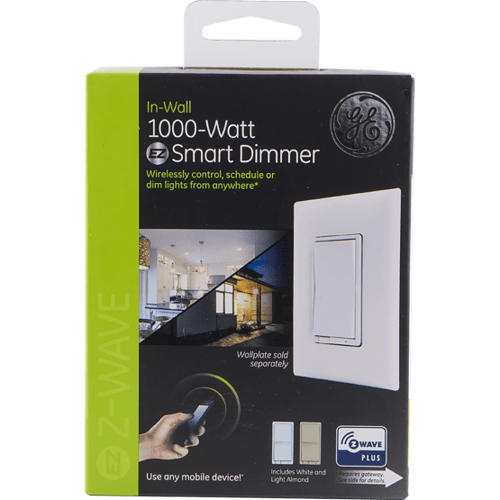 Leviton added a zigbee dimmer to their Lumina line which does not require a neutral. It’s intended for hotels, but is on the official “works with SmartThings” compatibility list. It can be quite difficult to find, so you will probably have to go to the wholesaler like Gordon electronics. Or home controls may be able to get it for you. The wholesalers should have it for between 85 and $100. If you do find it from a third-party on Amazon, it may cost double that.

Gordon had it when I checked today, but they may not always:

Note that Leviton makes a bunch of different models using the same plastic case, so check model numbers carefully is the features will differ, and only one does not require a neutral.

As of 2019 there are a number of new devices available, and a new FAQ.

If you are in the UK, the Lutron Caseta is not available.

As an alternative, most people would use one of the in wall micros such as the popular Fibaro Dimmer 2.

However, if you do you want an all in one switch, the second generation lightwave RF doesn’t have a direct integration with smartthings, but you can use the free IFTTT service as a “man in the middle.” This may add some additional lag, however.

Most people will set this up by using a virtual switch as the proxy for the lightwave RF switch in smartthings so that you can see the switch’s status in the smartthings app.

The second generation added two way status information, so that now you can trigger an IFTTT applet if someone turns on the switch at the wall, which you could not do with the first generation.

So again, most UK members will prefer one of the micro options which can integrate directly with smart things, but lightwave RF is another possibility, particularly if you also want HomeKit integration as well. choice is good.

I have looked at these nano dimmers online will they fit inside the standard gang box or is their some other wiring method to fit them? Are they easy to install?

I’ve installed mine in a standard gang box, my house has some shallow (25mm) back boxes (from the 1960’s) and these are a bit snug, but fit OK. In the newer part of the house the backboxes are slightly larger which makes it much easier.