I am brand new to ST so I may be missing something, but one thing I just can’t find is a simple table top controller like I had back in the old X10 days. It would just sit on a coffee table and allow me to turn 4 different lights one. I see some wireless options and that would be ok, but they all look so gody. I am under the impression that a simple table top controller does not exist for ST. Insteon has a nice looking wireless 4 thing/ scene switch, but I want to stay in ST and not need another hub.

Have you had a chance to look at the buttons FAQ? That lists most of the options. ( these are usually called “remotes” in a smartthings context, not “controllers,” by the way) ( this is a clickable link)

That post you’re replying to is four years old.

Since then, the only ST-compatible device similar to the insteon fanlinc that I’ve seen is sold at Home Depot under their Hampton Bay brand.

Are you referring to a GE z-wave switch? Or a module that’s installed in the fan canopy (like the fanlinc or Hampton Bay module)? I’m not aware of GE releasing such a device.

Not sure if this is what was being referred to, but this is a GE z-wave fan control in-wall switch. 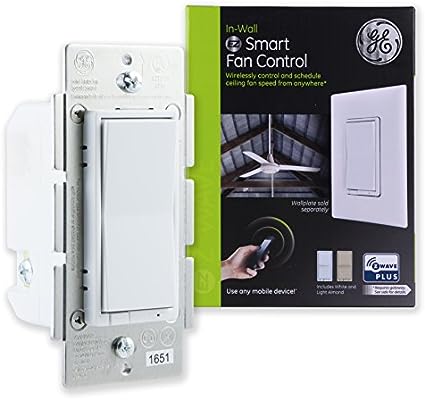 It only controls fan speed, apparently.

Not sure why we’re getting into four-year-old conversations again, but there is a current FAQ about options for fan control for anyone who’s interested ( this is a clickable link)

FYI Homeseer is clearing out their supply of the GE Fan controllers as of Oct.4th. $10 off or thereabouts.

FYI Homeseer is clearing out their supply of the GE Fan controllers as of Oct.4th. $10 off or thereabouts.

You should post that in the deals section of the forum, I’m sure a lot of people would be interested.

You mentioned the Lowe’s Irrigation controller; it wasn’t a “Lowe’s”, product, it was a re-branded z-wave device you could add to your network. Similar to the z-wave door lock I put on the front of my home. I had no problem moving my door controller to SmartThings. I wouldn’t have expected any problem in moving the irrigation conroller. (I am still thinking about installing one, but my wife is asking why? We don’t hardly use the irrigation controllers any more, anyway.)

Any ideas? The live view works great on Ring app. So I know it’s set up. Hmmm

Unfortunately, that model is not on the official compatibility list yet.

(I know I’ve said this before, but that’s because you’ve posted multiple duplicate posts throughout the forum.)

Since this is a very new model, hopefully more integration will be added in the future.

It’s a certified zwave lock, it should work with SmartThings unless there’s some S2 issue.

@rboy is an expert on locks and might know more.

Yeah it’ll work with this Enhanced Z-Wave Lock DTH (custom config params is on the BETA version, if you have access to RBoy Apps send our support desk an email to get the BETA version link), you’ll have to put the device into S0 pairing mode (it’s disabled by default).

I’m looking for a device that will install in a bathroom fan mounting box so I can control the fan separately from the light switch. Currently there is only one wire leaving the switch box and I don’t want to run a new wire to the fan. I’d like something that includes timer control.

I’m looking for a device that will install in a bathroom fan mounting box so I can control the fan separately from the light switch. Currently there is only one wire leaving the switch box and I don’t want to run a new wire to the fan. I’d like something that includes timer control.

Zooz has a zwave switch intended for exactly this purpose, but I don’t know if it matches your wiring. Why don’t you get in touch with their support and see if it would work for you:

Do It All    PRODUCT HIGHLIGHTS Z-Wave Plus Dimmer (up to 75 W LEDs and 250 W incandescent) and On/Off Relay in one The first Z-Wave double wall switch! Direct replacement for fan / light combo switches or other double switches in...

Thanks for your thoughts. The problem is that I now have one switch that sends a switched power line to the light. It then goes to the fan. I want to control the fan separately from the light, on a timer. So i need a wireless module that I will install in the fan box that turns the fan on and off. That module needs to be controlled by a switch not connected to the fan module with a wire, but RF or something.

The problem comes from the fact that some people think a single switch for the bathroom light and fan is ok. So they wire them from one switch. I think the fan should be controlled separately from the light. For example, I might want to turn the light off and have a timer leaving the fan on for 10 minutes. But there’s no wire to carry that signal, so I need a power on-off module at the fan that is controlled by a switch wirelessly.

There may be a way to do it, but that discussion would not belong in this thread.

Why don’t you start a new topic in Projects called “best way to control Bathroom fan separately from the light?“ and I’m sure lots of community members will be glad to brainstorm with you.