At present, Blink is not at fault for not wanting to integrate with SmartThings.
Currently SmartThings has put an indefinite hold on submissions for app(s) approvals and Integrations.

If you and everyone else want to voice your concerns on this topic, Please call Samsung SmartThings Hotline:

Did SmartThings tell you this or Blink?

@Tyler if possible, could you provide any input from the SmartThings side of things please?

I am on both forums Blink and SmartThings and see this issue talked about daily. So for the most part I am reposting the responces from Blink staff and my own observations on this issue.

I have seen from personal experiance that a camera on my deck which is under my overhang had bad sync module reseption and I moved sync module a few feet to keep it at the center of my house and bang both of my cameras placed outside received 4 bars of signal quality. And as fo my router, I upgraded the old FIOS router to their newest gateway and my wifi issues went out the window.

A place for Blink customers to rate the importance of various feature requests! Rate each feature, 0 being the lowest priority, and 4 being the highest! Keep in mind some of these features are currently being looked into, while others are not! This...

Update to my Solar Powered Blink Project.
Just purchased 2 of these Solar Panels to run my 2 Blink cameras already installed outside my house. Wish me luck that the panels are of desent quality. Will post an update when they are installed. 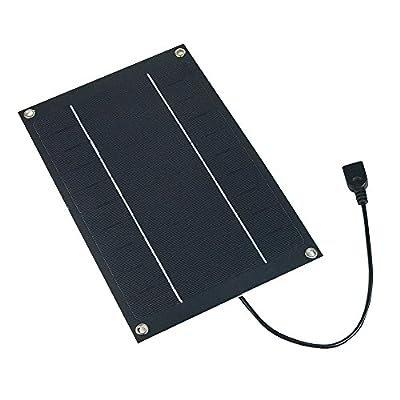 High Efficiency Miniature Solar Cell, can easily be arranged for larger load applications including higher voltage and current loads. Miniature compact size with solid attractive casing. With these so ...

How can Iid like to set up a notification from webcore that will send a push notification if my camera’s battery is below a certain threshold. Any idea how to accesss the device’s battery attribute?

Low Battery Notification with Customizable Alerts On request from many users we’ve built a high customizable low battery notification SmartApp with a built in dashboard. There are some of low battery notifications apps on the community but on request from folks we have custom built this app to include the following features: [PNG image (1)] [PNG image] [IMG_7213] [IMG_7212] KEY FEATURES Create an unlimited number of Battery Monitoring Rules/Groups on the fly (and delete them as well) Each group/rule has it’s own battery threshold and list of device to monitor Create custom names for each rule (optional) Dashboard showing status of device battery and highlighting those devices who’s batteries are below the configured threshold Set what time of the day and day of week you want the app t…

I am on both forums Blink and SmartThings and see this issue talked about daily. So for the most part I am reposting the responces from Blink staff and my own observations on this issue.

I have seen from personal experiance that a camera on my deck which is under my overhang had bad sync module reseption and I moved sync module a few feet to keep it at the center of my house and bang both of my cameras placed outside received 4 bars of signal quality. And as fo my router, I upgraded the old FIOS router to their newest gateway and my wifi issues went out the window.

I’m not sure what issue you’re talking about? I was referencing what you said here:

At present, Blink is not at fault for not wanting to integrate with SmartThings.

Currently SmartThings has put an indefinite hold on submissions for app(s) approvals and Integrations.

I’m pretty certain you got that from Blink, which is probably rubbish (I’m not blaming you here at all).

Last I heard, back in Feb Blink wanted ST to “just publish” something for them and they were directed to the partner portal where they could submit DTH/SAs for approval using the same process every other company uses, but nothing was heard. Keep in mind that it’s probably only submissions from the community that are put on hold and submissions for integrations from companies like Blink would be treated differently and considered however, given the attitude and lack of interest I’ve received and witnessed from Blink on this topic, I’m inclined to believe that Blink is telling you porkies.

My impression from hanging around the blink forum for a couple months now is that they might be moderately interested in ST integration, but it’s clearly not at the top of their priority list.

Their XT camera is intended for outdoor use but the PIR motion sensor is a disaster and they’ve been promising a firmware-based fix for a few months. And they have their own security solution that includes new hardware and a monthly monitoring plan ($$), no promised release date but they’ve said it should be out by end of the year. Presumably they’re devoting whatever resources they think they need to for that.

What issue have people been experiencing with the XT? For the most part (after some fine tuning of the sensitivity settings) they work just as I’d expect with only the occasional false alert.

Many people seem to be having issues with hypersensitivity. Honestly I’m not convinced it’s something they can “fix” with a firmware update, I think it’s just a limitation of PIR as a trigger for recording when located outdoors.

I found it pretty difficult to find the right sensitivity setting to prevent every passing car from setting it off while still triggering when a person walked up to my door. I mostly solved it by covering part of the PIR sensor with electrical tape.

There’s been some discussion on their forum about adding masking/zoning so that only the area the user wants will trigger motion. I think some of the responses there have unreasonable expectations about that considering it’s a battery powered camera. But supposedly that could be some part of the security solution they’re going to introduce with tiered pricing.

I posted this earlier on the WebCoRE forum and haven’t had any luck yet.
So I am trying to link a Blink camera to a virtual switch so that when the camera is armed or disarmed it will turn the virtual switch on or off. I am able to get the virtual switch to arm and disarm the Blink (monitorOn/monitorOff) just not the other way around. Any ideas?
The reason behind this is so that I can control it with Alexa while the wife can still use the Blink app on her phone and the virtual switch doesn’t fall out of sync.
Im not looking to just enable / disable motion. I am looking to arm / disarm.
…and yes I know about the Alexa skill for blink but it is far to awkward and troublesome.

Here is the list of the attributes I can choose from. I have tried monitorStatus, Switch, and enableStatus but none of these seem to work or even generate any logs on ST when triggered by the Blink app.

I have 8 Blinks and had problems with this as well. Here’s what I did. I created 2 Virtual Switches with Trend Setter (Cool Grouping App). Cameras (Inside) and Cameras (Outside)…Alexa responds to Inside or Outside Cameras as well! Trend Setter has...

Installed the smartapp and DTH and they are working well.
I have setup an automation in smartlighting where driveway lights come on when motion is detected on the blink camera.
However, there is a significant delay in when the lights come on after motion in front of the camera.
Is this because my cameras are set to record a 10 second clip and the motion trigger is not sent to turn on the lights until after the recording ends?
Is there a way to work around this without compromising the length of the recording so the lights come on as soon as motion is detected?
If not, this is a severe limitation because this application was the only reason for which I installed the smartapp and DTH!
Any help will be much appreciated.

Yes, motion detection notifications are sent after the recording is complete. Check out the first post FAQ’s for tips and tricks.

I’m planning on buying additional XTs, anybody has a coupon code to share

Sure, try this one.

Get $25 off your order at Blink

Great thanks it worked

I’d like to purchase some Blink XT cameras, preferably the 3 camera set.

Blinks website seems to have only the 1 camera and 2 camera sets in stock.

Would anybody here have any idea when they might be back in stock, or if they are available anywhere now?
I have tried to contact Blink to ask about availability, but have received no response.

They are out of stock at the moment on other packages as they recently had many sales. They will be back in stock at some point.