I have a quick question for the users that are leaving their mounted tablets on at all times or with motion detection through fully kiosk. Are you powering your tablets through a usb cable to a usb outlet? Or a regular wall outlet with a power adapter? And is your tablet always staying fully charged?

I have my iPad always on and my USB power is plugged into a Lowes Iris zigbee plug with energy reporting. The plug is turning on/off and duration depending on the time of the day because of the auto brightness option in the iPad setting which varies the power reporting.
Leaving the iPad permanently with 100% = bulge battery.

@Toasty I did try both USB ports on the outlet and there was no difference. This was happening with multiple tablets since I was testing a few to see which one I liked the best (7" Fire, 8" Fire and Insignia tablets). The tablets would sometime even lose battery when the screen was off. I finally got around to trying a different USB cable and it seems to now charge and hold well. I will continue to monitor to see if I have any more issues.

@Navat604 Thanks for the tip on the battery always being at 100%. I wouldn’t be able to fit one of those iris plug in my recessed outlet though. I could get a GE Z-wave outlet and have it turn on and off through various schedules. Issue with that is I don’t want use the USB power adapter since it sticks out too much and impacts the tablet placement. I wonder if anyone makes a Z-wave USB outlet.

I use these behind GFCI outlets in my exterior walls to control Christmas lights and the like. The boxes for these outlets are quite small and there is plenty room in there for this relay, the GFCI outlet, and an inline 10A fuse. I would definitely recommend them.

Thanks, I’ll look into it

Unfortunately, the Qubino devices were designed in Europe with European specs in mind. The single relay module will only support up to 10 A, which in most places in United States would be fine for controlling lighting, but not for controlling an outlet that you plug things into. Typically the outlet has to support at least 15 A, to allow for devices like vacuum cleaners and hairdryers.

I know the Qubino website says “ovens and washing machines,” but again, that’s based on European devices, which have much lower energy draw then US versions. They definitely would not match the specs on most US appliances of this type.

There are some high draw micros available in the US, most notably one from a Aeotec and a zigbee one from SmartenIT. Both can work well with SmartThings, but they are significantly larger than the Qubino devices.

Even if it is your intention to only plug in a tablet, it is likely that your local code will require that the Qubino not be used to control a plug-in outlet. This does vary somewhat from place to place if you can identify the controlled outlet as specifically for lower voltage devices, that just depends on local requirements.

@navat604 or one of the other electrical expert might be able to say more.

That’s what fuses are for. Manual calls out for a 10A fuse specifically. Not advocating to specifically ignore code in your area but it is perfectly safe with the fuse.

I use blue iris and cameras do show up in Fully Kiosk Browser that way.

Thanks, I just started with ST setup so one I finish probably would be a good idea to move the cameras to Blue Iris and stream from there. I saw one post over here talking about it, thanks

Hi,
I Just install Smarttiles,
does anyone know how do i change the Dashboard Background from black to cutome wallpaper?

SmartTiles? No longer available for installation.

Do you mean ActionTiles?

SmartTiles exists no more, it’s over, finished, deceased, dead, it’s passed, it’s gone over to the other side, it’s not with us anymore, it’s drawn it’s last breath, it’s just a memory, it’s obsolete, it’s time has been and gone.

The Qi wireless charger, does it get hot when charging? The one I purchased feels dangerously hot.

I’m a total noob here but how do you add custom css to this action dashboard?

ActionTiles currently does not support customized CSS override. This is a deprecated feature of SmartTiles, which will be replaced by various new customization options in ActionTiles.

So the only option (for now) is to use Firefox or similar and include an add-on that allows custom css injection?

It is an option, if you want to pursue it. It’s not something that’s definitely for everyone, nor do I recommend it.

The CSS Customization feature in SmartTiles was very much incidental and it significantly hindered the development of the app, as extra care was needed to insure backwards compatibility of the Custom CSS.

The current CSS of ActionTiles is subject to change without notice and any efforts on your part are most likely in vain. In fact, I’m rewriting portions of AT app at this moment.

Customization is one of the most requested features and it’s a high priority to us. We are actively working to make Custom CSS for ActionTiles happen, in a controlled and responsible manner.

Hi AllJetPilot, how can you integrating a google calendar (agenda view) to SmartTiles.

Yesterday I tested this DAKboard - A customizable display for your photos, calendar, news, weather and more! really nice view from my Google Calendar.

By the way I looking for one way to see my agenda and SmartTiles in the same device, appreciate any help.

Thanks for the tip. I have also been using dakboard as a good calendar display for a couple months. I combined it with some lessons learned in integrating online video camera feeds to achieve a basic dashboard. I still have to have two separate dashboard to have control of my house as well.

My implementation so far involves a custom website, which serves content from ActionTiles and google calendar within iFrames. 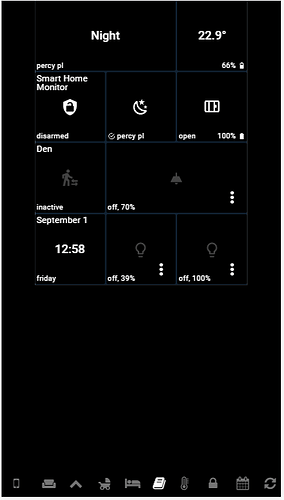 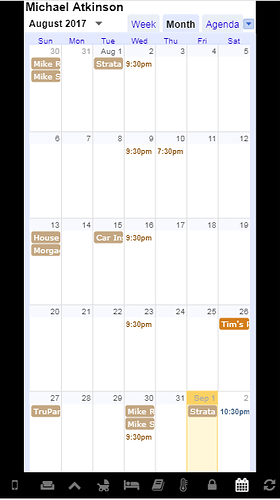 Its also pretty clunky, but I’m hoping to get my more custom dashboard working once I have time to teach myself how to serve information… 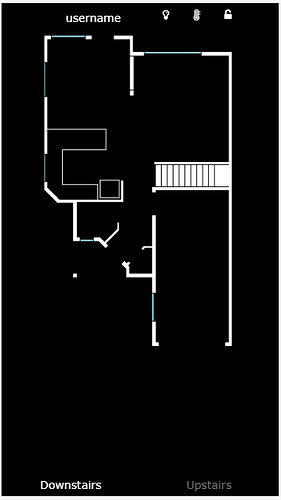