Running these sunset to sunrise with core Pistons.

The URL for the IFTTT link is working apparently because the piston fires based on the IFTTT maker event, but I never receive any variable. Ever.

Ok, I’m looking to replace my old RF garage door openers that I keep in my car, with a Smart Things Routine. I already have a working Smartthings garage door controller. So far I’ve only really used it to close if left open, but recently my car was broken into, and I realized that the garage door opener was a vulnerability. I know I can just open the smartthings app, go to the garage door and tap open, and then close later, but I want it to be easier than that, hopefully nearly as easy as the old button. Additional details. I don’t park in my garage, also I don’t always open the garage door, so I don’t want to automate it opening when I get home. Usually it’s once or twice a week, when coming home from shopping.

I like the idea of a routine because I can set that up as a widget on my iPhone (I also have an apple watch, so I could even use that if I was so inclined), so it would be a simple swipe down tap the widget, and the door would open. I actually just went through the routine and I can open with one routine, but would have to create a second routine to close the garage door. If that’s what I have to do, I could, but I still like the idea of a single routine if possible.

Any thoughts on the best way to accomplish this.

Any thoughts on the best way to accomplish this

Hi Paul,
I use life on my phones as my presence sensors. I had the same ordeal as you. This was my solution.

I created a virtual switch called grocery shipping. When that switch turns on it opens the garage door, when my presence sense arrives home. I use CoRE for this.

In life360 I selected locations, the grocery store and a couple of others, the places that when I come home I would want the garage door to open.

Using the life360 IFTTT channel, when I arrive at one of those places, the switch is turned on.

When I arrive home, the CoRE piston opens the garage door.

This also has prevented any random door openings.

I created a virtual momentary button that is linked to my garage door opener. Link the switch to IFTTT.

Whenever IFTTT gets a text, the button will turn on which will then open my garage door.

If your phone is synced to your car’s Bluetooth, then it’s all voice controlled with a push of a button on the steering wheel.

I have IFTTT saved as “headquarters” in my contacts. So all I do is push the button on the steering wheel and say “tell headquarters to open the garage.”

You can even say “tell headquarters to fu-- off” and that works too. I don’t use that one if anyone else is in the the car, but I find it amusing when I’m alone.

Trying to piece this together is getting the users nowhere.

There have been several disconnected threads on the method of showing how to get the URL of CoRE. They are scattered about and I will paste those below. But the nuts and bolts of how are hard to understand and follow.

How has SmartThings affected you? General Discussion

You can also use CoRE & IFTTT bidirectionally via the Maker channel - CoRE can trigger IFTTT events and IFTTT can perform CoRE actions. Not as nice as native integration into IFTTT, but works.

Turn off an outlet after a variable amount of time? Automation Ideas

@jwflutterby You may be able to do this with CoRE, version v0.1.10e and up. Can you have your Apple Watch application (the one you tap on) send an HTTPS request? If not, can you get that number of minutes you want to wait to an IFTTT recipe as an ingredient? If you can, then here’s what you can do: Install CoRE, see instructions here. Go to IFTTT and have a recipe send a Maker request to CoRE’s endpoint followed by /ifttt/poolFilter To find out the endpoint URL, enable OAuth for CoRE in the ST IDE and go to the dashboard (within the CoRE ST app), copy the URL for the dashboard, then replace the /dashboard… with /ifttt/poolFilter, like so: URL should look like this: https://graph.api.smartthings.com/api/token/0adfffff-cfff-4fff-8fff-9fffffffffff/smartapps/installations/e76fffff-efff-4…

CoRE - Get peer assistance here with setting up Pistons webCoRE

Open the dashboard in a web browser. Copy the url, removing the /dashboard end. At this point go to IFTTT’s Maker channel (action). You have two options: Use an IFTTT trigger - append /ifttt/[eventName] to the URI copied above and use that in Maker. POST request with JSON content type. Replace [eventName] with an expressionof your choice. You can add ingredients of the if event into the Maker request body, CoRE can import those into variables. In CoRE, create a piston and use a trigger for IFTTT capability. You will need to enter the same [eventName] you used above. If in expert mode, you can also choose to Import event data - this will bring data from IFTTT into CoRE. Use the URI copied above followed by /execute/[pistonName] where [pistonName] is the name of the piston. You may ha…

This setup will allow you to issue individual button press commands by voice from a Google Home device to multiple Harmony hubs. Example uses: “Hey Google, tell living room to pause” “Hey Google, tell master bedroom volume up 6 times” “Hey Google, tell living room left 3 times” “Hey Google, tell master bedroom to mute” There’s no support for launching or ending activities, didn’t see a need since it’s easy to turn them on or off already using either GH/SmartThings integration or GH/IFTTT/Harmony integration. Much credit goes to sushilks from GitHub, he developed the js utilities for Harmony, I just created a simple web server that accepts GET requests and calls certain functions in his harmony-hub-util app. Alexa/Echo users may want to check out his alexaHarmonyApp, it uses a custom …

Need some help on how to do something between DATES.
Pretty much all examples work with times…, which I can do just fine.

Let’s say I want to turn on a certain light between Jan 1 and January 31 of each year only.
Does anybody have some date examples they can post?

Thanks in advance
J

I am turning my home into an Airbnb. I have a zwave thermostat and want it to reduce the heating setpoint when there has been no motion on all of the 4 motion sensors I have throughout the home. I want my guests to be able to set the thermostat to a heating setpoint they like and have it still be at the same value when they come back.

So here is the logic I want to program:

Then when motion is sensed again, I’d simply do the same calculation but add 5 degrees in this case.

Any thoughts on how to do this?

Question about web requests: is there a way to make CoRE work with an HTTPS request? I’ve not been able to successfully make a GET request to a secure HTTPS site.

I’ve been able to do this thusly. I created a condition that first checks to see if it is between the hours of sunset and midnight. On that condition, I placed a date restriction of January.

It does, but not locally. Just web pages outside your hub’s network.

I’ve been asking this for days now with no results. Keep at them.

I realize a lot of the folks in the know are busy with webcore.

In part that is why I’m now asking about IFTTT as a workaround.

You can also setup a button to open it using a widget button on your iphone or Apple watch. The widget button can be accessed from the phone lock screen or 3D touch. This makes it a lot easier because you don’t have to open the app. 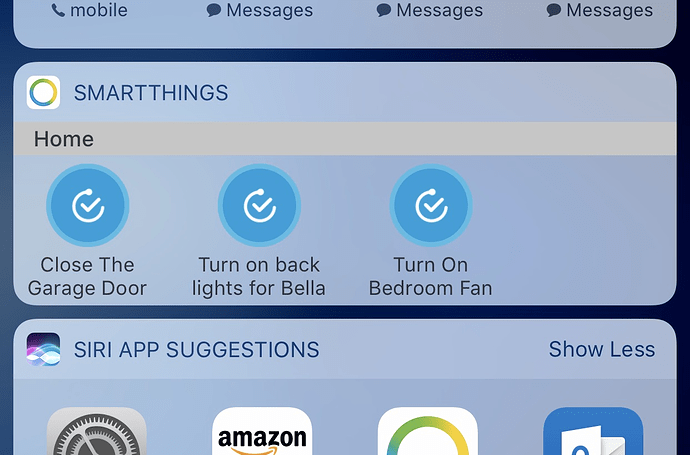 Yes, this is what I want to do, but I want one button that will “toggle” the garage door. If its closed, open it, if its open, close it.

Depending on what device you are using to control your garage door, you can set this up fairly easily.

what device you are using to control your garage door, you can set

I was thinking about a virtual switch, but the logic is evading me.

I definitely would prefer to be able to control it using the widgets on phone or watch. I would also prefer it to be a single button “Garage door” or something similar.

Problem with Routines is that there is only the ability to Open OR close the door. So if I did a virtual switch with CORE, its still similar as in , the Routine can either turn a switch on or off.

So if I did something like IF Switch is turned ON, toggle Garage door, that would work, either open or close the door, but then the switch is on. So if I run the routine again via the widget, it would not do anything. Maybe a momentary switch?

I’d prefer not to have to do an auto close after x minutes. Basically I’m looking to duplicate the dumb RF garage button. Press it the door opens, press it again, and it closes.

do this, set up the routine to toggle a switch on… this will open or close the garage door (depending on current state)when that switch is toggled on.

Then within CORE, setup a piston that says, IF switch X is on, then wait 10 seconds and then turn off…

you can run the routine to toggle your switch on when you push the button and CORE will automatically turn it off.

I just tested it and it works flawlessly.

Thanks, this helped. I ended up creating a “Momentary Button Tile” button. Labeled it Garage door opener. Used routine to turn on the switch. Used core to toggle the garage door when the “Garage door opener” switch is turned on. Works great so far in my couple of test runs, and saves me the step to wait 10 seconds and turn off.

If you have an open/close sensor attached to the door, add it in your conditions as a backup to make sure you’re not opening when you’re supposed to be closing (or the reverse).

I do have a sensor. What would the “backup” be used for? I’m using a “toggle” action for the garage door, so it opens if it is closed, or closes if it was open. So far the only issue I’ve had, is it seems like there must be a “safety” timer in the linear garage door control If I try to close it within one minute of opening, it ignores the command. I think I will probably never have that situation under normal circumstances, just during my testing.