Need help adding a delay before this Piston speaks as the Speaker is getting clipped so only part of the sentence is heard. Unless there is a way to modify the sentence to make it delayed in the beginning. Below is my Piston.

Any ideas would be helpful, the clipping is annoying. Is there a symbol that would not be read by the speak command that I can add in front of the sentence to gain a delay?

The cancel on piston state or condition change would basically cancel the tasks if the condition or piston state that originally scheduled them changes.

So in your case in the BUT IF section of the piston if it is between sunset and sunrise and the camera changes to active then your lights will turn up to 100% and then after 5 minutes they will go down to 20%.

Now if you do not want them to turn down because motion may still be active then you would cancel on piston state or condition change so this would not happen.

After re-reading the suggested piston it will need to be reworked in order work correctly with my suggested canceling. So when you get your Arlo give that a try. If it does not work as you want then come back in and we can work up a new suggestion.

@joelw135 Have you tried anything?

@joelw135 Have you tried anything?

I have tried to find a way to add the delay, but haven’t found a way. I would hate to build a whole new Piston. I was hoping there is some figures to add to the sentence that would be interpreted as a delay without being read. I tried !!! but it actually spoke that symbol.

Maybe try using periods or commas. I know I have seen this problem appear before. I want to say they solved it by adding something to the beginning like “Attention, Attention, whatever the message was”. So you might try that and then the clipping wont cut off important details.

Maybe try using periods or commas. I know I have seen this problem appear before. I want to say they solved it by adding something to the beginning like “Attention, Attention, whatever the message was”. So you might try that and then the clipping wont cut off important details.

OK I will give periods a try. It is really annoying. Thanks.

My wife often forgets to turn off our A/V receiver when she leaves the house or goes to bed for the night and I was wondering if there was someway to automate turning the receiver off, such as with a Goodnight routine or using our presence sensors (phone/fob). I am using the Yamaha Network Receiver smartapp and device handlers. Thanks!

OK I will give periods a try. It is really annoying. Thanks.

No periods don’t work, it doesn’t speak at all. Any more ideas this is frustrating.

Morning Lights Piston hasn’t worked all week.
I did a rebuild in Core, refreshed it in the IDE, resaved it… 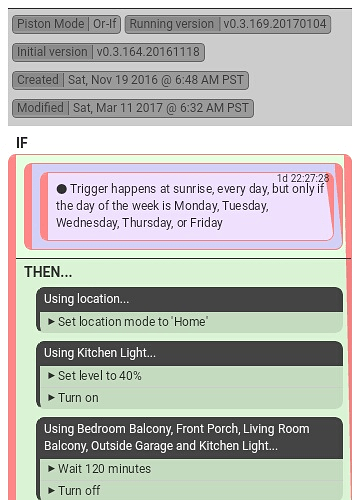 Thanks, I do have the My Contacts setup but don’t see in Core where I can push to just one device.

I apologize if this was already answered, I searched but there are a lot of posts

Can you push a notification to just one device? We have 3 phones on my hub but I only want to push to mine. Text messages are just too delayed.
Thanks,Scott

My Contacts - is it back?

This worked 100%, thank you!! @Rigi03 use the method @Toy4Rick suggests. Go to your IDE and select My Locations from the top left then select your account name. The thing that took me a minute to figure out is to leave the string of code at the end and ONLY change account/show to contact which you’ll see I have highlighted in blue and leave whatever the code which i have represented in purple

[image] EDIT: I screen shot the wrong address, should be account/show, see my new here.

Please confirm. Do you mean a space or spaces. Or commas or both?

A space and then a comma, see if that works.

Edit, i looked at one of my pistons and I see that I had added a wait of 1 sec before the actual speak and resume task.

OK the space and comma seems to work. But time will tell as delays are common with Wifi speakers. Thanks.

Thanks for the response anyway

I have managed to get it(Fibaro Dimmer 2) working by turning on expert mode in CoRE and now I have created a piston that is looking for a Scene number, and then acting on that.

Now is my next challenge - when I create logic such as

I then have a simlar logic for turning it off.

I have two issues here now:

Any help would be greatly appreciated.

Thanks, I do have the My Contacts setup but don’t see in Core where I can push to just one device.

You should see an option titled “Send notification to contacts” Then you will have the option to send via text or push and to which contact.

Wow!! How did I not see that…thanks!

I’m still pretty new and trying to figure out how to set up a piston to turn a light on randomly x number of times in a week. So, I’d have it turn on 3 random days throughout the week. Any help on how to do that?

Would it be possible to add another “Then” before or right after the push? I would like to use my VCL Player speech synthesizer to speak something like “Your mail has arrived”. When I tried entering it from the first page it ended up after the last command. "Set boolean variable (mailDelay) = FalseThanks.

@joelw135 at this point you can’t easily change the order of operations. You would have to go in and change the first task to you speech and then continue changing everything to what it was above.

I have a piston to control my exterior lights. Nothing to crazy just want lights to come on at night if the garage door opens or someone arrives and turn off after 15-20 minutes (depending on the trigger that turned them on) or when the garage door closes. Eventually I want to add the ability to add “on” time using a double tap on the switch but not until I can get the basics working. I have deleted and rewritten the piston a couple of times and I always have issues with the Time conditions that compare to a variable causing the condition page to crash. If I save everything and turn the lights on (which re-initializes the “OffTime” variable) then I can usually get back into the condition but that doesn’t always work either. I think my logic is solid but I get bizarre results (lights not turning off, turning on for no apparent reason, variables not getting updated when the action runs but later updating when nothing was triggered, etc.) Any help on what is going wrong here would be appreciated. The other thing I notice (not sure if it is related or even abnormal) is that in the dashboard the time comparisons tend to display as black not the normal red or blue but I do occasionally see them turn colors. Here is the piston:

@nuttytree
I believe you are facing the same problem a lot of people in this thread face and that is having multiple triggers (full dots) within your statement. These are conflicting with each other and most likely the reason you can not achieve you desired results. I would try changing all your triggers to conditions. See if that works on the overall piston. If not then start from scratch (I know how crappy it is) and build the piston in steps. Start with one section at a time. When it works. Add in the next.

I have a piston to turn off my kitchen lights if there is no motion for 5 mins and the light has been on for 5 mins. But the light doesn’t turn off after 5 mins.
…

@sapstar
Like above your two triggers are conflicting with each other. Remove one and change the other to stays inactive for 5 minutes. You can add in other conditions (empty dots) like the light is on. Just only have 1 trigger.

Follow up to this issue. It didn’t make sense to me that I couldn’t have multiple triggers in the rule as long as I didn’t AND them together (I understand why multiple triggers can be an issue). I looked at some of my other Pistons and as I thought I have several Pistons that have multiple triggers that work flawlessly. What I did determine after multiple rebuilds of the Piston, tinkering with the actual CoRE code, etc. is that there are a couple of bugs related to DateTime conditions. I am not very proficient in Groovy and I have been pretty busy so I don’t know exactly where the bugs are or have a suggested fix.

The first bug happens while building the rule, when defining actions that set a variable not only does it have a tendency to change the value of the variable (which shouldn’t happen in my mind) but at least for DateTime variables (not sure about other types) it tends to also change the type from DateTime to String which causes any condition screens using the variable to crash because it tries to evaluate the condition so it can show the current result and it can’t because it expects a DateTime and gets a String.

The second bug is somewhere in the code for running the Piston. If there are DateTime variables involved things start getting flaky. I tried both local and global variables but that didn’t seem to matter. For example this simple Piston never works right sometimes the variable gets set but the trigger to turn it off never happens and other times the variable never even gets set.:

So the end result is that I rewrote the Piston using counters instead of DateTime variables (which bugs me because the time trigger is always counting down and firing every minute regardless of the state of the light and tends to show as “Past Due” a lot). I know the simpler way to do this is to simply do a wait (which is how I have other Pistons controlling lights working) but as stated earlier I want to be able to add “on” time using a double tap and if the light is already set to be on for a longer time I don’t want one of the triggers (garage door or presence) resetting it back to a shorter time. So here is my new Piston that has been working perfectly for about a week: 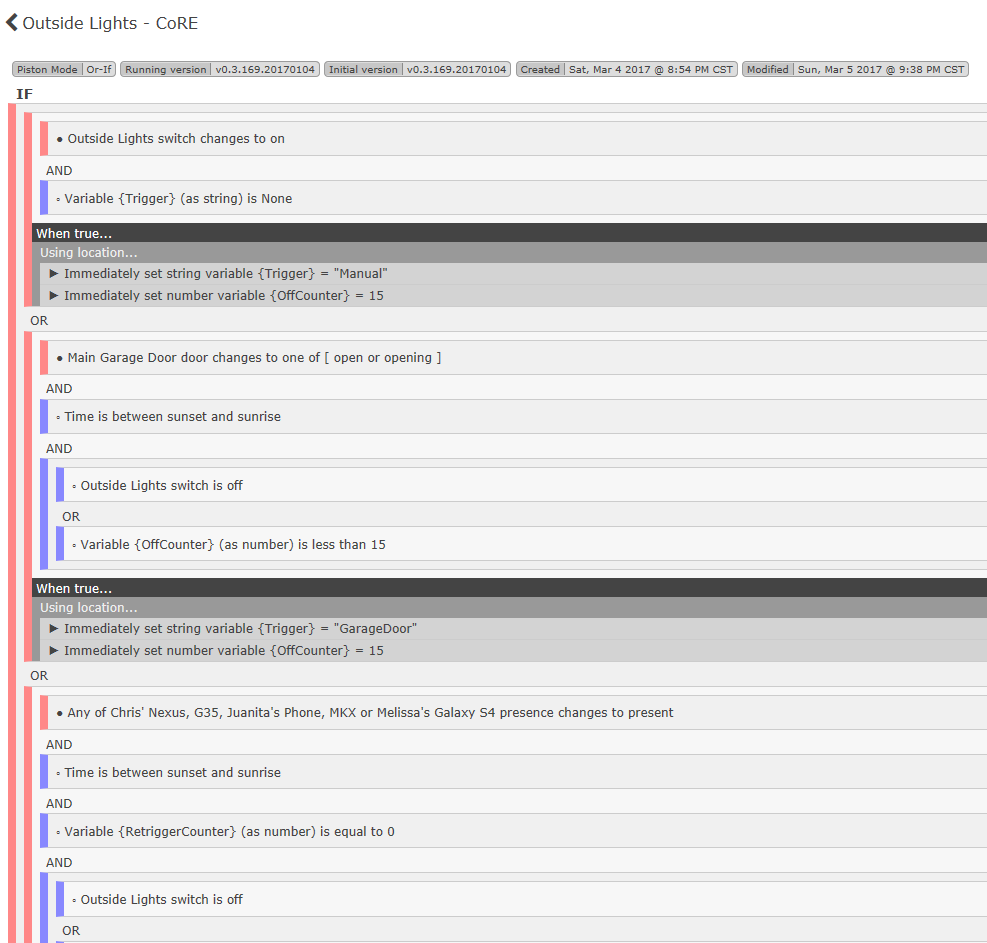 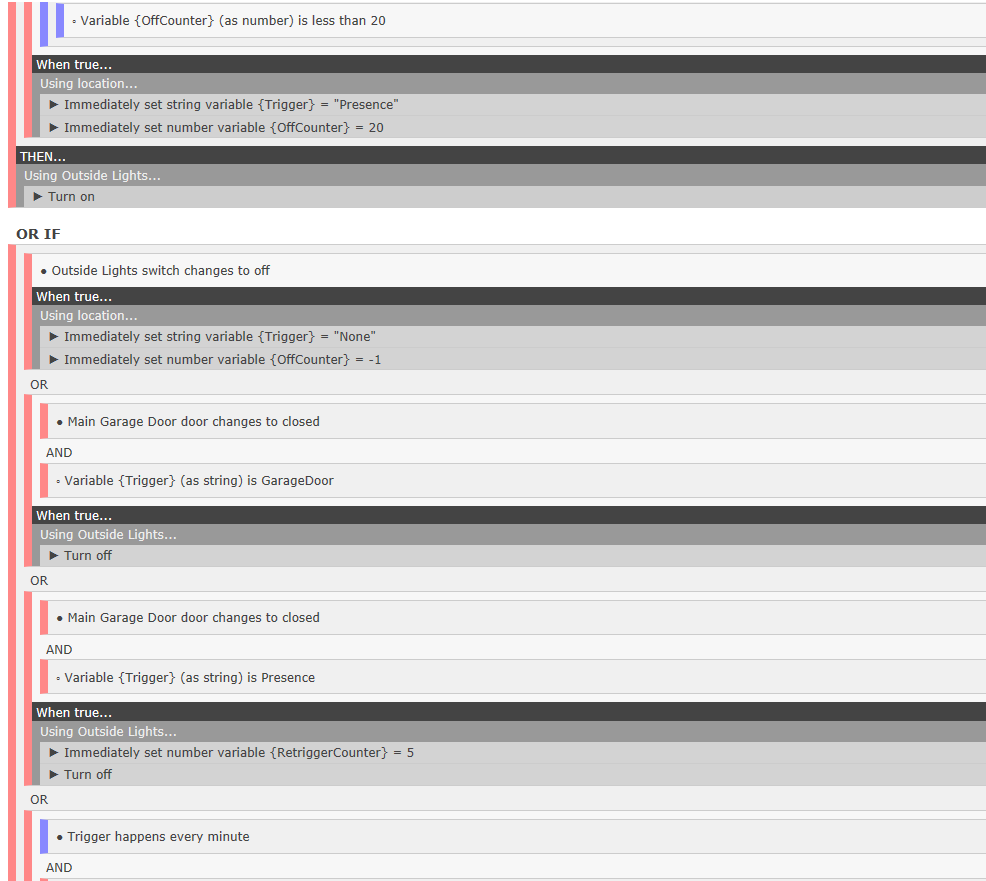 Can the receiver accept commands over the network?

Yes, it is a Yamaha Receiver and I used this SmartApp. I think I figured out the logic of what I am trying to as part of a larger overall “Away” scheme. Does this look good? Thanks

Then: Set Location Mode to Away, Set Nest Upstairs and Downstairs to Eco and Using Yamaha Main Zone Turn Off.