Trying to replace the “Gentle Wake Up” app with a piston. Piston and log entries below. The final color is supposed to be “Warm White”. Any idea why this comes on, but never changes from the initial color?

I’m having the exact same problem with my blooms today. They turn on but absolutely will not change colors.

Here is a sample piston that does very close to what you want. I don’t do the fade-up or fade-down because my switches do that automatically. I have similar piston for my outdoor lights on arrival after sunset. The reason I like this way is if someone changes the lights, switch/level, it returns them to what they were before I arrived. 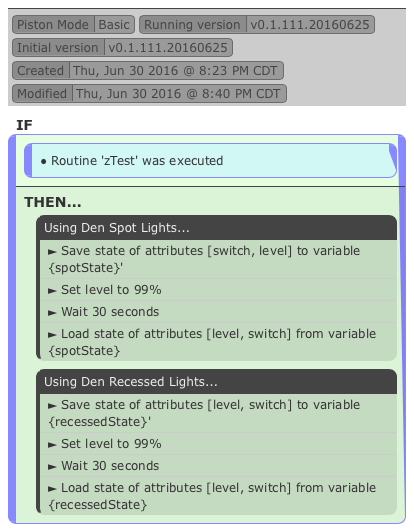 Fair warning - I’m just getting started with CoRE. I originally posted this question back in October, but CoRE didn’t exist then. I brought it back up this afternoon and CoRE was a suggested possible solution. I looked into it tonight and either I’m missing something or it’s not possible. I’ll try and explain it as simply and yet as detailed as possible.

My kids ask every day what to wear. They also love talking to Alexa and Ubi, so if I can leverage my house to do this for me, I’m all for it. Here’s how I see this working:

Like I said, the biggest issue I have at the moment is bringing in a forecast and not a current condition. This may be too complicated or beyond the capabilities of CoRE, which I freely admit may be the case. If anyone can help me, I would be greatly appreciative! Thank you!

First thing that comes to mind is use the web request feature of CoRE, I have no experience with it yet so maybe someone more qualified can give you more tips. You can request the 5 day forecast from openweathermap.org or from other free sources. At first glance, openweathermap is capable of returning data in json format that CoRE then converts into variables.

Thank you his worked out perfect

Maybe this would help?

Is there a high temperature weather forecast tile?

@Pilotrose Forecast High / Low is not exposed by the default weather tile, but i had a slow day at work so check out ForecastHighLowTrigger.groovy. It awaits your Virtual Switch.

Hope the link works, if not it was a search for high temp.

Your problem will arise at 3.3. AskAlexa and CoRE do not have a synchronous bi-directional communication channel yet, which means CoRE cannot return data to AskAlexa during the same transaction, and AskAlexa won’t be able to make Alexa talk out of the blue…

Copy. I was looking through everything last night and didn’t see anything obvious to report back out to Alexa, so I had a funny feeling this would be an issue. Looks like I’ll switch my focus to an Alexa skill. Thanks all!

I may be able to work something out with @MichaelS

Always up for a challenge.

that is strange, you’re still battling that dashboard. Your pistons are working, right? Have you tried opening the dashboard URL on a computer or another tablet?

All of my pistons are working. I have tried opening it on multiple OS’s and devices. I only get a blank page.

I am wondering if something didn’t activate correctly because I attempted to enable oath and initialize the dash board when ST was having problems. (I wasn’t aware they were having problems until it’s too late)

I also see nothing in live logging as far as errors go.

I’m having the exact same problem with my blooms today. They turn on but absolutely will not change colors.

Not sure what you’re getting at, but if you’re implying that it might be a platform issue, I don’t think that’s it. Pretty sure mine is a problem with CoRE or my understanding of it.

The bulb in this case is a Hue unit, BTW.

It has been discussed before, I think, that set color has dual action changes color and level. Is your level or color most important to you, or both transitions are a must?

I don’t understand the question. You’re right of course that Set Color sets hue, level, and saturation. But it’s irrelevant in this case, I think. All that piston does is, first, set the initial conditions (level and color). That works just fine. Then I tell it to transition to Warm White over the course of a minute. That doesn’t work at all. It seems to me that it should.

I see, you’re right, it appears to be a bug, and you’re also right about the 60 seconds, at minimum it’s confusing that you are not warned that it cannot exceed 60s @ady624 do you need more logs? 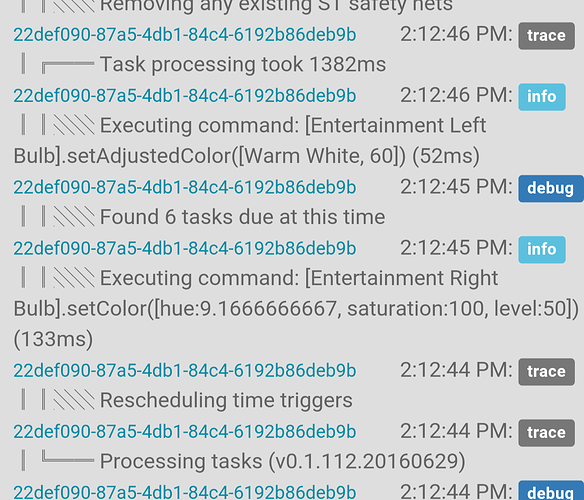 That’s a great idea! Have been testing something similar, but just gradually bring up the level, not the color.

I did get this working last night… 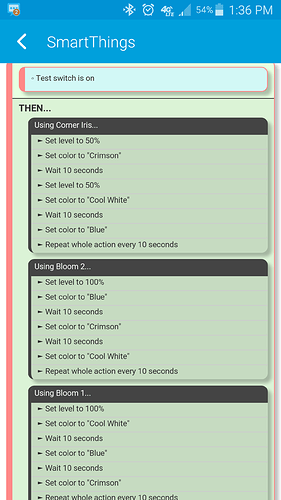 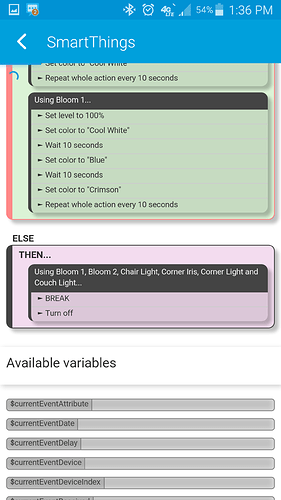 This works great. All of the lights change at the same time…

The only problem I’ve had is that the loop disdies not always break when the switch goes off. It takes several tries.