I am trying to control my Harmony Breeze ceiling fan using echo commands. The fan itself shares a hotwire for both the fans lighting and the fans fan. I can control these by giving them both power by switching on one smart switch. However this gives both the fan and the light power and what if I only want to turn on the fan while leaving the light off? As of now the only way I can do this is by holding the remote that came with the fan and hitting the corresponding light on off or fan on off button. Since all this remote is doing is firing an RF signal to the fan. I am wondering if I could buy some type of device that would connect to smartthings and fire these different signals to the fan via Amazon Echo voice commands. Or maybe I missed something and there is an easier way to do this.

i had similar issue. my ceiling fan had a light and both were on one switch. i wanted them on seperate smart switches. do you know if its a 14/3 running to the wall switch to the ceiling? if not then i can give you a detailed decription how

Well that’s the interesting part. I actually do have two wall switches that I could use and yes they I believe both have hot, common, and neutral wires. However the second wall switch does not do me any good as the fan itself does not have a wire for both the light and the fan, it only has one wire that does both. I hope this makes sense. So at this point I have bypassed the second wall switch, it does nothing. Then I wired one smart switch to the fan. Now I can give the fan power but to turn on the fan and light independently I have to use the remote. Does this make sense?

I have the same scenario… 2 switches to control a fan and a light. One switch has the black hot wire and the other switch has a red hot wire. At the ceiling fan connection the red wire is capped off as there is nothing to connect it to on the fan. The black wire is connected to the fan. To toggle lights and fan I need to ensure the wall switch is on and then use the fans remote to get to the desired state.

@John_DellArciprete yes i would be shocked you do not have a blue(or diff color) wire from the fan that you can connect the red too.

hey all. get a new fan​:stuck_out_tongue_winking_eye:

. sure there isnt a diff color? if not Wire a Ceiling Fan, I will show you how to wire two types of ceiling fans. One with a light kit and one without a light kit.

def not true. just need to find it or ask a electriciab

That’s because the fan wire and light wire goes directly into that module. Without seeing it no idea if you can separate them, but I doubt it. As designed there is no reason to.

I’ve got a 50 year old fan in the garage - could not separate them at all - wired right into the motor connection. Just have to use the pull cord. But it WAS free.

I believe the short answer to the OP’s question is no, unless you are capable of soldering the contacts on your fan’s RF remote to an arduino, which can then integrate with ST via the Thingshield. 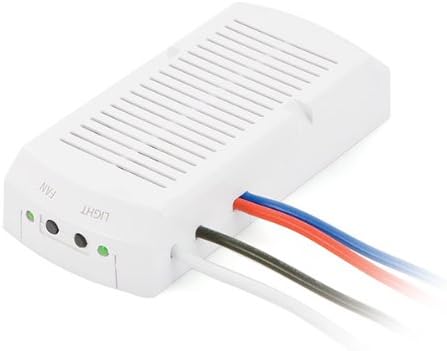 Note that this device only works with insteon, which ST doesn’t support. This device replaces the module in your fan canopy that takes the single hot wire and allows for separate control of the fan and light.

Recently Home Depot started selling a fan with a Zigbee-based module, but as far as I know, the control module isn’t sold separately, you have to buy the whole fan.

Okay, thanks for all the help here with this. It looks like I need to dissect my fan to see if I can separate these wires or look into some soldering. Either way I have my answer and I hope this thread is useful to others with the same situation. I will post back with any results should I get them.

@rangelsammon thats how it is. When the electrician who put the fans in the first time had no way to connect the fan switch he capped it off. When I double checked it a few months ago there is no free wire on the fan to connect it to. I also thought about somehow hacking apart the fan to get to the desired state and quit. I will go down that route when I replace the fans. One of them is 25 feet high and will require scaffolding to get to it.

This device converts RF to Wi-Fi, so you can control it with voice asst/smartphone: https://bondhome.io/, but it doesn’t support ST yet. They claim ST integration is coming soon…

This device converts RF to Wi-Fi, so you can control it with voice asst/smartphone: https://bondhome.io/, but it doesn’t support ST yet. They claim ST integration is coming soon…

@ernieg pointed out in another thread that bond now has an IFTTT channel, so you should be able to get some indirect integration that way.

Could happen next week, next year, or even never.

In the year since this thread was last active, it’s now possible to purchase a zigbee module for independent control of fan/lights with one hot wire going into the fan canopy, and there’s a community device handler that works fine.