I recently had to replace my bathroom fan, I had a standard bathroom fan with a light on a timer switch.

I replaced the bathroom fan with a HomeNetwerks Bluetooth Fan/Light (https://www.homewerksww.com/bluetooth-bath-fans/7130-02-bt) and was hoping to continue using my time switch to control the fan. Unfortunately I am unable to.

The new bathroom fan is controlled via RF to control the Light, Fan, Led and bluethooth. The switch the comes with the fan has 4 separate buttons to control each function.

I was wondering if it was possible to control the bathroom fan with smartthings since the fan is controlled by RF. Eventually, if smartthings has the integration I’d like to incorporate some kind of timer with a push button that would start a countdown to turn of the unit.

“RF” just means “radio frequency.” There are literally dozens of different protocols using many different frequencies and they can’t talk to each other. Bluetooth, Wi-Fi, zigbee, Z wave, Lutron clear connect, Ademco, and many more are all “RF.”

Unfortunately, at the present time smartthings does not support Bluetooth devices.

Since it can talk to its own app on an android tablet or phone, you might be able to install two third-party apps, Tasker and sharptools, and get integration that way, but you would have to have the android device within range of the fan at all times.

Otherwise I’m afraid you won’t be able to integrate it at the present time.

The following article in the community – created wiki discusses the network protocols that do work with SmartThings:

You can get an android box for cheapy cheap cheap on gearbest.com and use that to run your bluetooth connection to the fan, then use tasker and sharptools, and then hide it somewhere close to your bathroom.

As an aside, these pseudo-smart devices are actually really dumb. If they don’t follow an existing standard of control it just further fragments the smart home. :-/

Thanks, unfortunately if’s controlled via RF from the switch to the fan, not Bluetooth. It only has Bluetooth capability at the fan for pairing with audio device to play music.

Do you mean Infrared (IR)? (you need to point the remote straight at the fan?)

If it’s RF you might be able to use Bond. Contact them , should be a FCC ID number on it somewhere.

It appears to me after looking at the install info that only the Bluetooth functions (play, pause, prev, next) are via the RF remote. The functions of the fan and the light are controlled via a hardwired switch.


As you can see in the video, the controller is hardwired and the RF is only the music functions.
Edward_Niedziejko (Edward Niedziejko) March 6, 2018, 12:42am #8

I think it depends on your RF frequency but you can consider a broadlink RM pro which could control my lighting using RF, you need a device to bridge between ST and broadlink though

Hi, I made a device handler for Broadlink RM Pro which is using one of RM plugin, RM Bridge and Home Assistant. Because it doesn’t use a smartapp and you can input a device URI in PC, it may be easy to work. I wish it to help you. Thanks.

I guess you can order from Amazon and try it

You could also hack open the fan and replace the controller with a multi switch like this beastie: 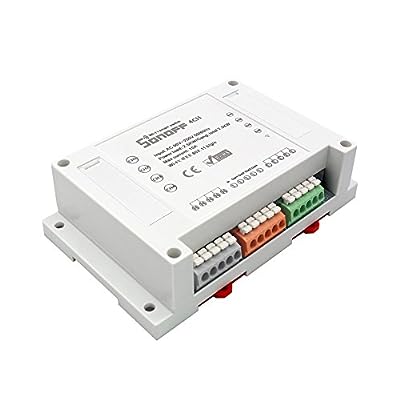 Sonoff 4CH is a 4-gang switch with din rail mounting. Sonoff 4CH 4 gang light switch supports to connect and control 4 electrical appliances, which can be turned on/off separately by the buttons or iO ...

Did you watch the video? No rf. But don’t believe me. Also, the links are dead to home depot so where are you buying it?
In fact, searching home depot for Homewerks or Home Werks comes up with zilch.

So the remote is IR And that controls just the Bluetooth. The toggle switch, has 4 buttons on it and each of the buttons communicate to the fan via RF. During initial setup you actually have to pair the hardwire switch to the fan but powering of on the switch multiple times until the fan actually sees the hardwire switch.

I did buy it at HD

For some reason the video shows an old switch. The updated switch is 4 buttons and a toggle on the bottom, no knob.

I know this is all getting pretty technical, but it does make a big difference when are you looking at integrations.

“IR” means “infrared“ and is not the same thing as “RF.“. “IR” is that little red dot on a lot of remotes and it has to point directly at the receiver. It won’t go through walls.

So a remote that uses Bluetooth is a “RF” remote on the Bluetooth frequency. A remote that uses “IR” is an infrared remote and doesn’t use radio at all. There are a number of remotes that can do both, including the Logitech Harmony hub, but it’s still two different functions.

I found this from the install manual, so I knew it had a wireless method of switching between functions. No data wire, no hardwired control.

JDRoberts, it’s a radio frequency control link for function, bluetooth for audio, and hardwired for power switch only.

If it has a handheld remote, look on the remote for the FCC license number. it may be inside the battery compartment.

The remote is hardwired, as per the image linked above. It communicates function to the fan via RF. As far as I can tell, there’s no wifi system, and the bluetooth connection is directly to the fan speakers, not the controls, so there’s no external control method incorporated.

If you really want to head down a rabbit hole, there’s a method for learning and controlling RF devices here, but it’s technical.

In this instructable, you will learn how to reverse engineer Radio Frequency (RF) remotes and how to implement in a very cheap WiFi enabled computer, the Node MCU. ...

OK, if it’s the same model, it’s using 433.92 and Broadlink Pro may be able to work with it as @nychan Suggested above. You still need an additional device as a bridge, and setup will be fairly complex, but it might be doable.