Hmmm… The room it will be protecting is absolutely heated, but given the transmission of cold through steel (albeit insulated steel) I may run into an issue. Plus, as @jensed pointed out the weather may get the best of the lock much quicker.

If the locks were cheap, that’d be one thing… But they’re not. They’re $150 on the low end, and I can get a substantial – and reliable – traditional lock for $50.

I guess I’m not sold, and I’ll just have to suck it up and look like a janitor carrying a few more keys for another couple years while they perfect the technology. Again, the last thing I want is a buggy door that could fail on me.

Hmm… Maybe Lockitron is the answer for you? Resided completely “inside” the house? Still going to be cold, but not as cold and because it’s a completely separate part from the deadbolt it’ll be less likely to be “contaminated” by outside moisture.

August is intriguing too, though like most new things I’ll squat on that idea for a while until they’ve proven themselves.

dipped to the single digits and below 0 on occasion

get on that Minnesota level bro, thats a brisk day in Minneapolis.

also @erkelbot there are locks that just have locking mechanisms and not motorized deadbolts. Like this guy.

Thanks. I’m looking for non-handle version if possible. It’s for a door that frankly won’t get used often for entry. I think – and perhaps this is just me – but handles beg to be tried – and give leverage to someone prying on the door. If I go with only a deadbolt I think it’s less inviting for money shines.

The way the handles work is they move a mechanism in place for the handle to actually turn the lock or not. If its locked you can move the handle up and down all you want, but it won’t move the lock.

get on that Minnesota level bro, thats a brisk day in Minneapolis.

Yeah but… we still get more snow than you do (usually). Lake effect can be fun!

Totally get that. I just prefer not having a handle at all on the outside for people to move ‘all they want’. Nothing says f*ck off like a simple keyed deabolt and a steel door…

Thanks. I’m looking for non-handle version if possible. It’s for a door that frankly won’t get used often for entry. I think – and perhaps this is just me – but handles beg to be tried – and give leverage to someone prying on the door. If I go with only a deadbolt I think it’s less inviting for money shines.

FWIW, most doors push in, not pull out. So a lever should provide much in the way of a pry location… I mean it does, but pulling on the lever is going the wrong way for the would be ne’er-do-well.

Let me ask you this: If this is a rarely used door, does the lock need to be usable on the outside? Could you in some way cover/insulate it on the outside part of it? I guess it might look really ugly doing that.

Yep, it opens inward. I suppose the handle can get in the way for someone wanting to pry with a bar, but I don’t think either option protects against a pry situation like that. Meaning, if they want in they get in…

I suppose I could fabricate something to cover over the keyhole and number pad, but doing that relies even more heavily on the proper operation of the lock via ST. That is to say, if that goes out…the door doesn’t operate at all from the outside.

I like the look of the Kevo (aside from the blue “I’d rather be out raving” ring). Simple, traditional-looking, but functional for remote access if need be. BUT, seeing as they get fairly poor reviews and are still stupidly expensive, I think I’ll just deadbolt it up in the traditional manner. Standard ought do it.

As @urman linked to, some locks don’t need the motor to turn the bolt. That one is my favorite.

I have a lock on my workshop that is battery powered (Kwikset) but doesn’t have the guts to connect to my smart things. I have had it for longer than I even knew about smart things by several years. I am now on my 4th year with it totally exposed and all is well. I don’t think it has ever frozen. This last year I ended up with a 3 foot snow drift in front of the door and it opened right up. The locks with the z-wave are basically the same as this one so I would not worry about it. I have seen my garage down to -10 and right now its about 130 in there and it opens right up still.

I had my Yale zigbee lock (control4) on my front door in Minneapolis this last winter, no problems with it functioning.

The electronics essentially are all on the inside, sans the touchscreen on the outside.

The lock / deadbolt itself was functioning fine even in sub -20 days. The door, not so much, but the lock had no problems.

The guts are all inside the house and I never had an issue. I do have a storm door outside of that - most certainly helped keep the lock a hair warmer - but really never had any concerns etc about it.

I also have a SmartThings Multi in my mailbox that notifies when the mail is here - and we had MANY -20 days this past winter and never once had an issue with the batteries actually. I would always get my push message when the mailbox was opened. (Granted it was a hair warmer by then - probably -10… but still - worked just fine in the chilly chilly winter.)

Found this older thread and thought I’d check back with folks on copy to see if anyone has found options for smart locks that fare better in colder climates since the OP back in 2014?

I have a Schlage FE599 lever lock and the first cold snap of the seasons (below 0) and the lock’s batteries drained to 8% almost instantly, even with a glass storm door. Fortunately I don’t have any guests locked out of the vacation rental it secures, but this is definitely something I cannot have happen again.

Any other, non-deadbolt-driving ST locks you all have seen that fare better in extreme cold temperatures?

I would think an electric strike would probably do better since you can run it off of Mains power and it’s usually the batteries that are the problem.

You’d have to add a separate keypad if you wanted one, but you could put that in a sheltered box if necessary. A lot of security systems in cold weather climates do that.

@rboy is an expert on locks, I don’t know if he has any observations one way or the other on specific smart lock models.

Otherwise @tgauchat @yvesracine or some of our other Canadian members may have some ideas.

Thanks @JDRoberts. Is suspect running the wiring needed to run the electric strike plate in this condo make implementation a non-starter, but I’ll keep that in the back pocket in case all other options fail.

And rboy’s RLA is exactly what I’m using for code management, but that’s not helpful if the lock burns the batteries and I get no notification of low batteries until they’re too low to operate anymore.

This particular lock also continues to fail in sending updates that a user code has been entered, which precludes my ability to leverage some of the more advanced functions of the RLA automations. Spent hours troubleshooting hub and outlet repeaters with no luck.

If I can find a solution to the cold weather issue I’ll probably keep this lock around for the season, but swap it out next year after a have a chance to test our some alternative locks with good battery life.

Thanks again for any/all suggestions from the community.

Have you tried lithium batteries? Their battery reporting isn’t as good because they will report 100% and then nose dive as they wear out but they last so much longer than alkaline. Believe they may withstand colder temperatures better too.

You can check out Yale locks also but the issue you’re facing has more to do with battery chemistry then the lock itself. You could try lithium 1.5V batteries which has a flat discharge curve and might survive lower temperatures better. 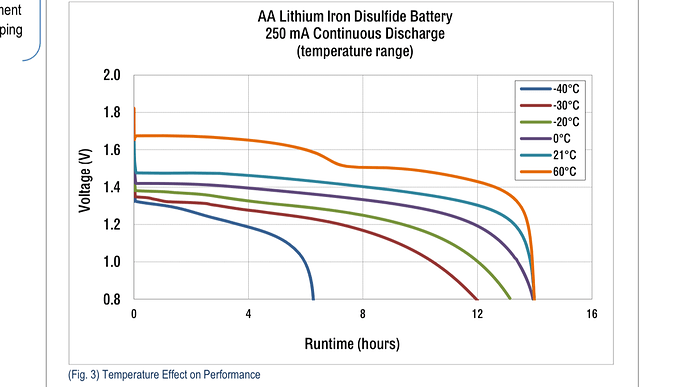 Plus the FE599 tends to shutdown sooner than Yale locks wrt battery voltage.

However do keep in mind that voltage characteristics of lithium

are different so you need to replace them at a higher remaining percentage than alkaline batteries. For example if you replace alkaline batteries at 30% then the same remaining “capacity” (ie energy) in a lithium battery may report 95%. The voltage curves are flatter and then very steep for lithium so while it will give you a longer battery life, don’t wait for it to get to 30%, it’ll be dead before you get there.