Capturing Motion and door multisensor sequence to turn a light on based on direction of travel?

I am a newbie and haven’t used the groovy programming I am currently trying to learn though. I want to know which way i’m coming to a door using the motion sensor and the door contact switch to turn on the porch light when i’m leaving. I used one of the sample programs to turn a light on with motion and tried to add the contact switch and add some IF AND logic but I was unsuccessful. In the example they used a motionhandler EVT I tried to alter the result of the motionhandler EVT if the door was closed but that didn’t work either.

Are you using WebCore? or Smart apps?
Mike

Let’s try this
open Smartthings
on the bottom tap automation
then Smart Lighting
If you do not have it installed tap Marketplace
then tap lights & Switches
first entry should be Smart Lighting tap it
then follow the in apps steps.
Which light select then tap done in rt corner
Then select trigger
You can use a motion sensor or if you tap open/ close
then tap the door sensor
you can add more options at this time
if done continue to tap Done Or Save in the rt corner till it is saved to smartthings.
Hope this will help you
I will say this some of the Smartthings apps do not work real well so you may want to look at WebCore.
Mike

Webcore is essentially a scripting language for SmartThings, it’s likely to be your best bet anytime you want a stacked conditional.

That said, from a network engineering point of view I feel obligated to point out that SmartThings primarily uses mesh networks, Z wave and Zigbee. These do not guarantee forced sequencing. Messages can and do bounce around the network a little bit before they are delivered to the hub, which means getting very precise timing for anything under one minute is often difficult.

It is entirely possible that you might walk past the motion sensor, then open the door, but the hub might receive the “door opened” message before receiving the “motion detected” message. So this particular technology is not really a good match for trying to determine direction based on which device fires first. You can try it using web core, but it won’t be guaranteed to work every time.

See, for example, the following discussion (this is a clickable link)

As @jh1 said, most people are doing this with a targeted motion sensor. That’s pretty straightforward. The reason is that you said when they break the beam at the top and when they break the beam at the bottom. You didn’t specifically say that you wanted to know what direction they were going in. However, given the use case you describe, I’m guessing that you actually did want direction. 1) option one: dual trip beams to determine direction Determining direction is not really a good match to mesh technologies like zwave and zigbee because the messages can bounce around the mesh for a while and there is no forced sequencing. For example if you have a contact sensor on a door and you open it and then shut it again very quickly, it’s entirely possible that the Hub received the “closed”…

So it’s not so much writing groovy that is the issue as the technology you are writing it for. Mesh networks are intended for tiny messages sent infrequently. Not for continuous command and control designs, which is usually what you are looking for when determining direction.

But you can certainly try it and see how it works for you.

Thanks but I don’t want motion or door open I want motion and door witch smart lights does not give you an AND option.

Thanks JD Good info. I will just have to have motion sensors on both sides of the door and use them to trigger the lights

@JDRoberts I’m curious if the best solution in this case might be to “trick” Zone Motion Manager into using the door contact sensor as a second motion sensor in a “Triggered Activation” scheme, instead of doing this completely with CoRE/WebCoRE.

To me, this seems simpler (and more re-usable) than building a multiple-sequenced-events time-window trigger in WebCoRE, but I’m not that familiar with building more complex patterns in WebCoRE.

I wish I could just extend the basic contact sensor DTH with a virtual motion capability, but then they would lose offline operation. Bah.

@JDRoberts I’m curious if the best solution in this case might be to “trick” Zone Motion Manager into using the door contact sensor as a second motion sensor in a “Triggered Activation” scheme, instead of doing this completely with CoRE/WebCoRE.

To me, this seems simpler (and more re-usable) than building a multiple-sequenced-events time-window trigger in WebCoRE, but I’m not that familiar with building more complex patterns in WebCoRE.

I wish I could just extend the basic contact sensor DTH with a virtual motion capability, but then they would lose offline operation. Bah.

This has got to be the sickest DTH ever… The uDTH Ever wished you could turn on a presence sensor with a switch?, or maybe take a lock command and send a motion event? Basically this bad boy accepts these commands: on off open close lock unlock and can turn them into these attribute states: open closed present not present active inactive The following capabilities are presented on the command side: switch door control garage door control lock The following devices are presented on the attribute side: Contact Motion Presence Door Acceleration Illuminance Smoke Water Sound You wire up an instance of this device to two separate apps, and off you go. Add to your repo, and select the device MikeMaxwell : uDTH the repo is owner: MikeMaxwell name: dth [image] [image] [image…

About two years ago, before Core or web core existed, I solved a somewhat similar problem at my own house by using two devices plus mode to identify whether I was arriving or leaving. But my devices included one presence device, so the approach was different than just A fires and then B.

Continuing the discussion from Smart Presence Sensor randomly "leaving" and "returning": Battery life is fine on my presence fob, but I still get random drop-offs with both the fob and the phone presence. Using an idea from @DigitalM0nkey , I am changing over the way I use presence sensing for all activities. I’m now using dual devices at the geo-fence barrier, as well as a virtual presence sensor for better continuous occupancy indication. Basically I’m trying both reduce the range and improve reliability by using two devices that will be recognized in sequence rather than both at the same time. So this is how it will work at my house now: Smartthings recognizes that my phone or the fob, mainly the fob , has entered the Geo fenced area. but nothing else happens yet. I do not tri…

The solution here is using a variable in webCoRE

So a lot is going to depend on the exact devices chosen, their “sleepy” settings, and their physical locations relative to each other and to any nearby repeaters. It may work, it may work most of the time, or it may just fail unpredictably depending on network traffic.

The option to use in either CoRE or webCoRE is the “followed by” grouping method (as opposed to and or or). This allows detection of sequences, so he could detect sequences both ways - webCoRE has much more comprehensive support for sequences, including max time between events in the sequence or detecting the lack of an event as a step in the sequence.

But mesh networks may interfere with the sequence if the two events are too close to each other. In practice, if there is at least 1s distance between the two events, the correct event order is presented in most cases.

Hi ady, I made a piston using followed by for 2 motion sensor to tell the direction of travel.
but there is a some problem.

Motion 1 and 7 is IN direction.
Motion 2 and 8 is out direction.

if IN and OUT motion is triggered within 30 seconds, it worked perfectly. on both direction.

but if only one motion is triggered, eg IN is triggered and stay triggered, and 30 seconds later, without any other motion triggered, it will execute the IN direction, vice versa.

so I think is the follow by problem,
please help, thank you 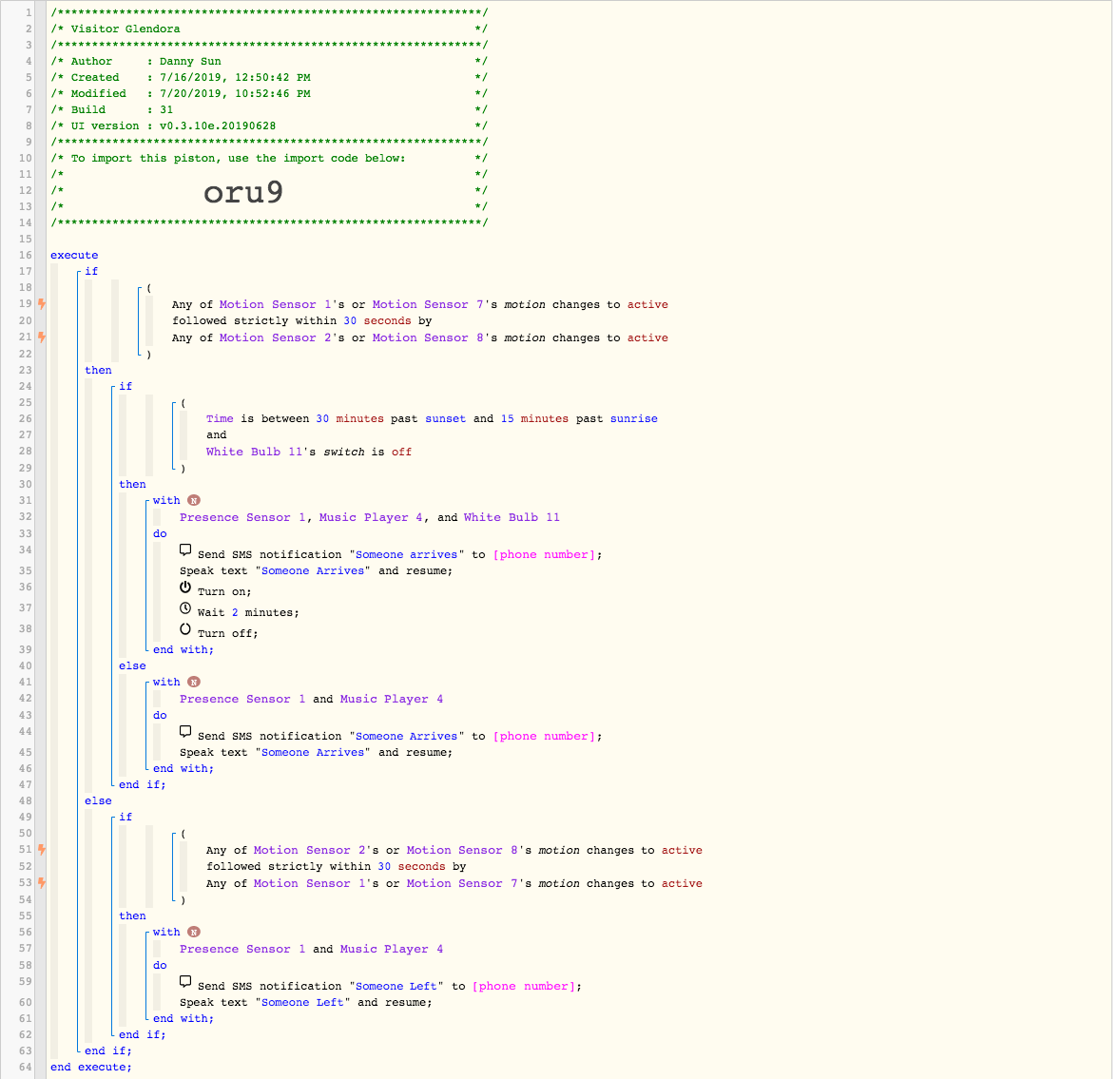 Here is the detail of the problem!

I almost gives up!! I made 2 identical Pistons, the only different is that I flipped the motion sensors one for arrival, one for leaving. first piston “Motion Driveway someone left” motion 8 changed to active, followed strictly by Motion 7...