I’m looking for suggestions on a reliable Z-wave or Zigbee ambient light sensor to automate most of the lights in my house.
At the moment, I have 5 x Fibaro motion sensor(different age), a Aeotec Multisensor 6, a Aqara motion sensor and a Dome(re-branded Neo Coolcam) motion sensor which all have ambient light sensor built in. The problem is, putting them next to each other, they all give different reading on lux level. I suspect as the cover on the motion sensor ages, the reading degrades.
So here I am, asking suggestion for a accurate and reliable light sensor.
Before people start to suggest sunrise/sunset solution, it doesn’t work great when it’s cloudy or rainy. So I believe an accurate light sensor is the way to go.

Just so you know: Dome and Coolcam are two different companies and use different firmware. One is not a re-branded version of the other. You can see this in their Z wave conformance statements.

But they are made in the same Chinese factory, and they use the same external case, as do several other Chinese companies. So even though some components may appear to be quite distinctive, particularly the ones with the red accent pieces, they may have different features because of the software differences.

Not directly relevant to this thread, but could be important in the future for other issues.

Back to the original question… Lux readings used for home automation are not usually finely calibrated, so it’s not unusual for them to have somewhat different readings from each other even when brand new. People just aren’t looking for the same kind of Precision as you would get from, say, a laboratory device.

I haven’t ever heard of any of the major brands, including Fibaro and Aeotec, changing over time. I’m not saying it’s impossible, I just don’t think it’s common.

The Fibaro is usually considered the best, I would just stick with those. You can change both reporting interval and the sensitivity on that device if you want.

If you are concerned about a “popcorn effect” by triggering off of different lux sensors Around the house, but you want to catch those cloudy day issues, that’s easy. Don’t use all the sensors.

Instead, pick one on each side of the house near a window and use that as the lux input for all automations in that zone.

That way all the lights in that zone will be operating off of the same trigger.

What JD says. My house faces southwest, so I use one sensor at the front (north) of the house for rooms at that end, and in the kitchen (faces south) for those at that end. Works just fine, but, as ever, YMMV!

First of all, my bad on claiming it’s a re-branded product without extensive research. My assumption was based on that there is a Homey app for Neo Coolcam but not for Dome, all I did was changing the Manufacturer ID in the driver and app.json to make Dome work with full functionality under Neo Coolcam driver. They have identical device type ID and device ID out of the box.
The 5 Fibaro sensors are all bought together but unboxed at different times, some of them 2 months apart, some of them 1 year. I have contacted Fibaro regarding the issue and they are not able to give me an explanation.
At the moment, my setup is exactly as you suggested, one sensor reading for a big area instead of data from each sensor. My concern is if the data accuracy keeps degrading like the 2 year old Fibaro sensor I have now, I’ll need to adjust the setting every few months.
Upon some research, is it feasible to build a Arduino light sensor with Fibaro binary sensor?

My concern is if the data accuracy keeps degrading like the 2 year old Fibaro sensor I have now, I’ll need to adjust the setting every few months.

How precise are you trying to get and what are the parameter settings on that device? Because it just isn’t something that other people have reported in the forum, or that I’ve seen in the Fibaro forums.

I’m going to tag @TheSmartestHouse because they sell a lot of Fibaro devices, just in case they’ve heard of anything similar. And of course @FIBARO_official

But I would not expect you to have to continually readjust if you are triggering off the lux values detected by a fibaro sensor .

Yeah, the Fibaro staff account is fairly new in the community, obviously they’re still working out their participation processes.

But we’re very glad to see them here, it’s always helpful when manufacturers have a community representative.

Although I bought about $3000 worth of Fibaro stuff(HC2, relay for light, gate and garage door, roller shutter for Somfy blinds, sensors, etc) about 3 years ago in anticipation of our new house. I’ve only started seriously testing all of them plus some Xiaomi sensors, Aqara curtain motor, ST and Homey about 2 weeks ago when the builder started digging. So I’ll need more time to see how much the lux reading differs as time goes on. One thing I’m sure is the Fibaro sensor I opened in 2016 gives the lowest lux reading, while the one opened in 2018 gives higher reading than the 2016 unit and the ones I opened last months gives the highest reading. They are all V2.7 and same 2015 Nov manufacture date. Hence my speculation they degrade over time.
I posted this issue when I compared 1 Fibaro sensor to Dome and Aeotec, but it pretty much went unanswered. I’ve spoken to Fibaro support on the phone 3 weeks ago about the issue they were not able to give me an answer unless I send them back to Europe from Australia, and my units are not covered under warranty because they are manufactured in 2015. Considering shipping + out of pocket repair cost will likely be more than buying a new unit, I gave up that idea and started trying other sensors like mentioned before.

Thanks for the tag @JDRoberts!

@halfcarrot would you be able to describe your goal automation in more detail as well as the issues you’ve experienced with the products you tried? We had really good experience with the Fibaro lux sensor, it’s very fast and quite accurate. Obviously, because these devices are usually fairly small and the lux sensors are tiny (Aeotec did redesign theirs at some point, making the lux sensor opening bigger after a wave of negative feedback), these sensors couldn’t be compared with professional meters. But if you already have a non-z-wave lux sensor you’re happy with, there may be a couple of Z-Wave options that could read and translate its values for you. We’d just need to know more details.

Another alternative not mentioned here yet is the Sensative Strips Comfort sensor.

@TheSmartestHouse My main goal here is to automate my blinds, curtains, general light and dimmer light through out the whole house based on a few factors, lux being one of them. Some area get more natural light than others, so a light sensor in each area would be helpful for energy efficiency. Although achievable by compensating the difference in reading, getting same or similar reading from different sensors will make setting up and making adjustment in the future a lot easier.

Being in Australia, I’m quite limited on Z-wave options. Problem with Aeotec sensor(bought in 2019 and returned) is, side by side triggering different lights on the same double relay switch, its motion sensing reaction time(highest sensitivity setting) is definitely longer than Fibaro, Dome and Aqara. The latter 3 are fairly similar in terms of responsiveness to motion.
It’s true that there are not really any dedicated Z-wave/Zigbee light sensor out there, maybe I’m being too fussy about it.

@JDRoberts Thank you for the suggestions anyways, and you’ve been really helpful.

You should be able to accomplish that with most of the Multisensors, including the Fibaro but are you saying that sometimes you’ll get a different reading from it in the same brightness environment?

Please consider chceking whether the parameters: 40 and 42 are the same in all your FIBARO Motion Sensors.

Additionaly, remember that in case of battery-powered devices, like Motion Sensor, you must wake up
the device in order to apply changes made to any parameter.

@FIBARO_official I have changed the default value from 200 lux to 10 lux and triple clicked the B button to force wake up and I can see these new values after refreshing the config page in HC2. I tested it first by cover them all up with a box then remove the box. I did this test while on the phone with your colleague, so trust me, I’ve tried everything.
I don’t know if you’ve changed anything in the Z-wave plus version that could affect this, but I don’t have one to compare to these older ones I’ve got.
In saying that, although most of your product are more expensive than your competitors, they are well worth the money. Of all the switch relays, roller shutter controllers I’ve tried including both Zigbee and other Z-wave brand, Fibaro is by far the most reliable. Also, I have owned Athom Homey and ST hubs, now I’ve gone back to my 3 year old HC2 simply because of it’s reliability. I’m now running HC2 as Z-wave controller and Xiaomi gateway (still waiting to try Zigbee2mqtt) behind hass.io to integrate both into one system.

The last post is from 2019 and this is the most recent thread. I need light sensing to help with cloudy days. Is the Fibaro still the sensor to beat? I only saw this and aeotec.

The last post is from 2019 and this is the most recent thread. I need light sensing to help with cloudy days. Is the Fibaro still the sensor to beat? I only saw this and aeotec.

Those two or the Sensative comfort strip, Which reports only temperature and lux. It has a 10 year battery and is weatherproof. But expensive. 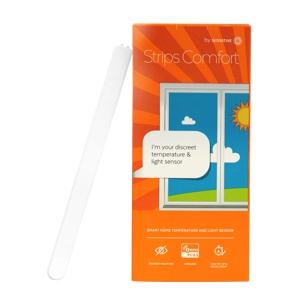 EFFORTLESS AMBIENCE PRODUCT HIGHLIGHTS Trigger automations and alerts based on accurate temperature and light readings Works perfectly for indoor and outdoor applications (DO NOT USE ON METAL SURFACES) Thin and discreet design is great for...

Well that’s only a couple bucks more than the others. This is cool and I’ve never seen it. I’ll take a closer look. Thanks!

Well that’s only a couple bucks more than the others. This is cool and I’ve never seen it. I’ll take a closer look. Thanks!

The Sensative devices are very cool engineering. They have a patent on their battery technology which is what allows it to be so slim.

@thesmartesthouse should be able to answer any questions about it.

I took a chance and bought it. We’ll see how well it integrates in a few days!

I just wanted to come back here to say that this turned out to be a great purchase.

I wrote some stuff in webcore to help with indoor lighting on cloudy days/early sunsets. It’s done a great job in the evenings and today has been the first cloudy day all day and it did really well. The lights now behave how I think they should behave based on the outdoor light intensity.

Solid product that’s a great compliment to my smart home ecosystem. I thought the price was fair/appropriate/good value. I’ll probably incorporate some outdoor temp to work with thermostats, later…
I’m pleased with my purchase. Thanks for the recommendation.