I am thinking of replace all the BR30 bulbs to be dimmable with zwave dimmer switches. I have 4 in living room, 4 in kitchen, 4 in dining room, and 4 in my office. I plan to buy Linear-WD500Z-1 dimmer switch: 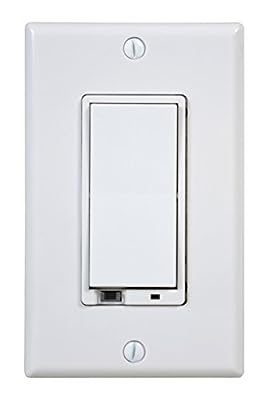 Thanks so much for any suggestion!

Hello everyone! Had an electrician put lighting into my media room (was the Den). He put in 4 pot lights (6 in) at 18in from the wall. We purchased the 65W equivalent LED Recessed Light Kits (retrofit) at 3000k white. With only 1 installed, found them way too bright. at “11 watts” I feel I need 4-6 Watt. I did order one of the new GE dimmable’s that work with all lighting types… so here comes my question. What are people doing in equivalent situations? I see Cree has a 40W equivalent , and I (believe) I can get the Satin Nickel Matte Baffle Trim which gives me the same look, at least 25W equivalent softer… Though I was hoping to try and find a roughly 30W equivalent… Does anyone have suggestions? Am I thinking about this properly? I will admit, the Nickel trim looked amazing, and I look…

In most cases, you shouldn’t use smart dimmers with smart bulbs. If you’re using a smart dimmer, get the cheaper (“dumb”) dimmable bulbs.

In most cases, you shouldn’t use smart dimmers with smart bulbs. If you’re using a smart dimmer, get the cheaper (“dumb”) dimmable bulbs.

Thank you and Ders for the tips!

But what’s the point for buying smart bulbs? The smart switch is too expensive?
So can we control smart bulb directly from ST and bypass the switch? If so, it make sense to buy it.

I don’t have any dimmer switch yet. I can control the dimmable level by ST app when I am not present, but what’s it like when I turn on the lights manually when I am at home?( it’ll be too complicated if I have to control it through ST App even I am at home.) It will remember the last dimmable level or every time it will turn on with full bright till I turn it down?

This traditional dimmer can keep it at certain level: 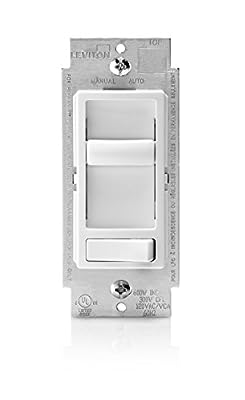 Leviton's 6674-POW SureSlide universal 150-watt LED and CFL/600-watt incandescent dimmer is a state-of-the-art device engineered to afford homeowners the utmost in control over the amount of light emi ...

See the following. In general, if the switch dims by reducing current, you use it with dumb bulbs. They might be Dimmable LEDs, but the bulbs themselves are not networked.

If the switch dims by sending an instruction via zwave or zigbee to the hub, the bulbs can be either smart or dumb, it just depends. But if the bulbs are dumb they have to be directly controlled by a smart switch that reduces current (it just doesn’t have to be the same switch that sent the original request).

If the switch dims by sending instructions directly to a smart bulb to dim itself (but doesn’t change current flow from the switch), then both switch and bulb are probably zigbee.

There are a few other brands that are other protocols, do check when buying.

I see a lot of topics where being able to point to a FAQ on this topic would help a lot. I’ve got a few personal rules of thumb for lighting installations, but I thought it would be a lot better if someone who’s written one of the ST dimmer handlers wrote it so they could mention anything ST or Smart App specific. So this post is definitely a request for a FAQ, not a FAQ itself. But just to get things started…Feel free to use, edit, or toss any of the following. TWO PHYSICAL WAYS TO CONTROL DIMMING Dimming is either controlled by the amount of current the switch sends on the wire to the bulb or the amount of current the bulb decides to draw from the wire. DIFFERENT KINDS OF SWITCHES A switch that controls the amount of current sent may be networked or not. Some switches don’t control …

Thank you and Ders for the tips!

But what’s the point for buying smart bulbs? The smart switch is too expensive?
So can we control smart bulb directly from ST and bypass the switch? If so, it make sense to buy it.

Some people buy one or two smart bulbs because they don’t want to have to replace a wall switch.

In addition, many smart bulbs offer more features, like being able to change color (from white to pink to green, etc) or color temperature (cool white to warm white). Or because the smart lights come in a form factor like LED strips.

But what’s the point for buying smart bulbs?

I think the appeal of smart bulbs is that they’re very simple to install. In my opinion, they don’t make much sense. Each smart bulb has its own internal switch, dimmer, and wireless radio, so you can use SmartThings to control it. But once you turn off the wall switch, the wireless radio in the bulb doesn’t have any power, so you can’t turn it back on from SmartThings. This means you have to stop using your wall switch, and always pull out your phone to control the lights.

Most smart dimmers dim bulbs by reducing the power current, just like regular dimmers. This doesn’t work with smart bulbs because the wireless radios inside them would stop working if the current is reduced.

what’s it like when I turn on the lights manually when I am at home?

Thank you all for the answers! Now I know what to do and buy!

Such a great community!

All of the other posts are correct, but I didn’t see it mentioned so I’ll add, that besides the dimmer remembering the last level as mentioned you can also use the smart switch to dim dumb bulbs without pulling out your phone. On my GE which I believe it is the same as the Linear you HOLD the on/up button to brighten and HOLD the off/down button to dim. And you can also use the smartthings app on you phone.

I have a ceiling fan with lights in my office. The fan of the unit is multi-speed, which has 3 speeds and off; and it has four light bulbs, which you can control off, 2 bulbs on, the other 2 light bulbs on or four bulbs on.

Can it be controlled by a dimmer?

it has four light bulbs, which you can control off, 2 bulbs on, the other 2 light bulbs on or four bulbs on.

Does your fan have a remote or is it just by pull string? a remote could complicate things if it is built into the fan. If there isn’t a separate wire for the bulbs you may have to hack the fan or just resort to using them all on/off at once.

as an alternative, I have a fan with three lights, I leave the light portion powered on and use GE Link bulbs so I can independently turn them on/off instead of using a dimmer. WARNING I do believe this violates the warranty on the bulbs and may cause premature failure.

to control the fan speed remotely you will need the GE fan speed control. 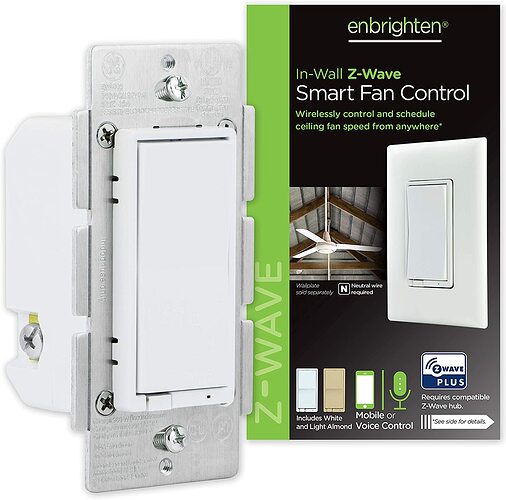 But, again if your fan has an integrated remote this would be problematic.

It’s by pull strings. No remote.

Can I leave it in a certain status (like moderate speed with 2 lights on) with a dimmer control? I am worrying it will break either the fan or dinner if they don’t match or work together.

Under ideal conditions, your wall box should include separate wiring for the fan and the lights. Connect the load for your fan to the GE Fan Control that @Ders linked to, and connect the load for your lights to your Linear dimmer. You should set the fan at full speed using the pull string, and then leave the pull string alone and only change the speed using the wall control.

If you don’t have separate wiring (i.e. the fan and lights have to be controlled by the same switch), then I would not recommend using a dimmer or fan speed control. Connecting your fan motor to a dimmer intended for lighting loads will break the motor, the dimmer, or both. Stick with a regular wall switch or a non-dimming smart switch. In this situation, the only safe way to have dimming functionality would be to use smart bulbs.

When we remodeled our kitchen 2 years ago, we added a half dozen can lights, and I replaced everything with LED lighting. The Feit brand lights that Costco sold for $18 each beat out the available alternatives I tried from Sam’s, Lowe’s, and Home Depot, including the retrofit LED can modules, which I agree were too bright and also too harsh. (The Feit bulbs I’m referring to are the floodlights that look like the typical incandescent lights, not the ones with the flat bottoms that look like the underside of a space ship). We liked the color and brightness of the light the Feit’s produced, have been using 4 of them on a Lutron Maestro dimmer along with another 6 on non-dimmed circuits. Haven’t had any problems, no noise, smooth dimming down to about 10%, went back for 6 more when we did our laundry room over last year. Now I see they are 2 for $17, so the costs are more reasonable. Of course with Costco, Sam’s or Lowe’s you never have any problems returning things that you don’t like or change your mind about. Homer and Amazon, not so easy.
One thing I noticed back then, and I believe all of the LEDs I tried at the time had the same ‘feature’, was a 1/3 to 1/2 second delay after hitting the switch until the light came on, which I noticed for about 1 day. Don’t know if the newer ones still do this or not.
Just got a ST hub a few weeks ago, purchased a few different dimmers to try out but haven’t had time to play with them yet, will post back here or another thread when I try them out.
Hey, if anyone has any recommendations on a great dimmable 60-75 W equivalent G-25 bulb for some pendant lights in our dining room, I’d love to hear about them. Thanks!

Thanks for all who helps!

The Linear switch is a great choice. What I put in my house. Replace all of my ~45 switches (well, except for the 11 switches still on bookshelf awaiting…still). All Linear dimmers with 1/2 dozen 3-ways and some on/off. Lights, we replaced our recessed ones with the Costco’s ($11 right now) and love them. No issues with dimming.

As far as dimmer switch vs smart bulb, I will add thing…

Do I have smart bulbs? 3 GE link bulbs. 2 along bed, one in floor stand light in family room. Use them for extending zigbee range for other devises. But also found in lamps, they are great. Bed lamp I use a minimote. Not perfect solution, but it works for now. And like ability to use the app to turn on and gently brighten room in morning (though that still doesn’t stop me from hitting snooze 3-4 times, which frustrates my wife sometimes).