I have been struggling for a cost effective solution for several 3 way and 4 way switches in my home that I can integrate into my ST hub. I tried the Aeon Labs micro controllers as I thought that would be cheaper than replacing 3 light switches, but my wiring is way too thick for the tiny little connections on that device, so I had to return them. Now I’ve ordered the Jasco/GE 3 way switch with slaves (45609 and 45610), but that’s about $80+ or so for each 3 way light setup. It seems it might be easier, and not much more expenisve to just buy bulbs and a hub (like Wemo or Lux). What are everyone’s thoughts? Also, if I already have ST, do I need to buy a hub for light bulbs?

I’ve got both GE Z-Wave switches and GE Link bulbs. The GE Link bulbs were a good way to (quickly and less expensively) test the home automation waters, but I’ve come to prefer switches. Although I can’t speak to other bulbs, the GE Link bulbs have been finicky at times, whereas my Z-Wave switches have been more stable. To maintain control of the bulbs at all times, I put a switch cover on those lights to prevent someone from turning off the light completely. This hasn’t gone over well with my spouse. On the other hand, the Z-Wave switches maintain control at all times without changing the way a person can manually turn on/off the lights.

For me, once I committed to automating my home, I decided the Z-Wave switches were a more seamless solution with better stability. That said, others may have different experiences with other bulbs.

For the Jasco 3-ways: If you go to Lowe’s, you can purchase a package with a single on/off and a single auxiliary for about $35. That’s MUCH less expensive than $80 for each light.

I prefer real switches over the bulbs. Why?

It gives me a physical control that works WITH the whole network. I can turn the switch on or off even if ST isn’t working (or working poorly) or if I’ve lost my internet connection. In contrast, if you use a smart bulb, the physical switch overrides the network (and you can’t turn the bulb back on until you turn the physical switch back on.

That helps a lot. Thanks guys. I’m having WAF issues as I just installed a ton of switches and sensors. I’m in the process of programming each scene and working out kinks. The switches will definitely be the way to go. She doesn’t get it. Next week once the Schlage Keyless deadbolt is in i think she’ll begin to appreciate it all more. If not, oh well.

most economical solution, and I find it are easiest to implement, is to use Aeon LAB switch in 3-way wiring with existing wall switches. cost only $33 for the Aeon switch.

How do you wire Aeon Labs micro switch in a 3-way circuit?

Next week once the Schlage Keyless deadbolt is in i think she’ll begin to appreciate it all more. If not, oh well.

My wife was adamantly against putting in door locks… I guess persistence paid off as I finally installed some locks and now she really enjoys them.

As has been noted in other threads (including the Major WAF Fail thread):

Yeah, that’s a key difference between the dimmers you have and the non-dimming micro-switches I’m using. I would not be surprised if the use of line voltage in the switching circuit is the root of theat last some of the issues. However, I’ve been having issues even after changing over to using the line voltage passed through by the switch, rather than tap in directly from line as the instructions show. Of course, the micro-switch on the SPST switch is still alive… Perhaps it has something to do with the difference between trigger modes. Beats me. Here are some pictures and drawings since most things have been described in writing. [image] [image] One circuit also has a four-way switch between the three-ways. [image] [image]

Look at diagram posted by llamas. 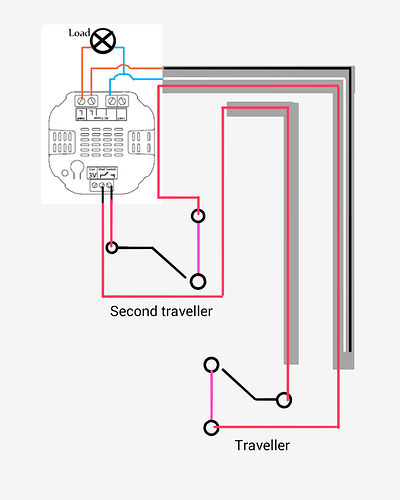