@sgnihttrams, your post goes back awhile. Did you ever get it working? I think I want to do what you were wanting. I want to have a few zwave door sensors wired by my security panel to a few zones and have them triggered by the already hardwired sensors. I want to still be able to use my alarm system as normal. I just want the added zwave reporting too. I know @geko was helping you a bit. But the post just stopped. This seems like it should be a simple thing to do. And relatively standard for most panels.
Thanks

Unfortunately, with so many other issues to deal with at the time that didn’t take any wiring or anything, I put it on the shelf.

I did get a couple simple relays that I was going to use for doing this as well as integrating my wired-together smoke alarms, but haven’t taken the time to get back to it yet.

Someday, I will probably go through it all again, and buy whatever is needed to just integrate it directly.
However, if you get anything going, please let us know.

Just bought one of the Fibaro universal sensors, I knew this was dual input but now I have it can see it’s much more than that.
It’s pretty much designed to sit in existing wired motion sensors or at control panel, pass the alarms on to the wired alarm but also turn the wired sensor into a z-wave device. I did play about with interfacing my Honeywell Galaxy 16 alarm via ethernet before- not easy, difficult to get motion features right and has notable lag. These Fib mini pcb’s really do provide an elegant solution.
You get to use 8-30 volt power from the alarm, choose better microwave/ PIR detectors than available for z-wave, and add temperature sensors if you want. Wish I’d know before I bought the “toy” Smartthings/ Fibaro/ Aeon motion sensors!
If you have wired sensors these are really worth considering- have a look at their manual to see interface. Only downside I see is the z-wave plus version isn’t out yet- shouldn’t be too far away though going by other product timelines.

I have bought an Arduino board and a Smarthings Shield and some day soon i am going to see about wiring to my existing Honeywell security system: 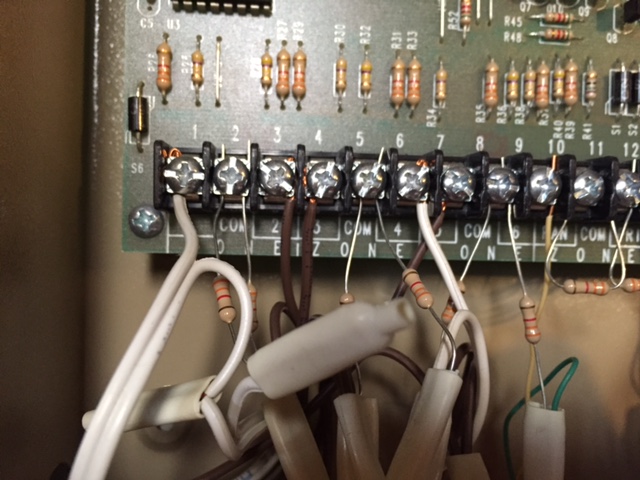 One thing you may notice on the old security system is that there are resistors that limit the amount of power making a loop on each circuit. This was necessary on the old system because the sensors may have been ruined if too much current was running through them.

Hmm, speaking from a place of total ignorance here, what would be the better approach?

I am trying to understand how Kendrick did what he did here, I even bought a SainSmart Board and a SmartThings Shield hoping to try this myself, but its a bit intimidating since I have never monkeyed with a security panel nor an Arduino kit before.

Professional alarm systems use analog inputs that can detect three distinct states: open, close and tamper. Sure, you can wire sensors to digital inputs and forgo resistors, but your alarm won’t be able do detect tamper condition.

I have tried this exact setup, but I can only get it to work either via the panel, or just the ecolink sensor. I cant seem to have it wired to both like you do.

I don’t require my Siren for my existing alarm and am going to use the 12V volt line off the panel that was originally going to the siren and attach a schlage door sensor. Then when siren was originally triggered, sensor would just send me alert instead. I understand the Schlage sensor cannot have 12V going to it. Do I have to install a relay? Or can I just use a resistor? A resistor seems much simpler. What Relay do I buy? Or what size resistor do I buy? Electrical knowledge…0. I run Nexia HA. Thanks everyone. I know there is a lot of discussion on relays and resistors here but not what types or sizes.

I really like this idea of using the Fibaro universal sensors. I have a Napco system that came with the house (it is fairly new) but doesn’t seem to be very friendly to integrate with any outside system. I’d really like to make use of all of the existing door, window, & motion sensors from that system in ST but still keep the alarm monitored.

I’ve read the manual for the sensor and it seems to do exactly what I want. Where can one buy these Fibaro sensors? I’ve searched and can’t seem to find them anywhere (maybe I’m not searching for the right thing).

You can purchase at Amazon; here’s the link:

if you try please publish the results; I would like to do as well but don’t have enough expertise and my panel is a Moose z1000(about 25 years old)

Not sure where you are, here’s a couple of sources in EU:-

I’m in US and I think zwave uses different frequencies here so the UK version wouldn’t work for me?

Select products are avalable at a limited quantity prior to our full release in several weeks.

Maybe it will be available soon in the US? I’m not sure how old that text is.

Chad, I am in the US also. I have looked at the fibaro and talked to them, as of a few week ago they do not have plans to support the US frequencies.

I see the last update was a few month ago, in new developments?

Let me set the stage for few more questions …
About a month ago I updated my Honeywell alarm to cell technology, since I was discontinuing my land line. I am in good with the person who monitors and was straight up about the limitations on Tuxedo. I am more interested in security than HA. Well not that I have played with HA, I really like it. Current my biggest hole is it does not support multi-channel devices. Of course it would be nice if it supported IP devices and Echo, but Tuxedo has some voice commands, but my installer suggested to turn voice commands off till the next update. He gave me a smoking deal on the control, thermostat, and garage door interface. I have added several light devices. Now we have purchased a new house, that was built about a year ago and is on the market because the owers were transferred.
It is a clean slate, no smart devices, including thermostat, and no alarm.

Still I would like a monitored alarm, but would like a more mature controller. Reading this tread release-honeywell-ademco-vista-20p-integrationI am going to stop here for now and see what responses there are:

I just moved into a house with a fully wired DSC system and am going to be looking into how I can smart-ify it.

It looks like the EVL-3 is a good way to go but I don’t think I can use it with my panel, which is a DSC Alexor (http://www.dsc.com/index.php?n=products&o=view&id=53) since that’s not in the list of compatible panels. Does this sound accurate? If so, I guess I’d need to upgrade the panel to a model which can take the EVL-3 (or 4) and then I’d be good to go. Am I missing anything?

It looks like the EVL-3 is a good way to go but I don’t think I can use it with my panel, which is a DSC Alexor

No, you can’t. Only DSC PowerSeries panels are compatible with Envisalink.

I’m almost in the same situation as you. At this point, I’m wondering if there’s an integrated panel out there that would be cheaper than the DSC + EVL combo

Hi all, I know this is an old thread, but I wanted to thank you all for the discussion and ideas here as it was really helpful to me in my project. Like the OP, I wanted to connect the wired door contact sensors and motion sensors in my house to SmartThings.

I ended up succeeding by using a NodeMCU ESP2866 development board, hooking up the wired contact sensors to the GPIO pins on the board, and programming it to post to SmartThings any time a sensor state changed. Works like a charm!

I wrote up a brief description here: Connect wired alarm system sensors to SmartThings with a NodeMCU ESP8266 [deprecated]

The code is here on Github: https://github.com/heythisisnate/nodemcu-smartthings-sensors

It consists of 3 parts:

This is my very first SmartThings development project and also my first time programming a NodeMCU. I’m really happy with the results, and looking for any feedback/criticism. If there’s enough interest I’d be more than happy to write up some more detailed documentation and package it up a little better for a community release.