The Internet of Your Things: Logging Activity in Your Home/Office

I posted a tutorial on using SmartThings plus Initial State to log the activity in your home/office. Projects like this take advantage of the most underrated aspect of the Internet of Things – historical data collection. This has been my favorite use of my SmartThings network at home.

Check it out at http://blog.initialstate.com/internet-of-your-things/.

Looks interesting… but unless those bits of data are somehow associated with an individual, how useful are they to the “head of household”? And then, you sorta face the thing everyone has dreaded: your every single move ever is tracked. Sorry, but even if I’m committing no crimes I still don’t want the world to know that this morning I raised only the toilet lid, while this afternoon I raised both the lid and the seat.

I can just picture the user-control freak Dad, watching his screen at all times. Little Jason exits the bathroom, and 40 seconds later Dad comes storming into his room: “Jason, you left the toilet lid up! And you only washed your hands for 13.4 seconds instead of the 15-second minimum, and the soap dispenser monitor says you’re using three milliliters more than you need when you wash, and your toothbrush monitor says you haven’t used it since this morning…”

Oh I already do this…

See the Blue and Red second graph down on left? Those are my kids computers, if they don’t turn them off when their timers expire, they get grounded for a weekend. The yellow and orange below that are my wife and my computers.

But the most important is the Stove, my wife is bad about leaving it on. I get a notification from the system if it’s been on for more than an hour, and I have these graphs up at work most of the time with a tablet in front of them with SmartTiles.

My family has gotten VERY good at turning stuff off when not in use! 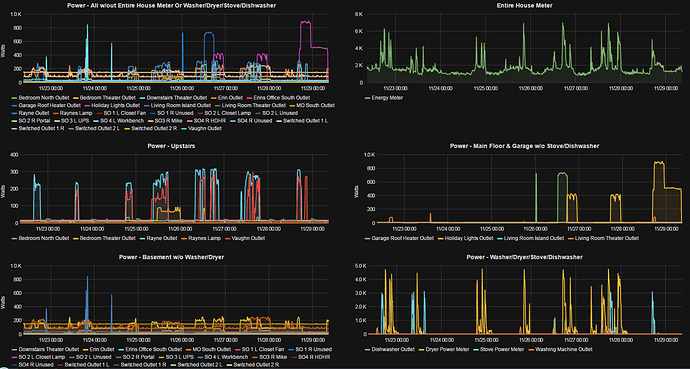 Of course. But aside from that sort of control-freak stuff, what is the VALUE of collecting all that data? THe OP states that such data collection is a trillion-dollar business - but that is only if there’s a way to utilize that data to bring value to our lives.

I’m just not seeing the added value in my life of knowing the toilet was flushed 11 times yesterday, 13 times the day before, 11 times the day before that… will it help me predict when I need toilet paper any better than looking in the closet, and noticing that I’m grabbing the last roll on the shelf?

It seems a great deal of work, without much payoff. I admire the effort in putting it together. But I still need to see the VALUE in it before making it happen in my home. The OP’s blog emphasizes the collection of the data itself, but makes very little mention of the value provided by collecting and analyzing all that data.

I’ve cut my electric bill by a good measure. The time I put into setting this up has been paid for a few times over since I started I bet.

I also see things that are out of the norm. Doors left open that shouldn’t be allowing heat/cold to go where it shouldn’t for example.

The toilet monitoring you keep alluding to would be useful for water usage estimates, every open/close could count as a flush, know the gpm of the toilet, do some math, see if your city is billing you correctly. To continue that, I monitor power for washer/dryer/dishwasher, so I can calculate water usage based on number of cycles there as well. Only the taps in my house aren’t monitored. But hell, stick a sensor on the faucet’s, know how long they are open, done.

There are a lot of things you can do with this data, most probably not so obvious at first.

I see how many times a door is opened and closed, when it’s to my garage which is unheated, if it’s a LOT in a short period, I can mention to my family that maybe they should try to slow down, make one trip for everything, only open it once. Stuff like that.

I don’t consider myself a control freak, I do consider myself a habit changer. There’s a difference at least in my mind. And my smart home has made it really easy to change peoples habits to save money and resources.

Have I paid of the smart home stuff yet? No, maybe in 3-4 years I will though.

The value can also be in peace of mind:
"Is the house-sitter throwing a party? What time did the kids go to bed last night? Did the nephews break into the liquor cabinet again? Did someone let the dogs out to potty?"
This can be quite important if you are monitoring an aging loved one from afar (see http://blog.initialstate.com/diy-remotely-monitor-your-aging-loved-one-smartthings-initial-state/).

I plan on setting this up for the monitoring of resources. I have 8 people in my household and cutting back anywhere I can adds up very quickly…

Not being a control freak, just finding places to put in resource controls…

Like 5 Minutes after the kids leave for school all of their rooms are completely shut down… Just in case they forget something… Simple little things that add up quickly.

One of the easiest savers I did was tell the kids as soon as they left for school their rooms would shut down. They learned real quick to save whatever homework they worked on in the mornings.

How much are you spending in sensor batteries and labor/time to get there?

I’ve cut my electric bill by a good measure. The time I put into setting this up has been paid for a few times over since I started I bet.

I don’t consider myself a control freak, I do consider myself a habit changer. There’s a difference at least in my mind. And my smart home has made it really easy to change peoples habits to save money and resources.

Have I paid of the smart home stuff yet? No, maybe in 3-4 years I will though.

Don’t get me wrong, I’m not knocking it (I’m mostly using it for a bit of humor in the moment) for those who can truly get something out of it. Just given the average family is nowhere close to a ‘smart’ home and really doesn’t have the time or inclination to get there (heck, most people don’t even get round to pulling the weeds!), deploying it for this level of personal analysis seems a tough sell.

My time isn’t really something I’d count, in my case, this is a hobby. That would easily run into the tens of thousands I’d bet!

The actual graphing took a few hours of time to setup and a few more to tweak, maybe 8-10 total. All my actual automation’s is what took the most time. Setting up the system and sensors isn’t too bad, automating it with the complex crap I’ve decided to try, that’s a time sink.

If the “average” person thinks they want HA, they will learn after buying that fancy WeMo switch very quickly how bad an idea it would be to try without actual dedication. I still don’t believe HA is ready for mainstream use. Individual things, like the Ring doorbell might be, but not TRUE automation.

Now the caveat to this is JUST power monitoring. Setting up a bunch of smart outlets, hub, and graphing, you could get it done over a weekend. That would be more than enough to start saving lots of money. I have Harmony’s, Echo’s, Kuna’s, DVR’s, so many motion and contact sensors, etc. Most people don’t need any of that crap to realize the energy saving benefits.

Stupid forum keeps blocking c r a p. That hasn’t been a bad word since the 1800’s!

Oh and my entire house uses only LED’s, how many folks still have incandescents? If my savings is that much a month with LED, theirs would be HUGE with incandescents, lights and computers are what’s left on the most in my house, lights by a wide margin.

Oh and my entire house uses only LED’s, how many folks still have incandescents? If my savings is that much a month with LED, theirs would be HUGE with incandescents, lights and computers are what’s left on the most in my house, lights by a wide margin.

Mine is a mix. Because there remains a factor I mentioned elsewhere: the wife factor. To go whole hog into this would could easily result in divorce! That would certainly save time and money though, hmmmmm…

Seriously though, it’s an issue. Acceptance of this stuff is slow. I will say that she got used to the presence sensor unlocking doors and switching lights on, such that when the battery gave out she started complaining.

And now that my testing to coordinate Alexa and GoogleNow/Tasker is complete and she’s no longer bombarded with me saying “ok google” and “alexa…” over and over and she can see what it does, she’s starting to get it.

I’ve had an idea for a smartapp for a while, just no time to make it…

It would basically subscribe to your devices calculating actual on time and give you add close to a real world costs as you can get.

The learning curve for Splunk, Solarwinds, any other NMS type solution is too high for any average person. Initial state is probably the easiest way to quickly get into this. Even Grafana/InfluxDB takes a lot of know how. I don’t think there’s a SA for Splunk or if there is I’ve missed it.