I have the STH-ETH-250 hub, every device I have is Z-wave. I plan on buying some Alexa Echo devices. Will these work and communicate with my hub and Z-wave devices?

You could set up a bunch of virtual devices and do work to keep them in sync. I’d suggest getting Meross devices if you are intent on Wifi. Meross integrates well with Smartthings, and are shared with, and controllable with Alexa.

I have not added any devices directly to Alexa. I use the ST skill to make ST devices available to Alexa and forego the pains of the virtual device world.

I have the STH-ETH-250 hub, every device I have is Z-wave. I plan on buying some Alexa Echo devices. Will these work and communicate with my hub and Z-wave devices?

Short answer: you will probably get the outcome you want, but not the way that you expect.

The SmartThings/Alexa integration, regardless of whether the end devices are zwave, zigbee, or WiFi, is cloud to cloud at the ACCOUNT level, not the device level.

Your Echo devices never talk directly to any SmartThings-controlled device.

End result: you tell the Echo device, “Alexa, turn on the kitchen switch.” The kitchen light comes on.

So…if you have zwave devices connected to a smartthings hub you will be able to control most of them through the official SmartThings/Alexa integration. But that integration is cloud to cloud based on the two accounts. Not direct communication.

You will have very limited ability to control the Echo devices themselves from the ST side. They won’t show up as devices in the ST app unlike, say, Sonos speakers. But even in that direction you will be able to do some things through Alexa routines, like have an echo device make an announcement when a specific door is opened (where you have placed an ST sensor).

Even without an Echo device, you should be able to install the Alexa app on your phone and link your ST account to see how well everything works.

You don’t need virtual devices just to use voice control to have Alexa turn a zwave switch connected to a ST hub on and off. That’s part of the standard ST/Alexa integration.

Technically it’s Alexa asking SmartThings to do it, but the outcome is the same.

You use virtual switches when you want to go the other way: have a SmartThings routine cause Alexa to do something without using a voice request, but that’s not what most people are trying to do when they first start out.

Thanks for all the replies. The good? news is I have no interest in having ST talk to Alexa. I will, exclusively, have Alexa talk to ST devices. If I’ve read all the replies correctly, Alexa can talk to my hub.
KenW. I’m not a tech guy. Not certain what a “virtual device” is. Is Meross just a brand name for ST devices, similar to Aotec?

Not certain what a “virtual device” is.

Unlike many platforms, SmartThings allows you to create a dummy device that exists only in the software, not as a physical item. So it shows up in the app, you can turn it on and off (although nothing happens except the status changes in the app), and you can use it for integrations with other platforms in some cases. It’s just so you don’t have to keep buying extra physical devices when all you want is to have a way of communicating with another system. You’ll see them discussed in the forum a lot, but it’s an advanced step that most users never find necessary.

Is Meross just a brand name for ST devices

Meross is one of the many third-party companies that provide an integration between their devices and smartthings. When you open the SmartThings app and choose “add a device” you can see which brands have at least some models available in this fashion in your region. 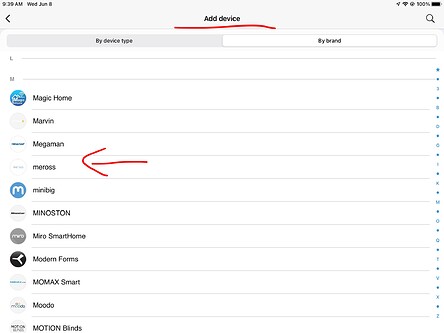 Or if you looked in the app under device class, in this case “outlet “: 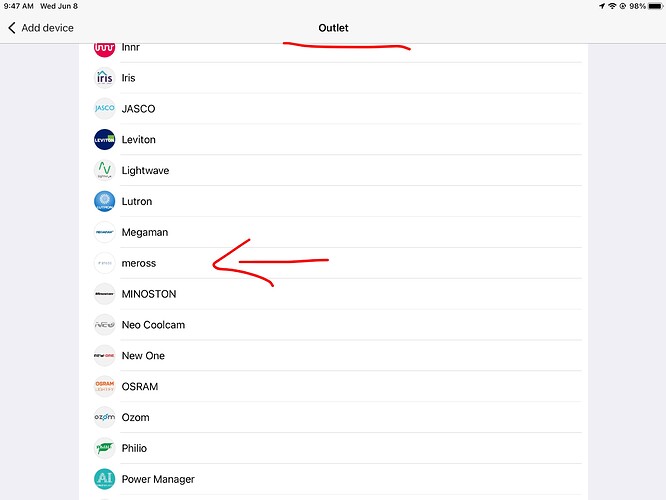 It’s a good brand for Wi-Fi devices. Excellent safety features, very good prices. I use a number of these in my own house. But just one of many companies with SmartThings integration.

Aeotec is in a different category. Two years ago when Samsung decided it no longer wanted to sell “Smartthings” branded home automation devices, it partnered with Aeotec so that Aeotec would market the exact same devices but under the Aeotec brand. Initially they were just the exact same devices with a different logo. This gave Aeotec a line of Zigbee devices, something that it wanted, and let Samsung get out of this part of the business. (Aeotec had previously been a major manufacturer of Z wave devices, but no Zigbee.)

I will, exclusively, have Alexa talk to ST devices. If I’ve read all the replies correctly, Alexa can talk to my hub.

Again, not quite, but The outcome is the same.

many people won’t see that as a significant difference in any way: you get the same result. You tell Alexa to turn on the light, the light comes on.

But for those of us who are technical, it is a big difference, which is why you’ll get people like me saying “almost, not quite, but the outcome is probably the same.“

Again (I know, sorry, I’m a network engineer, so I care about a lot of little things other people don’t care about at all) that’s not how it’s going to work, but the outcome will be the same.

Echo won’t use its Zigbee at all. It will use its Wi-Fi to talk to the Amazon cloud. That’s why this integration will work with any echo devices, even the ones like the dots that don’t have a Zigbee radio inside.

Then the Amazon cloud will send a message over the Internet to the smartthings cloud, making the request.

One reason why this is important is that an echo that has a Zigbee hub inside does have a very limited amount of local processing which will work even if the Internet is down. I use this at my own house for some backup systems so I can use voice control to turn on a pathway of lights from my bedroom to the front door even when the Internet is out. (I am quadriparetic, use a wheelchair and have limited hand function, so voice control is a really big issue for me.) but that’s only for Zigbee devices that are directly connected to that echo device. Not for the SmartThings integration

But at this time most Echo processing requires Internet. Including any requests to Smartthings.

Agreed. I do what you said. OP was asking for th opposite. Alexa devices controlled by ST.